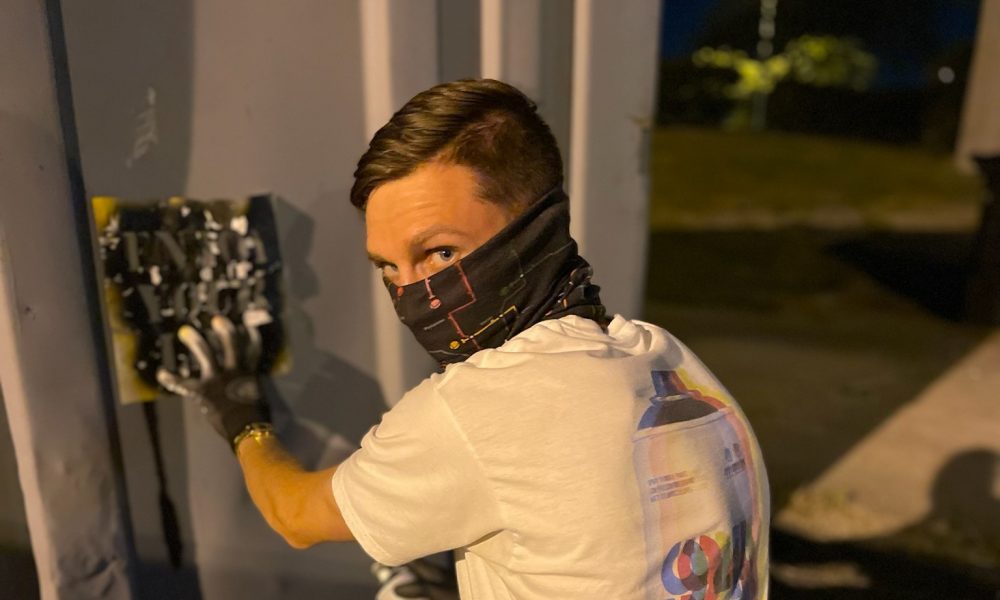 Alright, so thank you so much for sharing your story and insight with our readers. To kick things off, can you tell us a bit about how you got started?
HIDA; hider, hidden: hidden in plain sight.

Spray-painting under tunnels, bridges, anywhere low-key, or even out in the open, graffiti art is about visibility and risk. The irony though, for me, is staying elusive and hidden in identity. Even I didn’t know who exactly “HIDA” was, not until a few years ago. Walking through the rumble of right and wrong, what people choose to look away from in a city—the poverty line, homeless, the roughest of rough—it’s what many graffiti artists do: they just want to say something. Say anything. Saying what’s on the tip of everyone’s tongue but nobody feels like that will work: that’s where HIDA was born.

Influenced by MECRO, Aches, PichiAvo, Bansky, and many other visual artists in that vein, I began putting my words to the wall. Tired of seeing a dull, stagnant cycle, I picked up a brush, can, anything, to colorize the world around me. Street corners, electrical units, and any passage of traffic became my work base. Being a dyslexic man in my early 30s, words have always been a part of my struggle but also part of why I create. When you jumble or misread language, you learn to manifest your own in a way. You learn to create your own realm just by speaking it into being, and in the HIDA way, just putting it out there.

Words and symbolism are a huge part of graffiti. Subliminal, political, and even just verses of rage or violence-related, it’s cathartic and most always community-related and public. “Made you look,” it’s much more than that, but at the same time—just that. For a moment, you’re looking away from the hardships of an urban environment and seeing a little bit of color in a grey space. Your brain can hyper-fixate on something unusual or outside your normal scope. Being an artist, to me, brings on that context of looking from the left (logic) and right (creative) sides of the brain.

One day, be the brush, and another, be the brain:

Right: Just express yourself. Just act. The right side is scouting new spots, photographing, and accessing the “how” and the “when” of picking a public spot to create and just doing it. Right is in plain sight. Right is the trash collector, policeman, or bus driver doing their work in the public. This side is indefinitely open and free flow.

Left: Think in strategy. The left always tests the means, methods, textures, stencils, and hand style at the edge of “crazy.” This side lives in the shadows of truly conceiving an idea, perfecting the art, the message, and intent. The left is the person under the curtain, the analyst, the thinker, and anyone who has a regular job but has a deeper, inward world that longs to perfect their art. To me, the left side stays “hidden” and will indefinitely.

Would you say it’s been a smooth road, and if not what are some of the biggest challenges you’ve faced along the way?
In many ways, the “right and left” narrative speaks to my older brother who passed away in 2020. A talented artist who worked in mixed media, he was left-handed and I right. Born a gifted and brilliant artist, my brother always strategized his work—through compelling puns, hyperboles, and many double entendres. He didn’t just create to create; he spoke from the “left side”— to push, test, and show your ideas. Even if no one sees that process, an artist’s job is to test their own work first. As brothers, I always felt like my “right” must honor his “left”; all of those funny, clever words of his left unsaid. A lot of HIDA is a legacy to Him in that way—to continue his unfinished work, test what can be done, especially through visuals and words: Just say it. Then, regroup, throw that idea completely out the window and start over again.

Can you tell our readers more about what you do and what you think sets you apart from others?
Putting the left and right together is key. Just creating is healthy (right) but doing anything without meaning is pointless (left). That left side seeks to discover purpose. Spreading positivity, standing up for someone, adding color in the city, and being an orange, a blue-green, a vibrant red in a somewhat plain, monochrome urban landscape—all of this means stopping, looking, standing out, and doing it with intent. Testing and toying with city workers, “Don’t paint over this,” and when they do, “I like this colorway better,” also speaks to the playful side of my visual art.

This kind of art is not causing real harm. Compared to the amount of littering, discarded beer cans, partygoers leaving debris, my work doesn’t do damage in the city. They’re small acts in the grand scheme of things. Sometimes, it really is about looking out for others in the city: placing a piece of tape over a rusted hole in a drain cover and scrawling the words “CAREFUL! Hole here!” It’s pointing out inefficiencies and problem areas in the city too, especially in low-income areas. Graffiti can be a small word, a vast mural, or a concrete message for a passerby. Really, the call to action is to look, think, and decipher no matter what the piece says.

Currently, I’m working on a piece based on the Benjamin Franklin idiom, “The only guarantees in life are death and taxes” but rewriting that grim message to call more community involvement. Being alive today means you owe something to your community until the day you die. This shouldn’t have to be a burden, however. It’s a privilege to help others—to hold each other up, without all the virtual signaling and limelight, and just be involved. Putting art out there as HIDA is that to me: I want to catch someone’s eye and maybe, inspire their hidden side to open up too. 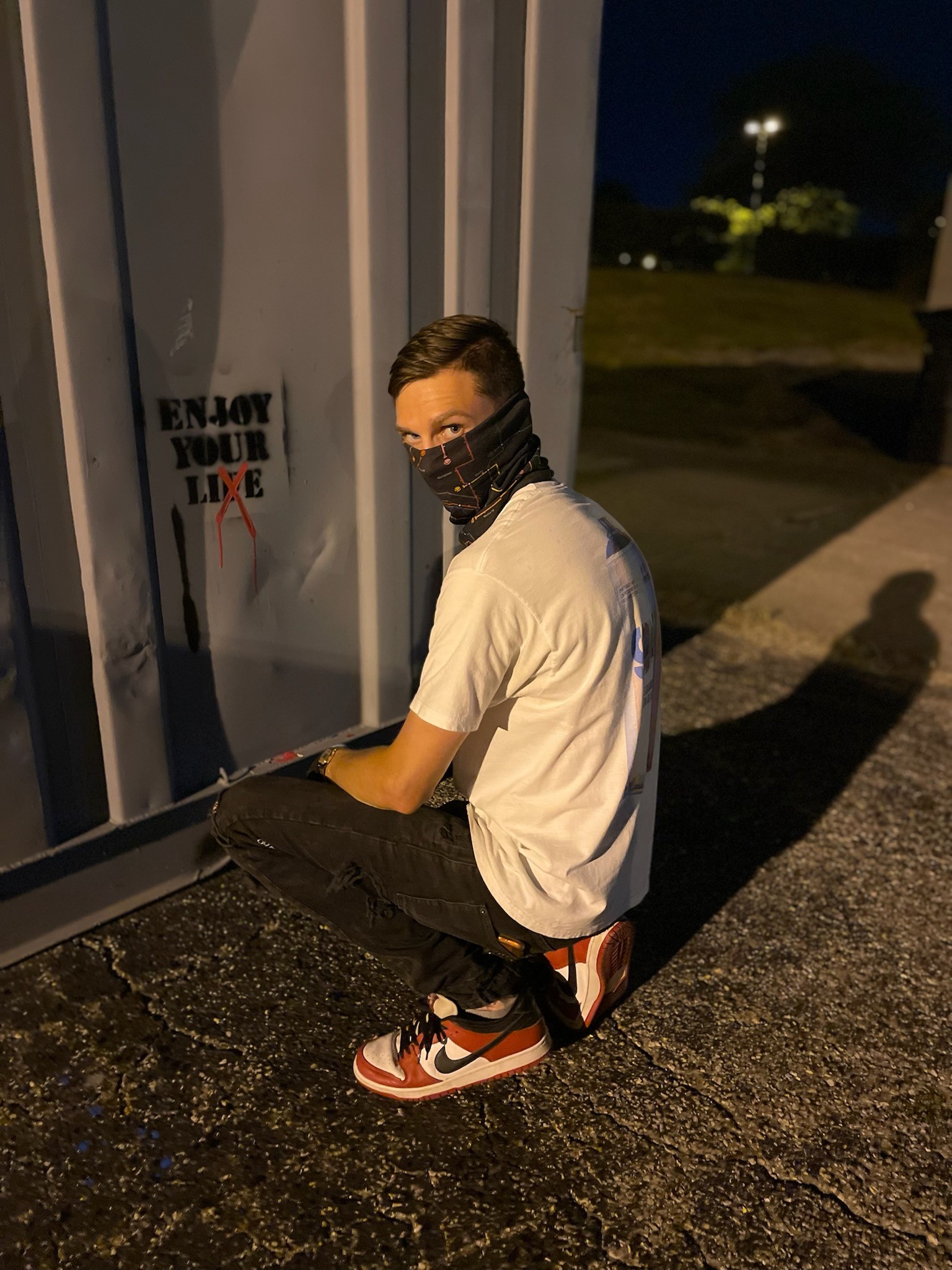 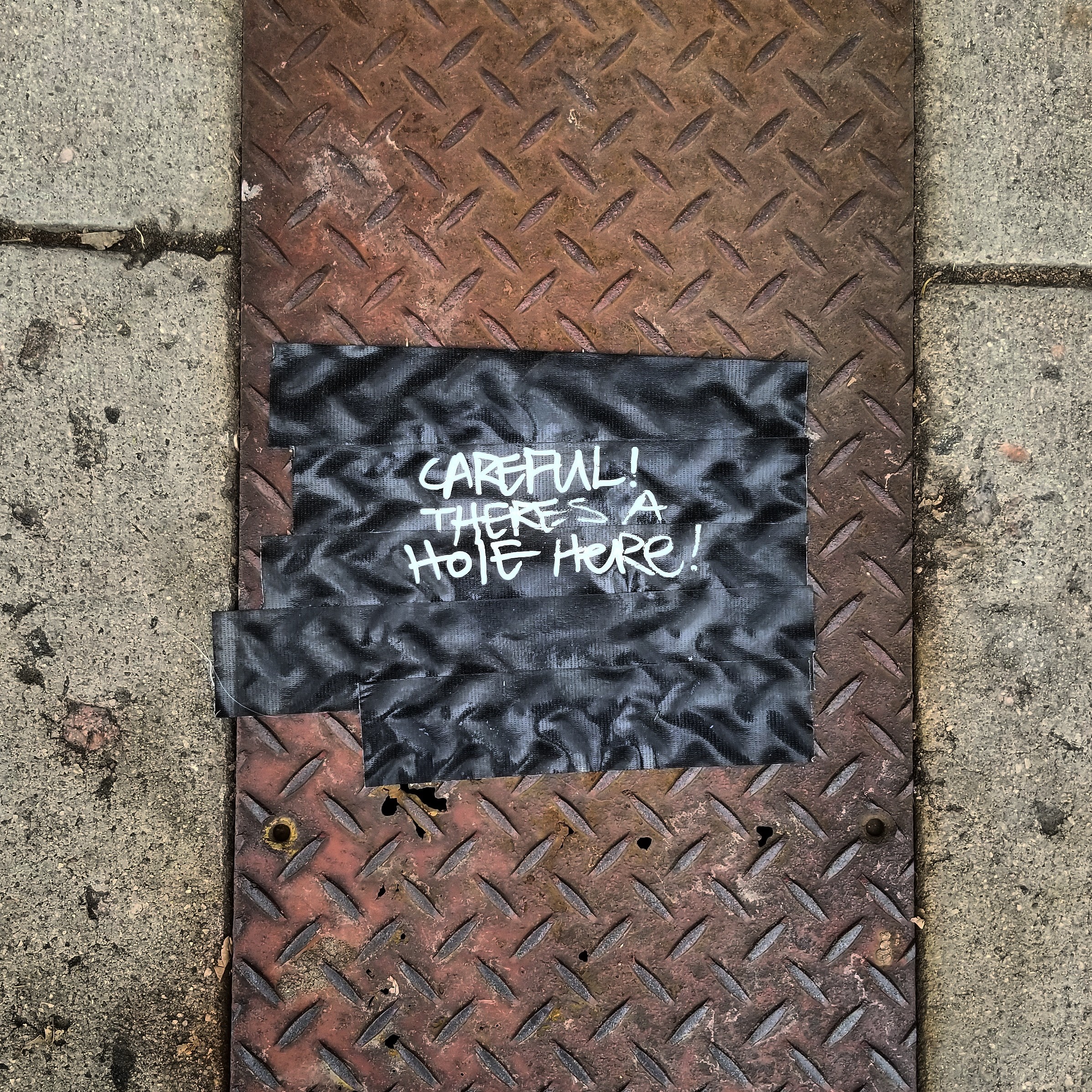 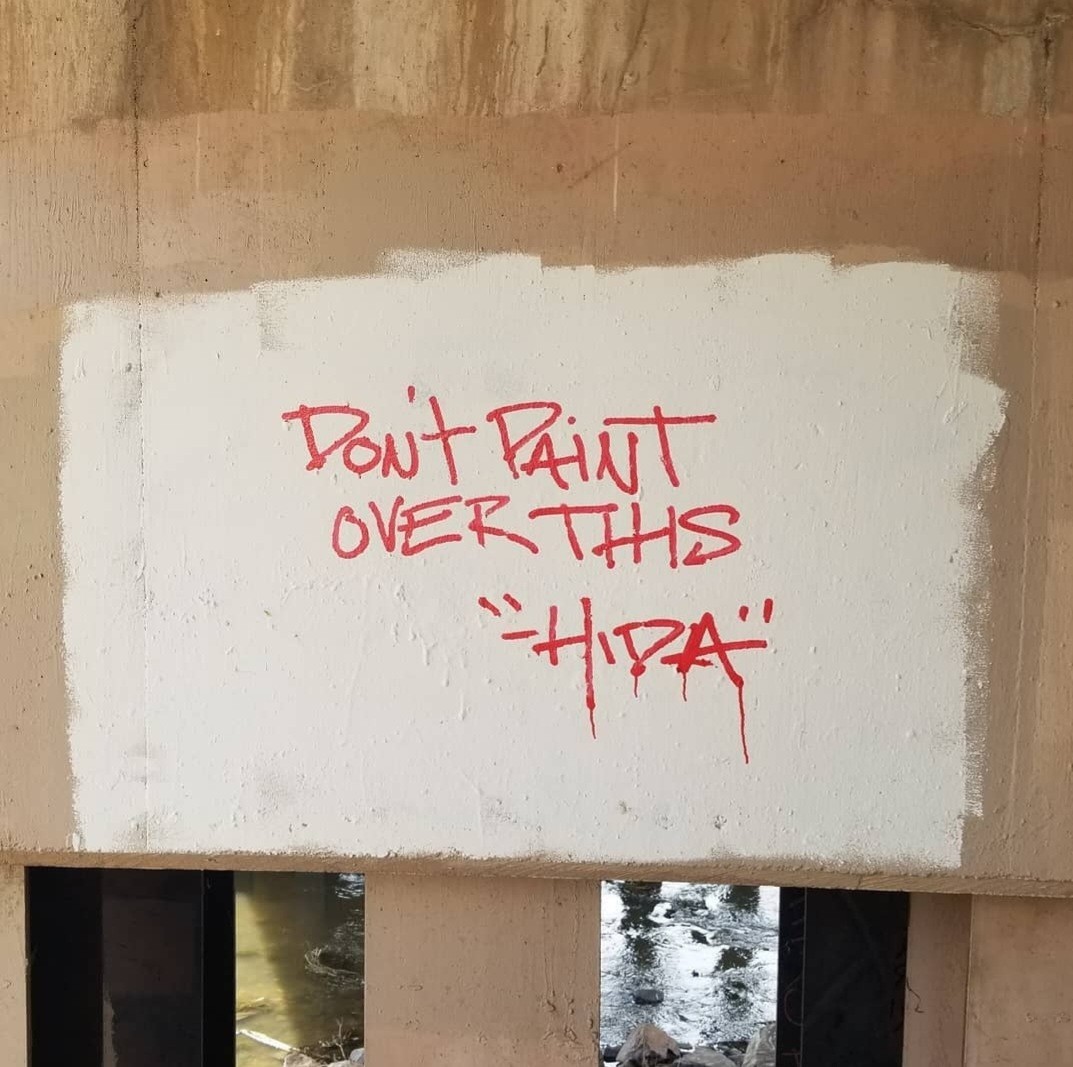 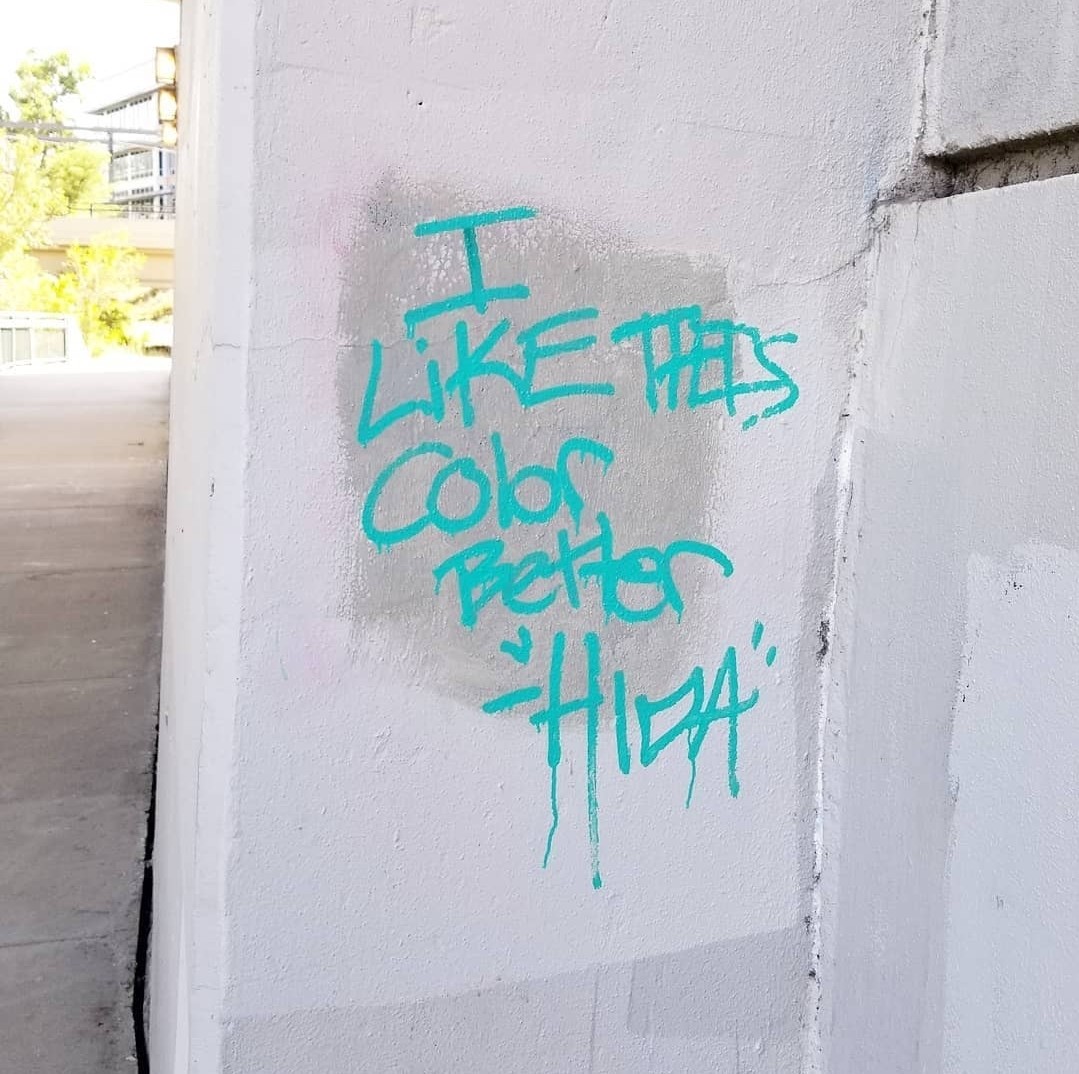