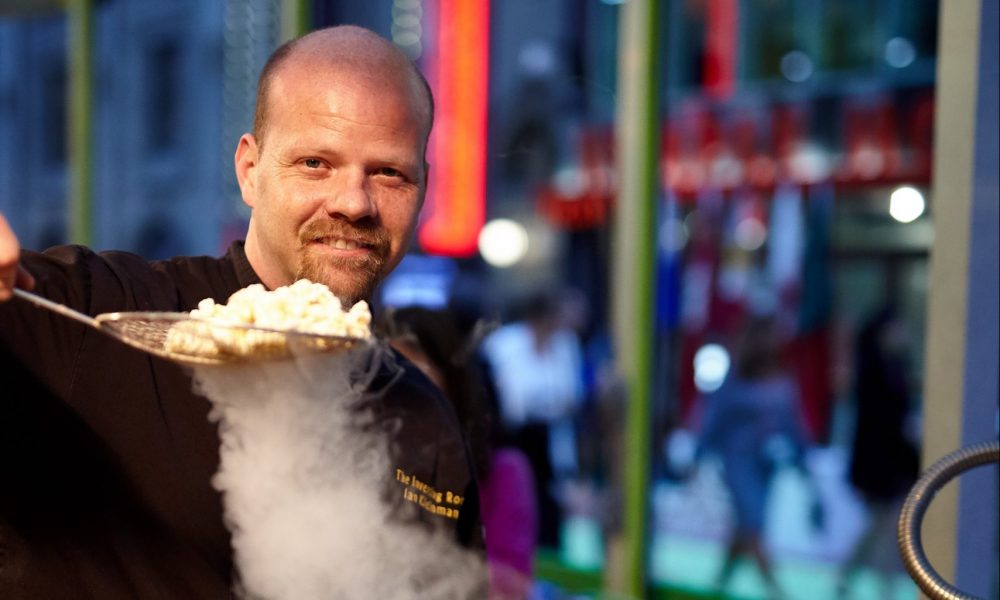 Today we’d like to introduce you to Ian Kleinman. Them and their team share their story with us below:

Ian was born and raised in Colorado in a food-centric household. His father was a chef and his mother cooked household meals for their family. Ian’s greatest culinary influence in the family was his grandmother who cooked and still cooks at 96 years old authentic German cuisine. At the age of 12, Ian started cooking in a restaurant his father owned in Breckenridge.

Ian’s kitchen career came about after he graduated high school and moved to Denver. His first serious job was at the Westin Tabor Center working on Augusta’s 4 diamond line. He started culinary school and focused on baking, sugar and chocolate work. Chef Ian was invited to his first national event cooking at Cuisines of the Sun in Kona, Hawaii. Here he met Allan Wong who would change his outlook on food with one sentence. “After you cut this tomato, it will never be the same- Not in taste, texture or flavor- Respect the food.” Ian began to experiment with food and found a new food enlightenment. This philosophy would take Ian’s career path to the nationally recognized Rattlesnake Grill. Here he worked with world-renowned chefs Tim Anderson and Jimmy Schmidt. He found this experience would lead him to join the Concept Restaurant Group in Colorado which led to the opening of the popular Rialto Café and the assistance of redesigning Table Mountain Inn in Golden, Colorado.

After his tenure, Ian would find himself falling in love with the mountainside city of Golden, Colorado stating “It reminds me of the people and small town I grew up in.” This profound discovery led Ian to open the Hilltop Café. This venture would later become a very popular and well-known fusion bistro in Golden. His passion began to bring in rave reviews from the Colorado press. Rocky Mountain News gave the Hilltop Café a top five nod in Colorado’s culinary scene. Westword would then name Hilltop Café the best fusion restaurant in Colorado. To which the Zagat guide gave Hilltop Cafe an astounding 27 out of 30 for food. Ian found himself being recognized nationally with his first invite to the acclaimed James Beard House in New York. Hilltop Café’s renowned success was due to its use of what would later became a worldwide food movement of utilizing local fresh ingredients and the use of unusual takes on global ingredients.

After the Hilltop Café’s success, he would move out of Golden and down the mountain to the prestigious Cherry Creek shopping district of Denver opening the Indigo restaurant. Indigo showcased Ian’s unique cuisine and thoughtful presentations that he placed into every dish that left his kitchen. After the opening of Indigo, The Denver Post would soon come to place four out of four stars to Indigo stating,” This is why we have been perfecting cuisine all these years”. The Westword and The Rocky Mountain News would follow with their high praise and excitement for Indigo. This second renowned success would lead to Ian being invited a second time to cook at the acclaimed James Beard House in New York. Ian was then recognized as the featured chef in November 2002 Restaurant Business. The buzz of Indigo would reach the ears of the culinary giants at the New York Times, which went on to feature Indigo as the restaurant to be at in Denver, Colorado.

Ian would stay in Cherry Creek following his success with Indigo and moving on to his next venture with the Sullivan Group; he was asked to assist in the opening of the 975 restaurants while simultaneously becoming the Executive Pastry Chef for Emogene and Mao. Ian’s continued success allowed him to be honored with an acclaimed induction into the Colorado Institute Hall of Fame.

Ian made a radical move and decided to venture out to Beverly Hills in January of 2005 to open a super club named Aqua in the well-known Golden Triangle District. Aqua catered to several Hollywood special events which included; Premier Magazines Oscar Party, Terry Hatcher’s book release for Burnt Toast and specialized parties for Prince Nicholas Cage and Dennis Quaid. He was later quoted stating, “I enjoyed the opportunity to work in the glamorous and every changing L.A. but this is not a place to raise my family.”

In 2006, Ian joined The Westin Westminster as Chef de Cuisine of O’s Steak and Seafood; in which Ian had the opportunity to focus on some of his signature dishes and experiment with food science, which would later overtake his entire passion for food. Chef Ian’s signature tasting menus became a focal point on the Colorado dining scene bringing in guests from around the world to enjoy this unique and delicious fare. Steve Shaw of eGullet was quoted as saying,” Chef Ian’s meal was one of the best of the year and one of only a handful that has stood out in the past five years.” He would simultaneously become the General Manager and Executive Chef at O’s. His hard work and passion would afford him the opportunity to help Starwood Hotels and Resorts with some of their projects including; the opening of the newly acclaimed St. Regis in Ft. Lauderdale, Florida. Ian’s success would give him the prestige of being asked a third time to cook at the James Beard House in New York during his tenure with The Westin.

In 2009, Ian would make the biggest move of his career and open Catering By the Inventing Room, a catering company focusing on food entertainment. The philosophy of Ian’s creation is to bring techniques developed in a fine dining kitchen to the masses. The Inventing Room focuses on creating events that give his guests a new and innovative experience, creating food that is seemingly impossible. Ian’s career continues to bring success and inventive culinary triumphs, as he & his wife, Stacey, opened their first brick & mortar in 2015, The Inventing Room’s Dessert Shop, located In Denver, as well as a couple of storefronts in Dubai.

I’m sure you wouldn’t say it’s been obstacle free, but so far would you say the journey have been a fairly smooth road?
It has not been a smooth road, there have been many bumps in the culinary road. One of the first lessons I learned the hard way was the importance of obtaining a guarantee for catered events. I had been approached to participate in a very large mountain food event in which the planner over-promised and exaggerated the sales I would receive. I spent days preparing food for the event, purchased and rented a lot of equipment to ensure the food would be fresh, hired additional staff and headed up the hill. I was devastated when I finished the event and had to stop at the dump to throw away large amounts of food, and my sales were only about 15% of what I had anticipated, meaning I walked away losing a very large amount of money. We never cater events or participate in events without a guarantee now.

Thanks – so what else should our readers know about The Inventing Room ?
I like our brand because we have taken the child-like whimsy of Willy Wonka and turned it into an experience that people can enjoy. One of my favorite things is from young kids to grandparents, we are able to connect with kids and adults though our scientific process. Our small company allows us to make quick decisions and be experimental & creative in our work.

Before we go, is there anything else you can share with us?
We are starting to write a cookbook called “Impossible Liquid Nitrogen”, where we will explore previous dishes and experiment with new techniques. For example, “The Superconducting Sugar Cage” is made by cooling superconducting pucks to minus 320 degrees Fahrenheit and floating a 2″ by 2″ rare cylinder earth magnet. The cylinder is spun and Isomalt is threaded along the moving magnet. The sugar cage is formed and slid off to use to garnish desserts. 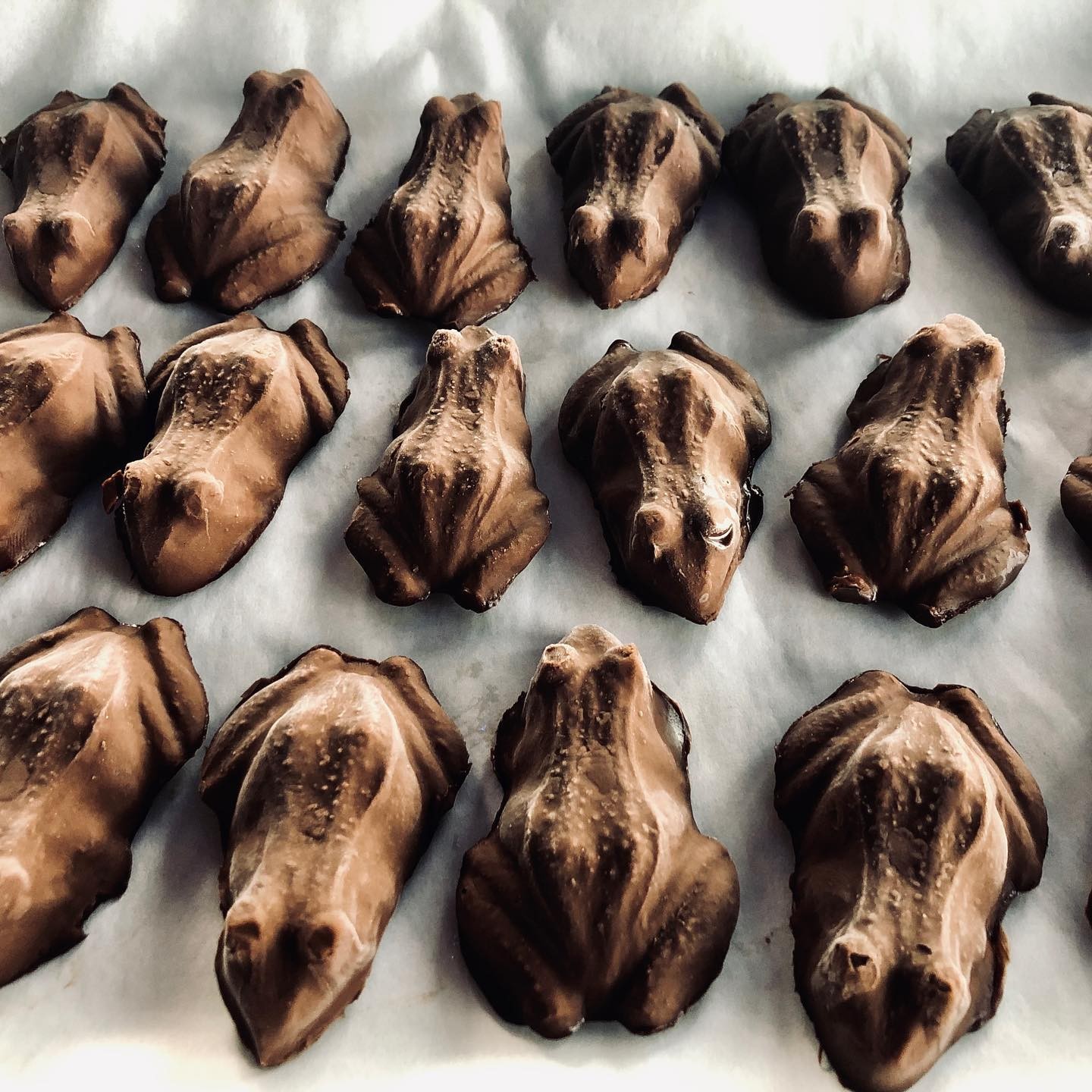 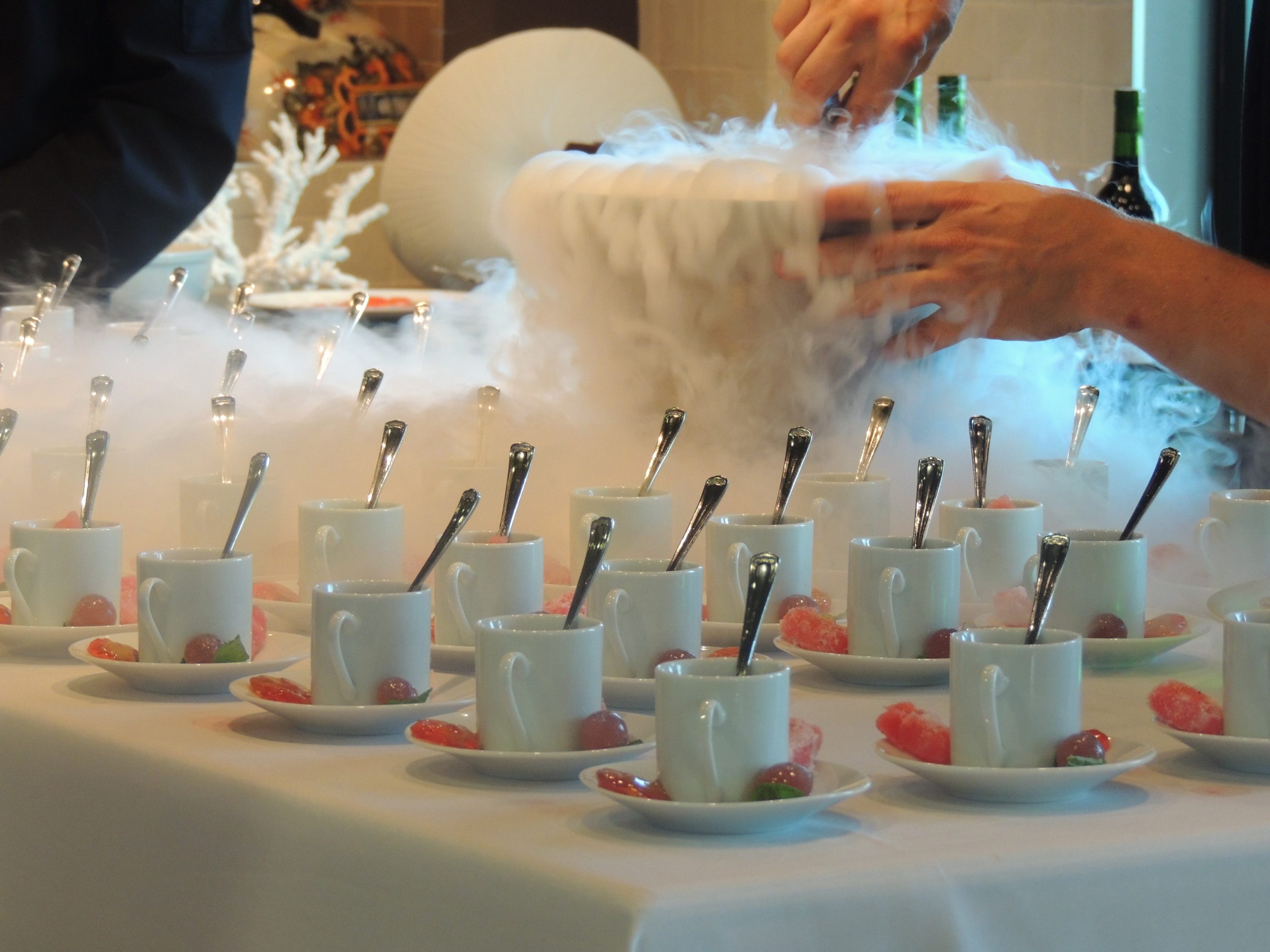 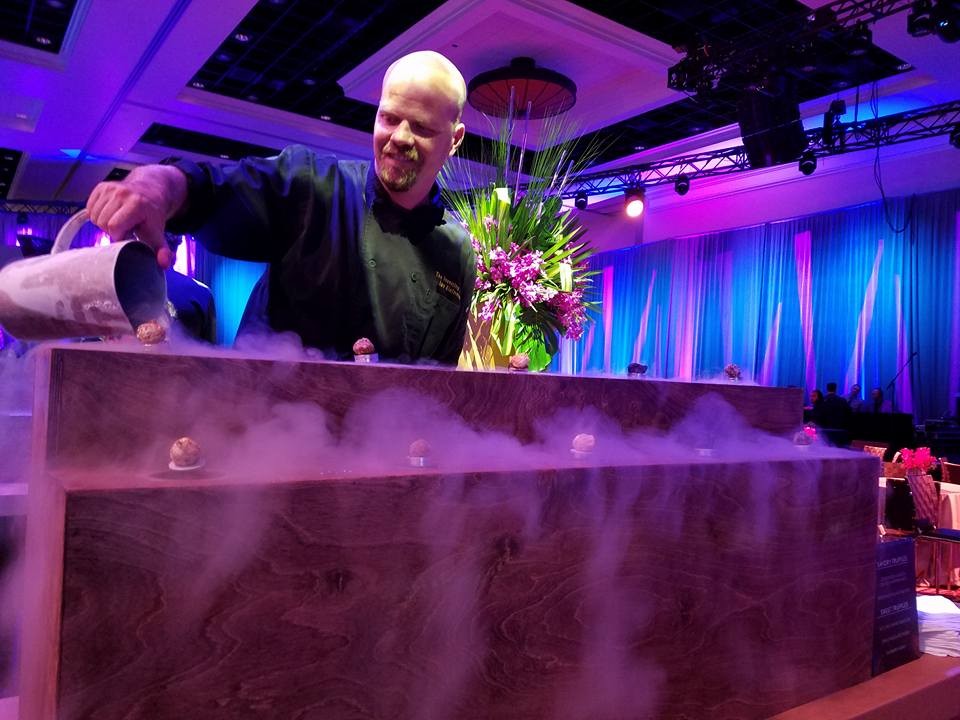 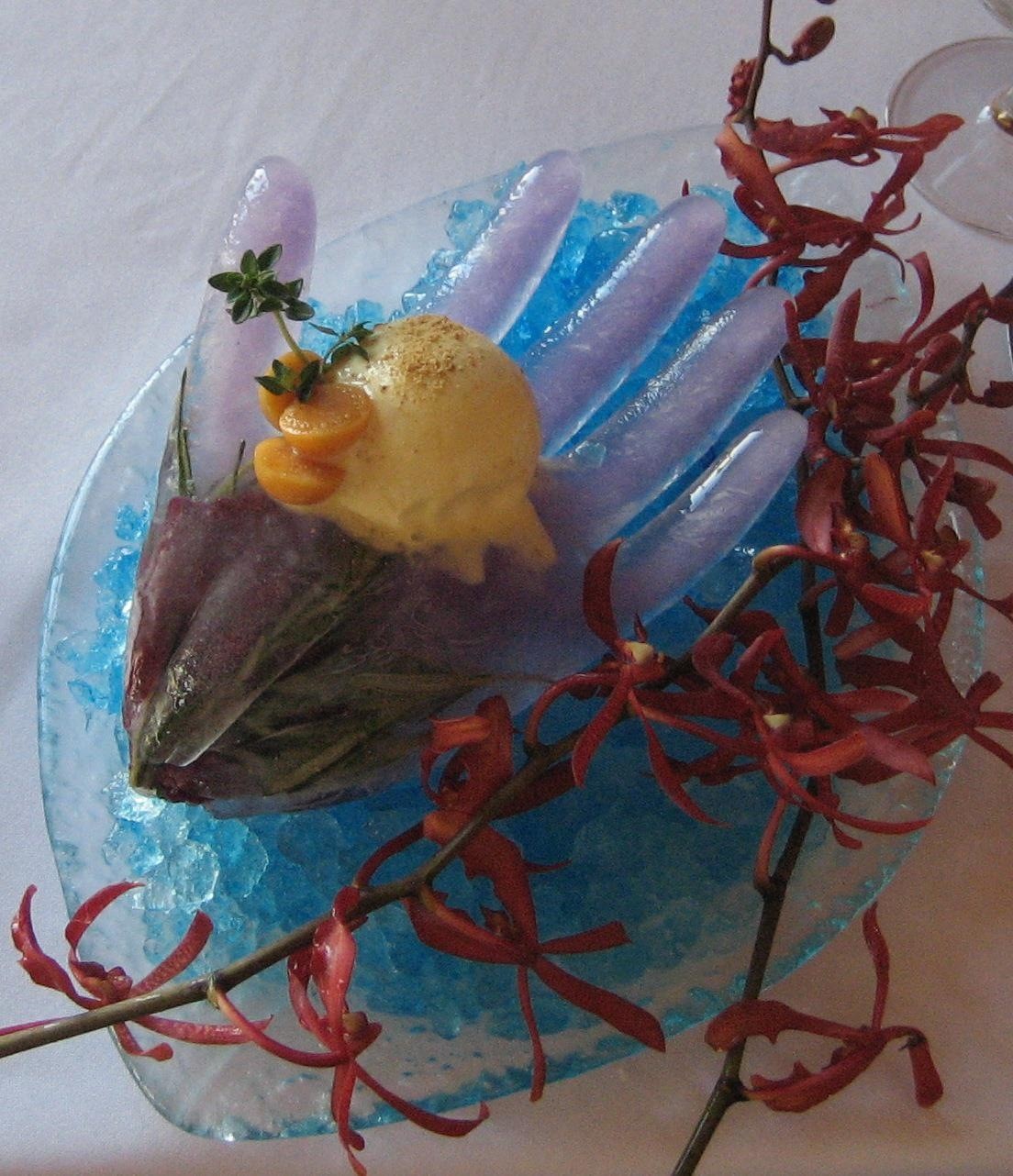 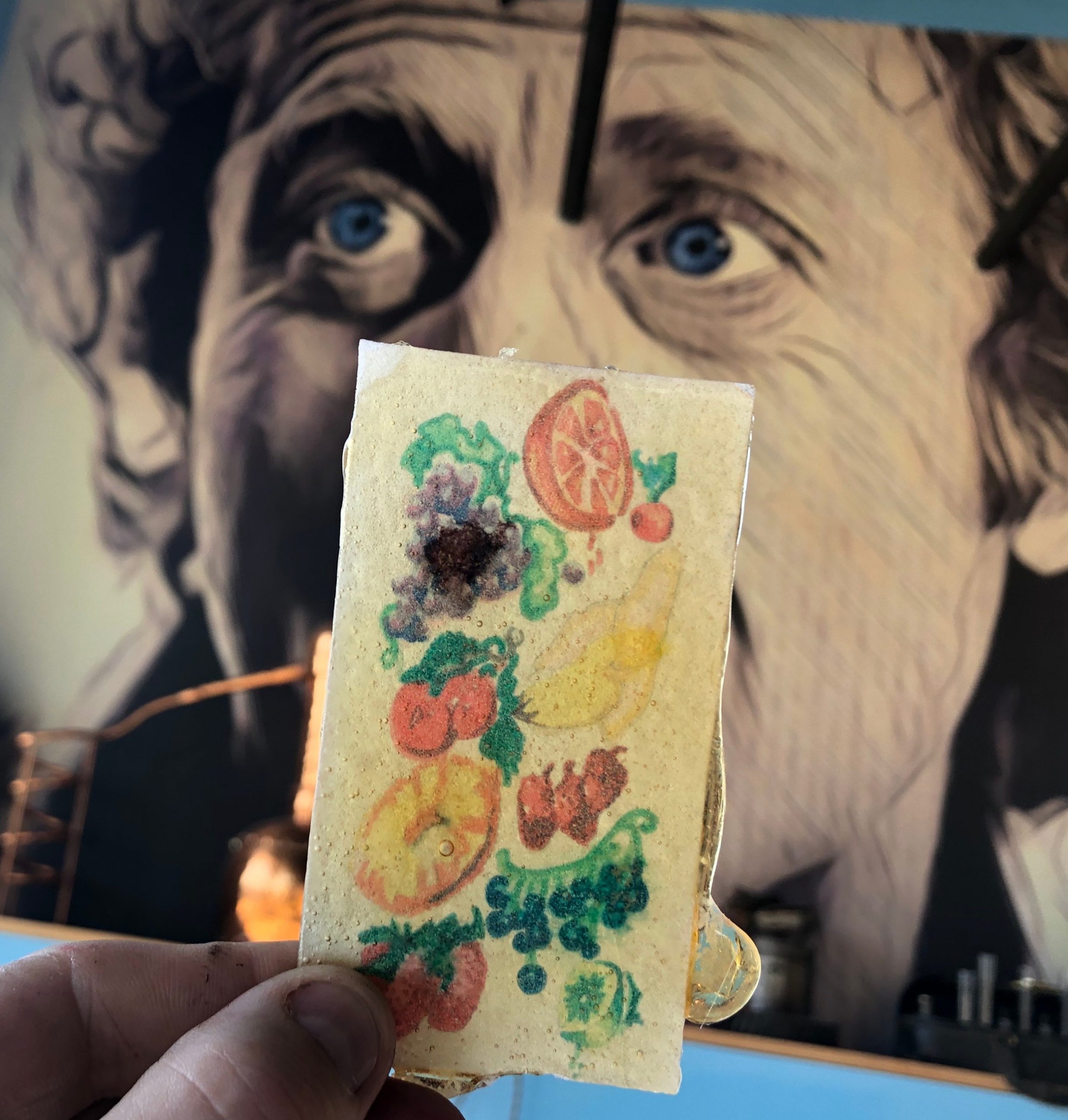 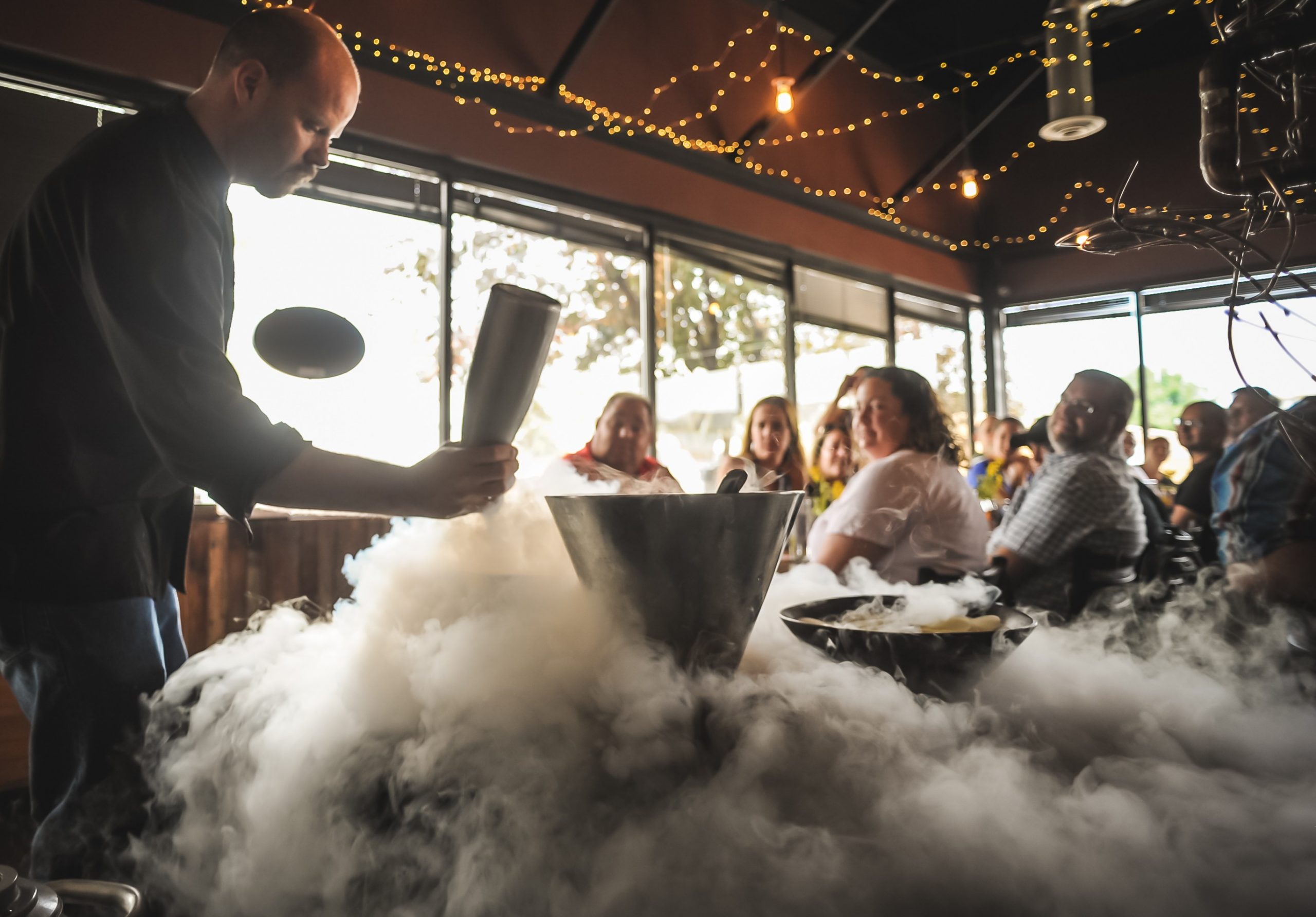 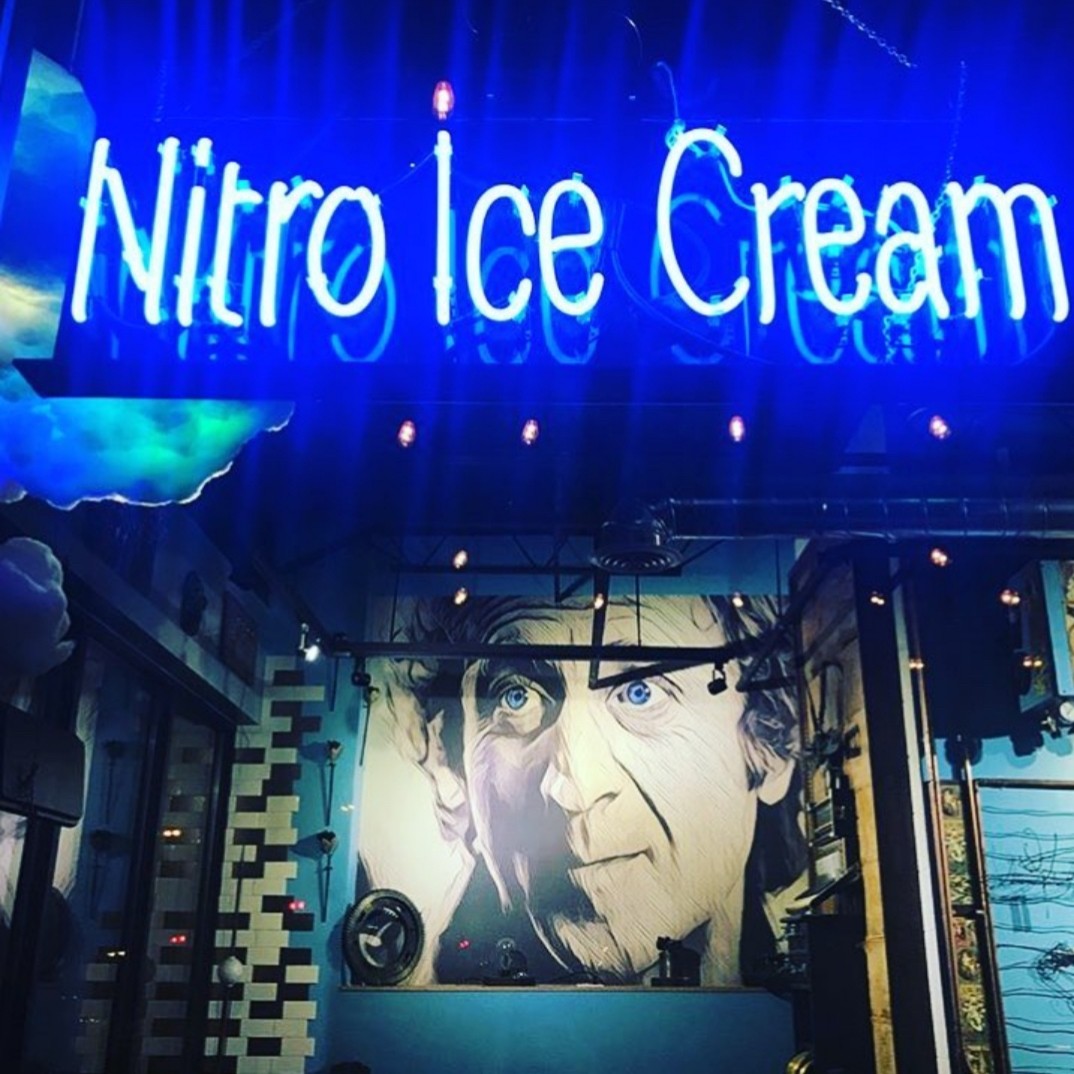