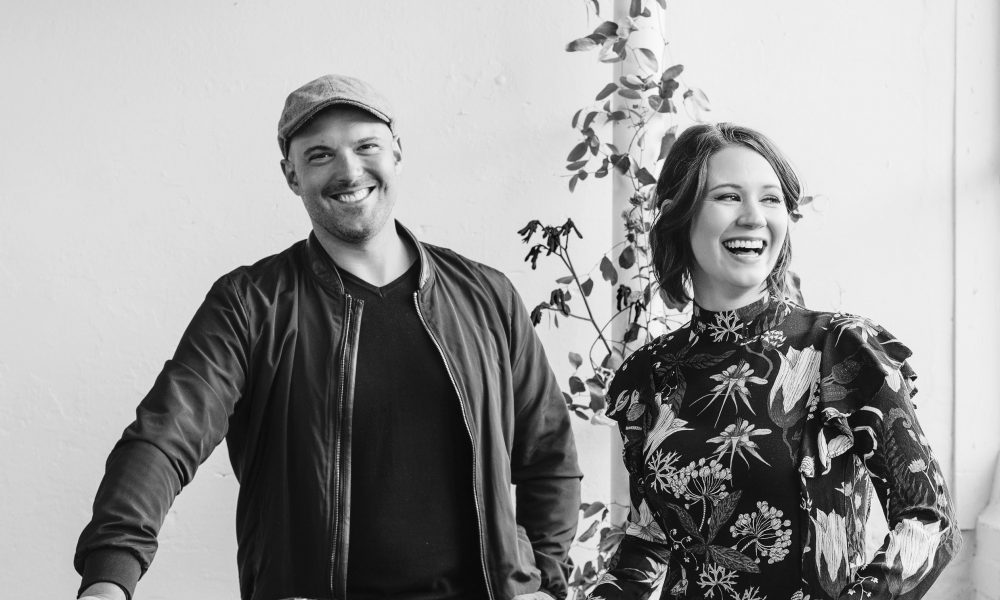 Today we’d like to introduce you to Aubrey Henderson and Tony Liebetrau.

Thanks for sharing your story with us Aubrey and Tony. So, let’s start at the beginning and we can move on from there.
Tony: It started over tacos. Aubrey and I, connected by a mutual musician friend, were on a blind DJ date at a neighborhood spot in the Highlands. We soon discovered that our lives shared almost eerily cohesive backgrounds. We each have DJed a full scope of parties from private events that range from music festivals and high-profile celebrity blow-outs to intimate wooded ceremonies and backyard BBQs.

Aubrey: We both had recently relocated to Colorado from Los Angeles. In LA, we each co-owned successful DJ collectives (RedShoe and Haute Mobile Disco). We’d DJed at many of the same spots in LA, had both cut our teeth on Hip-Hop. We’d built a career out of something we had initially done for free, for the love of the music and parties.

Tony: So we started DJing as a duo at events around Denver and soon after The Get Down was born.

Overall, has it been relatively smooth? If not, what were some of the struggles along the way?
We were both commuting every other weekend back to California to spin, and though neither of us could claim “Native” stickers, we each had plans to build something fresh in our new home state. Luckily, everyone, we have met has been so cool and supportive.

The Get Down – what should we know? What do you guys do best? What sets you apart from the competition?
Our Mission & Philosophy
Aubrey: My mission at a party is to make everyone have a good time and dance. When the music makes people lose control and they aren’t who they are in their normal lives, that’s what I’m aiming for. Philosophy…I guess I’d say I prioritize finding new music. And then finding ways to mix the new with the old. Multi-genre, open format mixing has always been where it’s at for me.

Tony: My philosophy is that if I’m having fun, then the people will be having fun. Since, as DJs, you are playing other people’s music, I feel you should be using all the tools at your disposal to come up with new and creative ways to showcase or present that song in a mix. If you are just playing songs back to back – if you are not blending, beatmatching, sequencing, teasing – then you aren’t doing your job. Aubrey described the mission beautifully – I want people to put their damn phones away, drop all pretenses and as Daft Punk feat Pharell would say, lose themselves to dance.

How we differ from traditional DJ Companies?
Aubrey: We’re not a stable of DJs. We’re not a couple. We’re experienced DJs who’ve put lots of time into the craft and take a more collaborative approach to the way we craft the soundtrack. We’re a boutique company that offers a personal touch – we get to know our clients and their tastes so that we can create something unique for them. What else? We don’t abandon the turntables and just put on a Spotify playlist, we don’t eat dinner at the decks, we don’t sit on stools. We want to connect as much as we can and be a part of the celebration. We both have expanding catalogs of music so that we things don’t get stale. This also allows us to be responsive to the dancefloor. And we have top-end speakers and equipment. We do a wide variety of events so that we stay versatile – and we collaborate with live musicians a lot which helps us approach the work from a variety of angles.

Tony: We have lots of experience in a variety of events. From clubs to multi-day google events, to movie premieres, to weddings – we do it all and I think that creative demand is advantageous. And our technical skill and attention to detail separate us. I’d also say that we focus on all of the phases of the party that sets up the dancing. I spend just as much time curating the soundtrack for cocktail hour and dinner so that by the time we get to dancing, it just flows organically out of what came before. And we’re fun, we’re not just laptop gazing. Aubrey dances around behind the decks, I get into the groove – we want to be connected to the party. That give and take is really important and builds on itself.

How do you approach creating a soundtrack for an event?
Aubrey: I tailor the playlist to the client’s taste. I build off of that and fill in the blanks. I use samples and songs that I think pair well with their musical aesthetic. I think of the party as a story with generally older stuff at the beginning, newer stuff in the middle and then closer songs toward the end.

Tony: Collaboration is key. I use the client’s playlist as inspiration and then build out the rest of the set from there. Because of how we blend songs, people often think we have everything mapped out beforehand but we’re mixing live and allowing the party to influence what we play next.

What do you love about DJing in Colorado as opposed to California?

Aubrey: The people. Sometimes in California people are too concerned about what they look like and they’re not willing to let loose. What I’ve found about DJing in Denver, is that people of all ages get down and join in the party.

Tony: It’s been an interesting transition. Good music is good music wherever you go, but as Aubrey says, the way it affects people is often different. I like the appreciation we receive from people after we’ve finished a set here in Colorado. People in LA often want to appear to have seen it all and heard it all so they’re more guarded.

What advice would you give someone looking to hire a DJ?
Aubrey: Get clear about the type of party you want to have. Music is often the last thing people think of when creating an event, but the music is so integral to the vibe of your party. It’s easy to get lost in the details like what paper and what fork but you forget that at the end of the day, it’s a party! That’s what most people want, as many people as dancing as possible. So choose the DJ that you’re confident will get you there.

Tony: Hire us! No (but yes), I would make sure you’re comparing apples to apples. Are they playing on good equipment? How much experience do they have? If the DJ doesn’t get creative, if they’re just playing songs and won’t give you as big of a dance party then you’re not really comparing the same service. If you’re just price shopping for a DJ, you’re missing the point a bit. People remember the dancing and the party way more than they’ll remember the decor. If you invest in the celebration with a DJ who elevates the music, you won’t regret it.

What future prospects are you most excited by?
Aubrey: Building a larger community using music out here. I think we both want to help other people and expand on what we do. I’d love to have a venue someday. Oh- and I want to DJ parties for Crocs! I not so secretly want them to sponsor me.

Tony: I’ve wanted to open a DJ school for several years now. And I’m really excited to start DJing at some Colorado festivals. Mostly though, I’m just excited to do more events at The Get Down. I think Aubrey and I offer something unique and so far the response has been great. 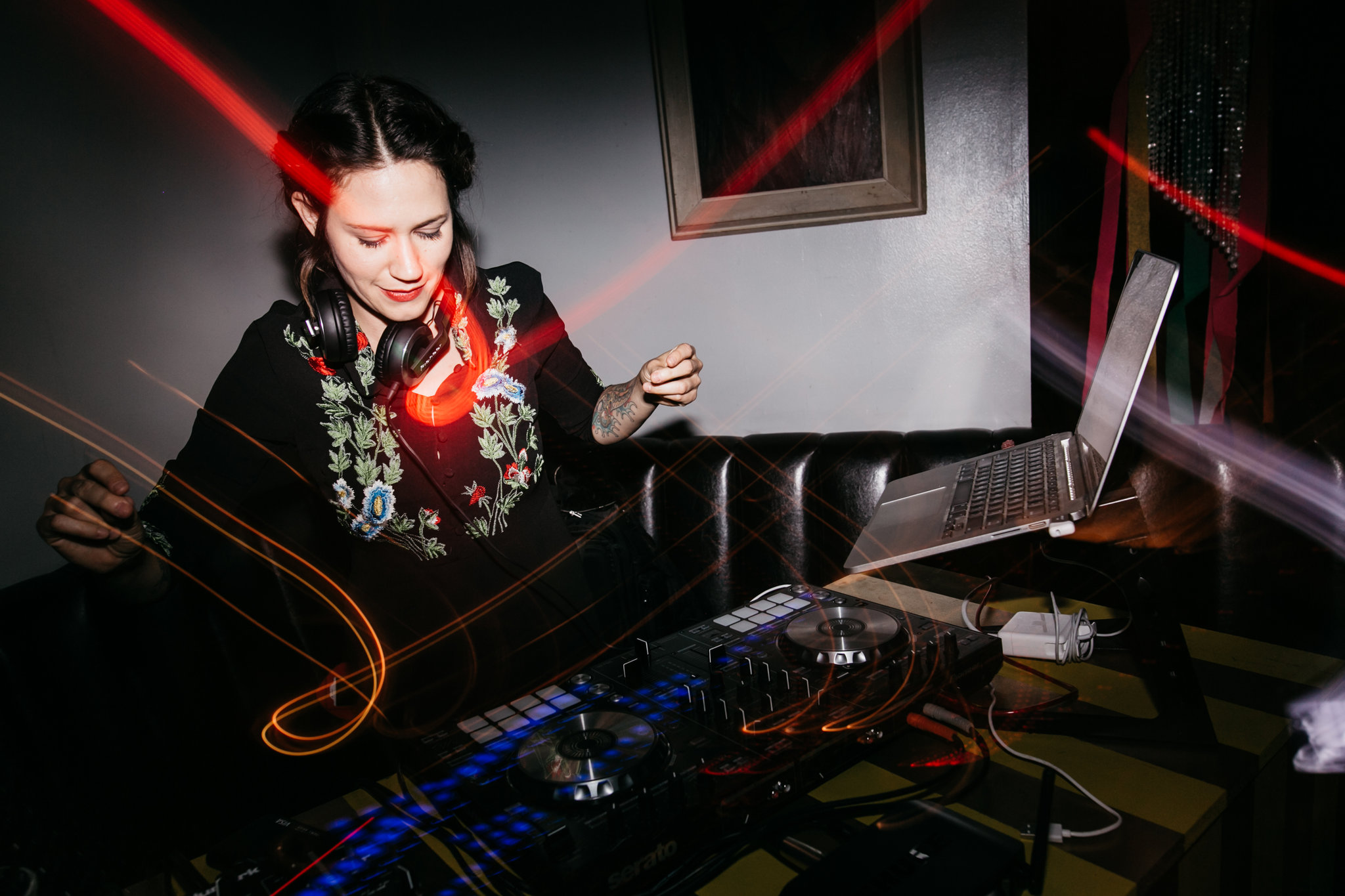 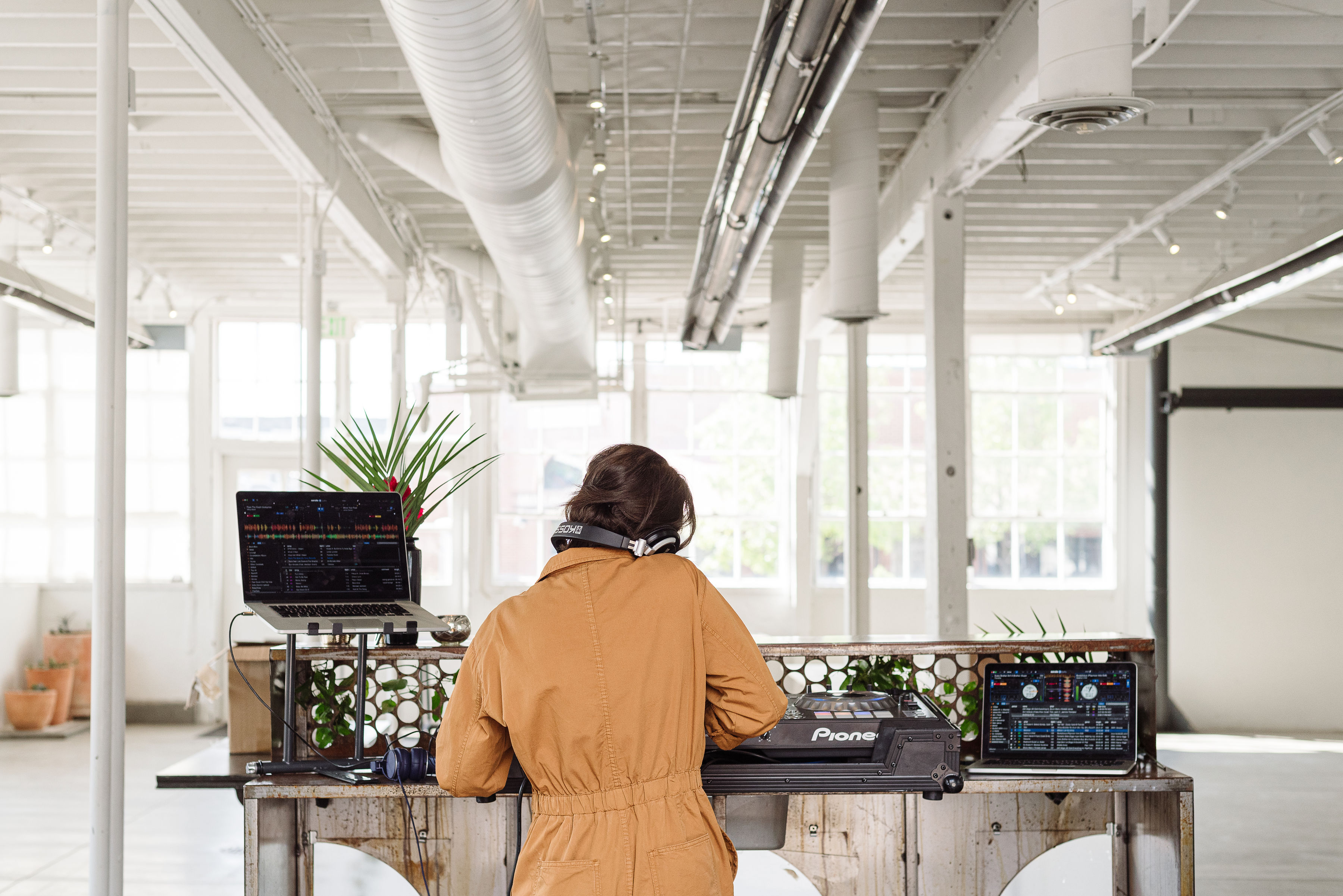 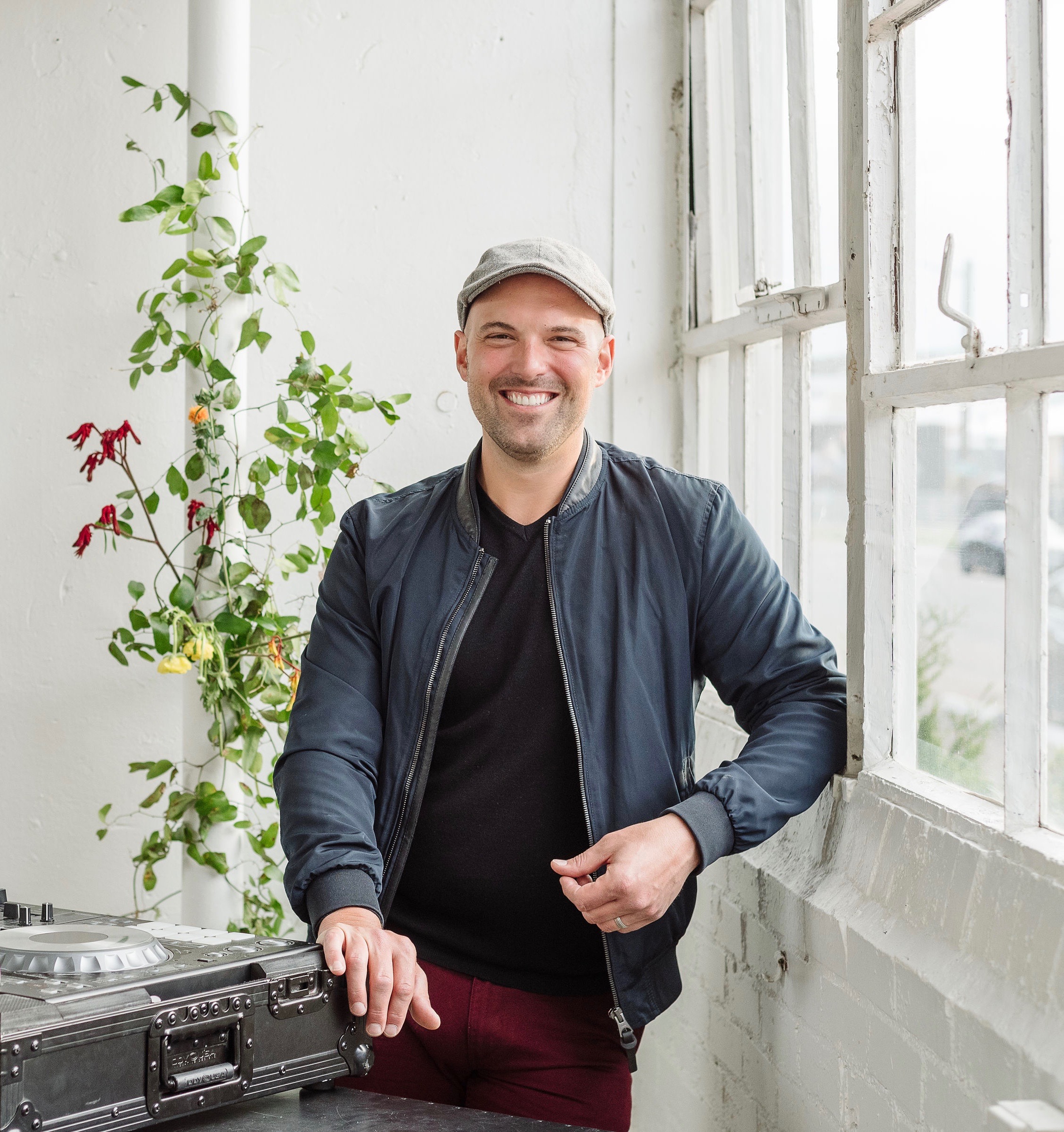 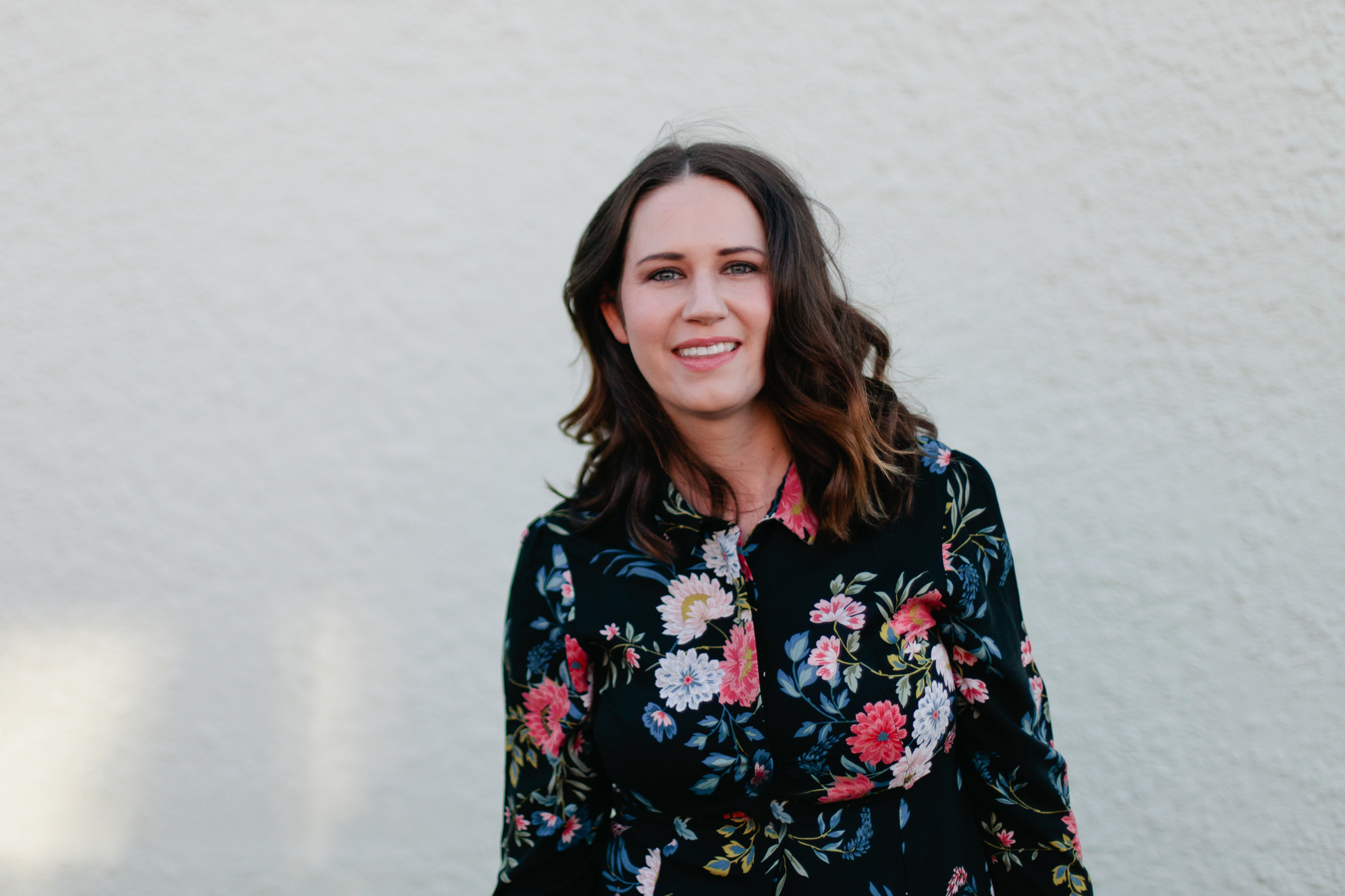 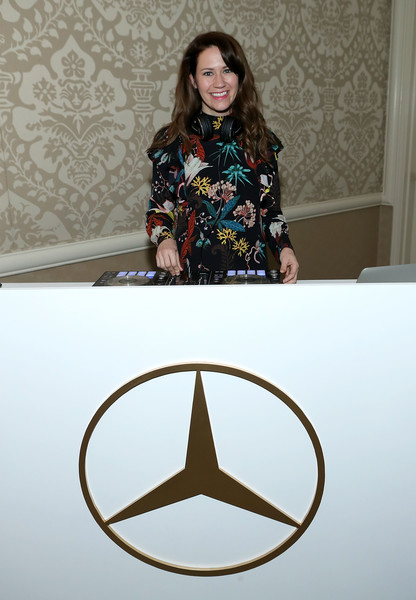 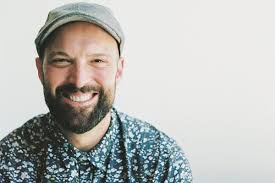