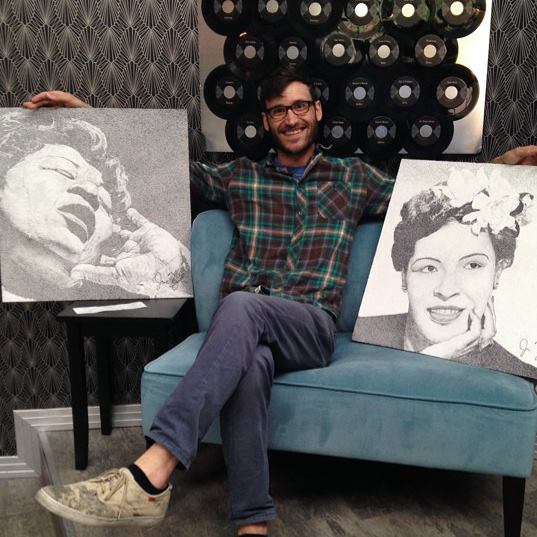 Today we’d like to introduce you to Joe Ziegler.

Joe, let’s start with your story. We’d love to hear how you got started and how the journey has been so far.
I started drawing on canvas shoes in 2011 using a pointillistic style and fine-point archival markers. That wasn’t really the beginning of my work as an artist, but it was where I started to see the viability of my art as a business. I had finished a pair of shoes juxtaposing natural and man-made power, structures, and beauty; so, I posted pictures online and had several folks asking where I got the shoes and if I could make pairs for them.

Later that year, my cardiologist discovered an aneurysm forming at my aortic root and suggested surgery STAT. I was under the knife three weeks later and received an aortic valve transplant while they were at it. After six weeks of recovery, I eagerly jumped back out on the road wearing the custom shoes, determined to live fully and share my art more than ever. In the next two years, I wrote/recorded/released three albums, played over 250 shows and traveled more than 20,000 miles. Between tours, I’d fill a shoe order for a friend or two until I eventually slowed down on touring to create more visual art. Virtually everything I’ve done as an artist has been DIY, ramshackle, less-than marketable. (Hot Marketing Tip: Call it “bespoke” and mark it up 30%.) Every time I tried to monetize the art on a larger scale, I’d recoil, feeling like a fraud for selling it at all. To this day, I’m quick to talk about my work but fight for the honor of the work beyond its fiscal value. Most pairs of shoes take 20-40 hours of dotting (and the market I’d found capped at about $500), so I would have gone crazy or quit if I had focused on efficiency in relation to revenue.

I’ve grown to realize that the most valuable element of my work is the time spent creating. The process of creation one dot at a time is calming, restorative, and perpetual. Like Buddhist monks sweeping away months of work, I no longer fear the time I’ve spent as a waste. Rather, the time spent is one of the only distinguishing factors of my work. In 2015, I tested a theory that I could scale the same stippled marker style up by painting with larger dots. It worked, and now I am confident with working in any size. This has opened me up to working murals, with cities for commissioned work, and so on. I try to encourage my custom buyers to dream big, go nuts because I can work anything into a design dot by dot. Still, I do a lot of more classic portraiture, which gives me time to spend with –and learn about– my subjects, whether it’s someone’s family or one of the labor-of-love series, I’ll work on for the rest of my career.

Calling back to my rock music roots, I debuted Black Faces of Rock in 2017 as a group of 12 portraits (now 21), which is a collection of large portraits depicting artists who have shaped rock and roll. I started because I saw how white-washed rock history had become: The Rolling Stones were bigger than Howlin’ Wolf, Elvis Presley is a household name though he largely emulated Big Mama Thornton and others. The show is paired with a list of almost 200 names of black contributors I’ve yet to paint, which means I will continue to learn about the true impact of these artists forever. Working on this series, and discussing the cultural impact of people of color, has driven a greater understanding on the matter than I ever anticipated. It’s my favorite result.

Queer Folk of Rock debuts next week in San Francisco for Pride Week 2019, and Women of Rock will be the next project I’ll start for the same reason, to pay proper mind to the under-recognized progenitors of rock. Many of these portraits straddle the series lines, hopefully increasing awareness regarding the intersectionality of these creative icons.

Currently, I’m painting more than ever, still writing music and traveling a bit for it. I don’t know if I’m a great candidate for a “success story”, though I’ve gutted it out this long and plan on doing it for a long time. If I were to measure my achievement by income, or by how many times I tried to partner with a major company and failed, I’d feel pretty worthless. If measured in regard to how many heads have turned, thoughts provoked, friends won, and peace found, I could say I’m doing alright.

Great, so let’s dig a little deeper into the story – has it been an easy path overall and if not, what were the challenges you’ve had to overcome?
The road is only as smooth as my privilege has paved it…

I’ve been more fortunate than most to even attempt a career in the arts. I’ve learned to live in poverty, need little, and spend less. Living as an artist is a lifestyle few are comfortable with over time, which could make me feel like a cockroach outlasting the apocalypse, but a life with less suits me.

Having time to address the administrative elements of running an art business is a challenge. If I’m applying for opportunities, connecting with social media followers, or even updating my website, I’m taking time away from producing enough art.

Marketing has been a grand challenge, especially since it rubs against my anarchistic grain. I don’t want to sell anyone on anything, no matter how much I want folks to support my art. I want to show the world what I do and get deep in conversation to further my understanding. Marketing my art like any other product has/will fail.

Please tell us about Joe Ziegler Art.
I specialize in custom impressionistic art, usually with the pointillistic style I’ve come to employ. There are many artists who work with pointillism, though most are keen enough to leave it after a while. Most artists see it as a time-suck or have commented on it as a “dead style” because it rose to popularity for such a brief time in the late 1800s. Few may understand my connection to the style as a practice, but I look at even the inefficiency of the work as a positive. Most art students took a class that though them dot work, then moved on to less painstaking methods.

I have learned great patience through my practice and feel that it sets me apart if nothing else does. Otherwise, I believe that we’re all creative and that the construct of competition which sets one in front of the other does nothing to impel art forward. Maybe that’s what sets me apart… Most folks are in business to compete for work, I’m in business to connect with everyone.

Do you look back particularly fondly on any memories from childhood?
My memory is a bit hard to trust. I remember running everywhere, sun in my face, spending time with my younger brother feeling alive without any sense of dread or doubt of my worth. 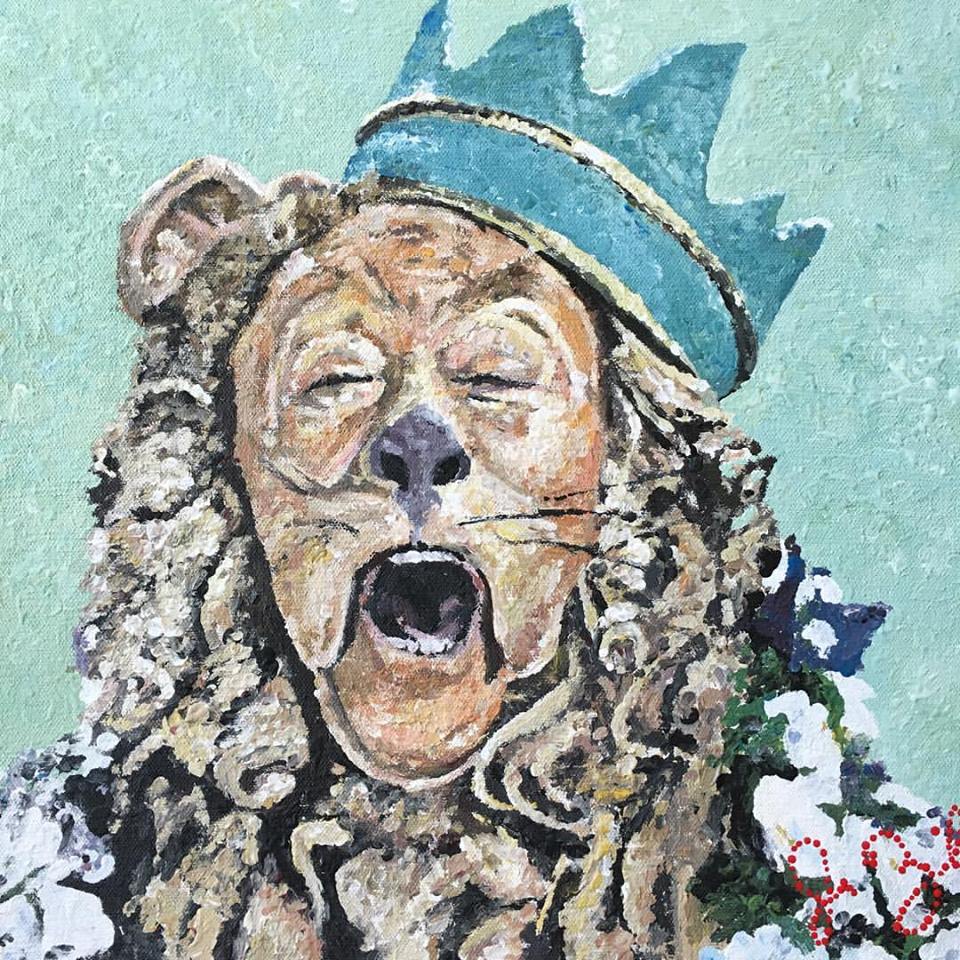 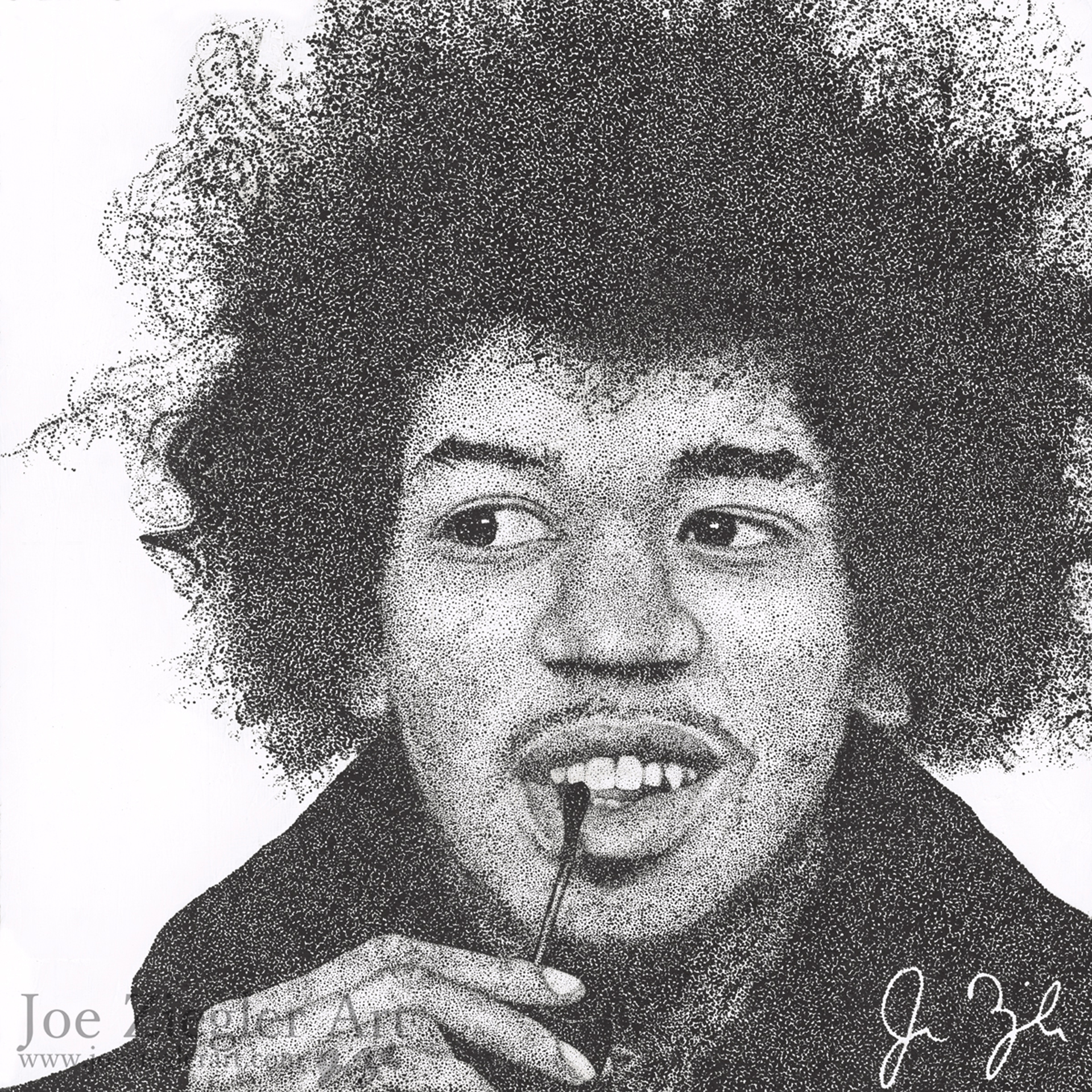 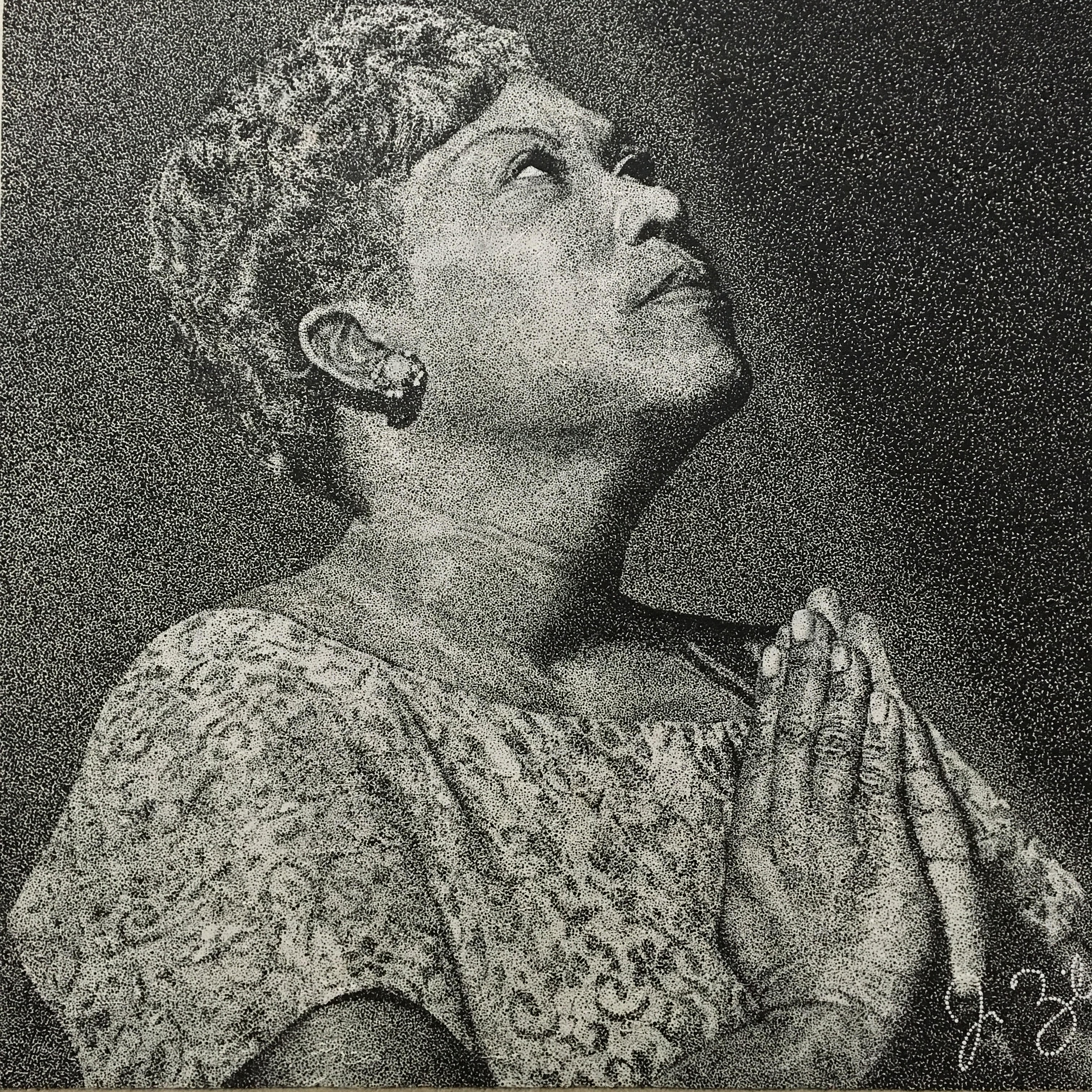 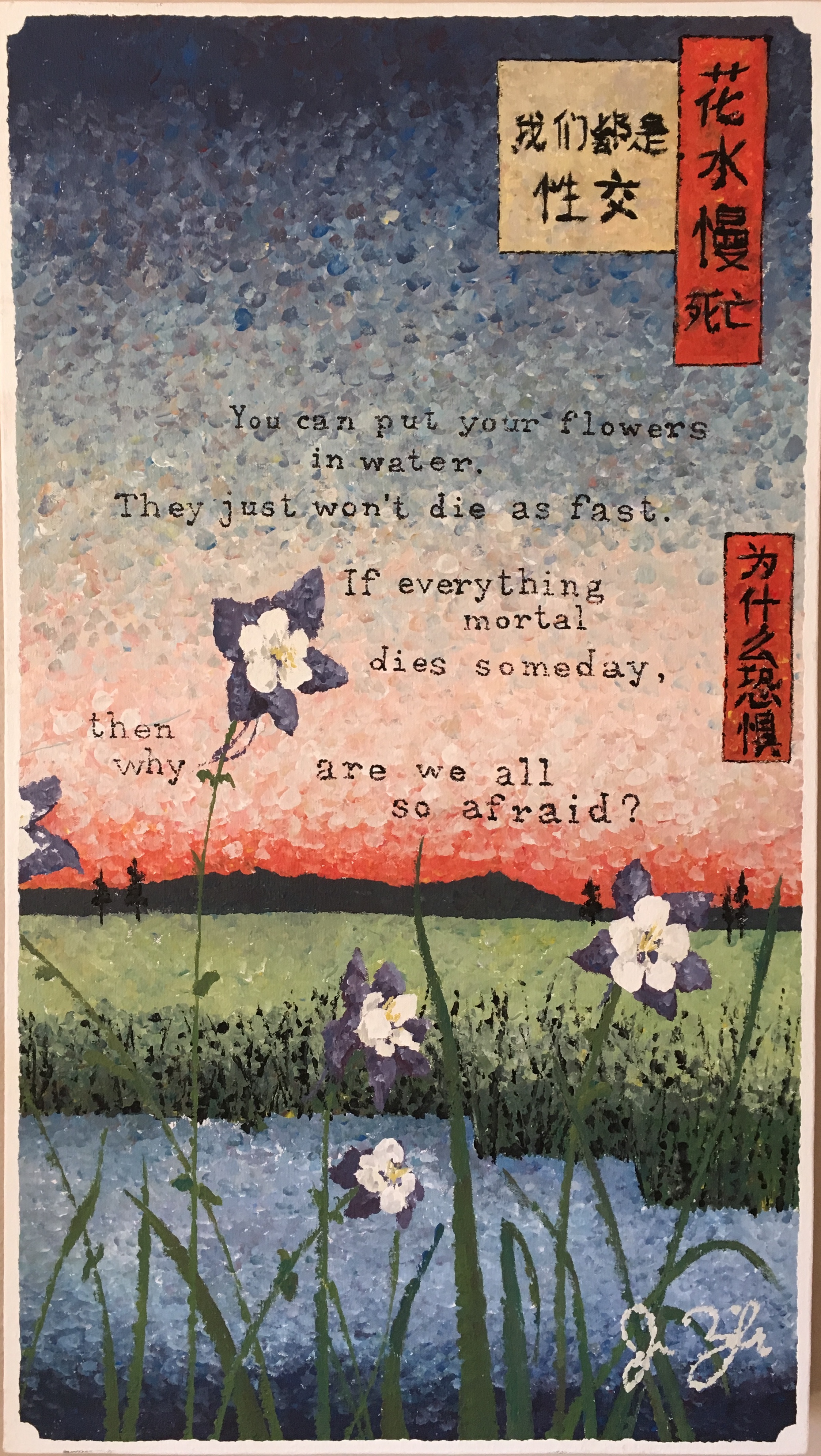