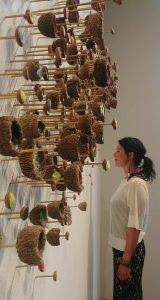 Today we’d like to introduce you to Julie Maren.

So, before we jump into specific questions, why don’t you give us some details about you and your story.
I received my BFA in painting in 1993 from CU Boulder. After college, I learned how to carve stone- first through a class at the Art Students League of Denver and then at MARBLE/Marble. I had a job during this time but painted whenever I could. I was then laid off at the same time that I was in a couple of shows, in which almost all of my paintings sold, so I continued to paint, sculpt, and have shows and not get another job.

I continued for years working as a sculptor and painter, also illustrating a couple of children’s books, showing my work at galleries, attending stone carving symposiums in New Zealand and India and carved in non-traditional architectural bas-relief, and created an art-line of socks for Smartwool.

Everything changed in 2008. The financial crisis shut down all of my galleries, I got divorced, traveled and moved to Brooklyn where I soaked in the museums and graffiti equally. However, missing nature and a job opportunity as a textile designer brought me back to Boulder a year later. The art-line for Smartwool had sold well the year before and I ended up freelancing for them for nine years, learning valuable skills and honing my eye for color and pattern.

The steady income allowed me to rent studios and experiment with new materials- and to not worry about selling my work. I kept creating these enormous paintings composed of multiple panels, which took up so much space but helped me realize that what I was most interested in were the patterns of dots that appeared throughout. I desired to take my paintings out of the confines of squares and rectangles canvases and needed space and time to explore this.

So, I spent a month at Weir Farm in Wilton, Connecticut, through the National Park Artist-in-Residency program, where I had an amazing studio and a little historic cottage to live in- and because it was off-season for the park, which is known for its gardens- no one was around. I had lots of uninterrupted time and took long walks every day in the woods, where I kept looking at the millions of tiny acorn tops covering the ground, trying to figure out what to do with them.

Eventually, I started filling them with paint and posing them on moss; and the multitude of colorful acorn tops became “The Wandering Dots,” a photo series about displacement. However, because I am not a very good photographer and I was taking the dots on vacation with me, spending hours arranging them on top of volcanoes and the beach, my patient partner suggested that I just hang them on the wall- and it all clicked visually. It took a few months and many trips to the hardware store before I figured out how to mount the acorn tops. My sister who was living in Texas at the time sent me a box of enormous acorn tops, which I never knew existed- but which made the installations that I was creating so much more interesting.

Meanwhile, it is 2016 and the presidential election just happened and I am mad as hell. I co-found “The Women’s Art League” with Joy Alice Eisenhauer and collaborate (with the participation of 200+ women) creating a feminist ceramic art installation,“Vagina China,” over the next three years. This project received international media attention and multiple grants- and the attention of Judy Chicago, who invited us to participate in a short film at the Brooklyn Museum tracing the legacy of feminist work using the plate form, from Victorian-era Vanessa Bell’s proto-feminist “The Famous Women Dinner Service” to Chicago’s “The Dinner Party” (1979) to Vagina China. The project closed with a show at Seidel City in December 2019.

All along, I was working with finding forms for the paint-filled acorn tops, which basically became their own medium. I titled them “Biophilia,” and they are both wall-sculptures and 3-dimensional paintings- they are the dots that left my paintings. I create expansive, multi-dimensional arrangements of color and pattern which play with microscopic and macroscopic perspectives. The installations change with light and shadow. I also love how the once displaced wandering dots have now come together to form these beautiful arrangements.

Biophilia debuted at Walker Fine Art in Denver in 2018 and I am currently represented by Wally Workman in Austin, Texas, 212 Gallery in Aspen, and Kenise Barnes Fine Art, where I just was in a two-person show at her Connecticut Gallery and my work is currently on display (until September 19th) in a group show at her Larchmont, NY location. I have an upcoming show at Wally Workman in December and some commissions in the works and am continuing to experiment and play with the Biophilia, and having so much fun with it.

We’re always bombarded by how great it is to pursue your passion, etc – but we’ve spoken with enough people to know that it’s not always easy. Overall, would you say things have been easy for you?
It has never been smooth sailing, as there has been constant rejection (applying for grants, shows, galleries, etc.) and making money consistently has been challenging throughout- but to be expected with this career choice. Opportunity wise, I feel so grateful for how many have opened up- like a major publisher calling me out of the blue to illustrate a children’s book, “Celia Cruz, Queen of Salsa” and traveling abroad to carve stone, and Judy Chicago inviting us to be in a film with her.

However, in 2008, with the financial and life crisis, things changed and making a living as a fine artist wasn’t an option right then. After my time in Brooklyn, I needed a job, which took a period of adjustment, but I was so lucky to work for a company that trained me on the job and was creative. I had to learn a lot of different computer programs, which was challenging- but so good and empowering- and I developed a whole skill base that I have integrated into my fine art practice today. COVID has had an impact with projects and commissions getting canceled and shows that I can’t go to. The silver-lining has been added time in the studio to work out new ideas.

One big obstacle that came up for me with “The Women’s Art League” was my need to speak publicly. I get really, really nervous- but I just had to do it. We held many workshops, gave talks at colleges, were interviewed for press, and then in a short film at the Brooklyn Museum, with Judy Chicago, next to The Dinner Party, being interviewed by Yale Center for British Art. The experience inspired me to enroll in a workshop (“Speaker’s Playground”) for a year to conquer my fear! I am still nervous, but definitely more comfortable now.

Sometimes the creative process is almost painful for me- when I don’t like anything that I make and I feel stuck. I do know that this is just part of the process at this point, so I just keep showing up at my studio and playing- which I also know is the way through it for me.

Please tell us more about your art.
I am an artist who works in multiple media including painting, sculpture, stone carving, ceramic, and wall-sculpture installations. As a painter, my work traditionally has lots of layers and collage, with loose narratives told through imagery of natural world. As a stone carver, my specialty is my non-traditional approach to bas-relief caving on architecture and natural stones.

I am very excited about how painting, sculpture and my textile design experience have merged into my Biophilia series. It feels very satisfying to work with color, pattern and shape in a way that feels expansive. I feel like the Biophilia installations are pretty magical when you see them in person. Each piece is like an individual painting, and I like how they appear to float and some of them appear to glow from within, and I find the contrast of natural, artificial and recycled materials exciting. I think the installations are really unique also and engaging to the viewer and they do make a great conversation piece, as so many people have their own connection with acorns, usually from childhood. I use the symbol of the acorn as a reminder of our interconnectedness with nature and to our larger community and world. Just as one seed can grow into a massive oak that can plant a whole forest, the acorn reminds us of our own potential and what/ how/ who we share with the world. While each individual Biophilia is complete on its own, they work more beautifully together.

What were you like growing up?
I was definitely an artsy kid, from the time I could hold a crayon. I was always making something, was super curious, kind of quirky and a little bit of a “creative” trouble maker growing up. In preschool, the teacher used to come around and write put our names on tape on the front of our paintings and I would always quickly paint over it.

I was really into nature and spent a lot of time in it, and made art out of it. I would paint on marble, make turtles out of walnut shells, and cover logs with moss and little plastic animals. My dad worked for the school district and had the summers off, so we would travel around the US and go camping all summer long. I had pet butterflies and crickets, wanted a raccoon so badly and longed for a bear to scratch me, so I would have a cool scar.

I am not proud of this, but in elementary school, I got in trouble for making a book that featured unflattering drawings of the teachers. It got confiscated and instead of getting suspended, my accomplice and I became the official classroom decorators for holidays for the rest of the year, “since we were such good artists.” Those genius teachers and my mom’s insistence that I make all gifts probably set me on the path of becoming an artist. 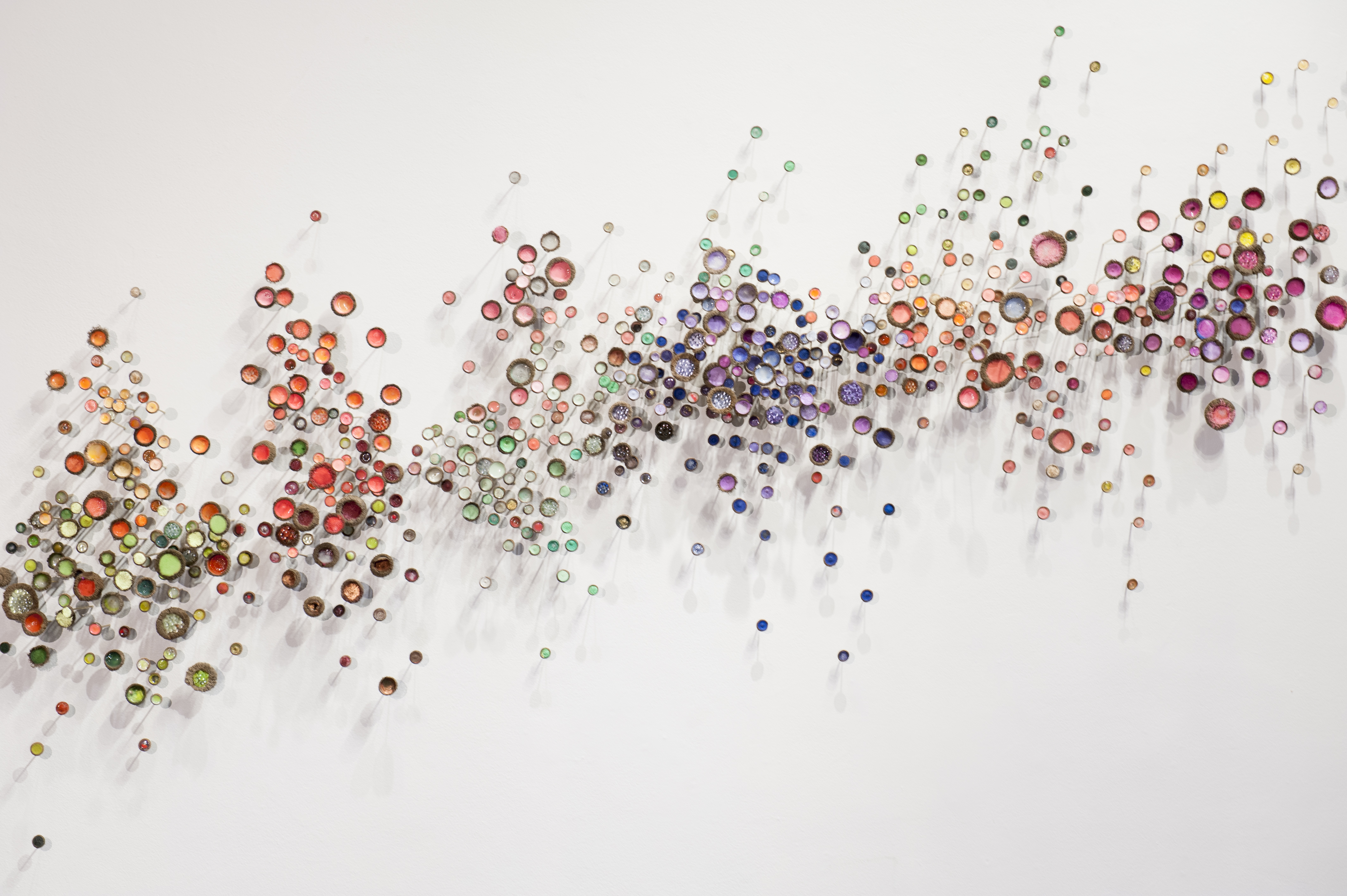 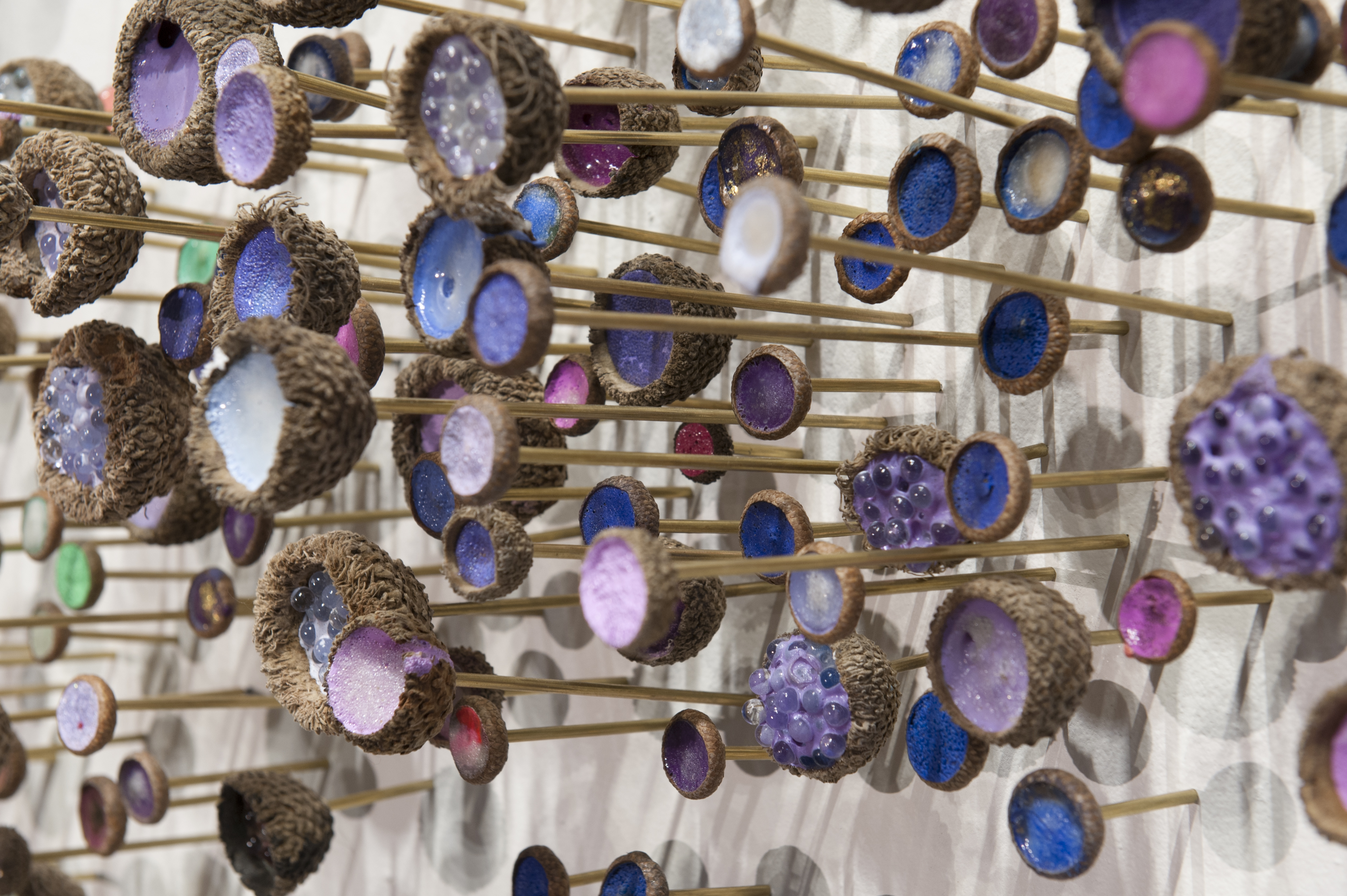 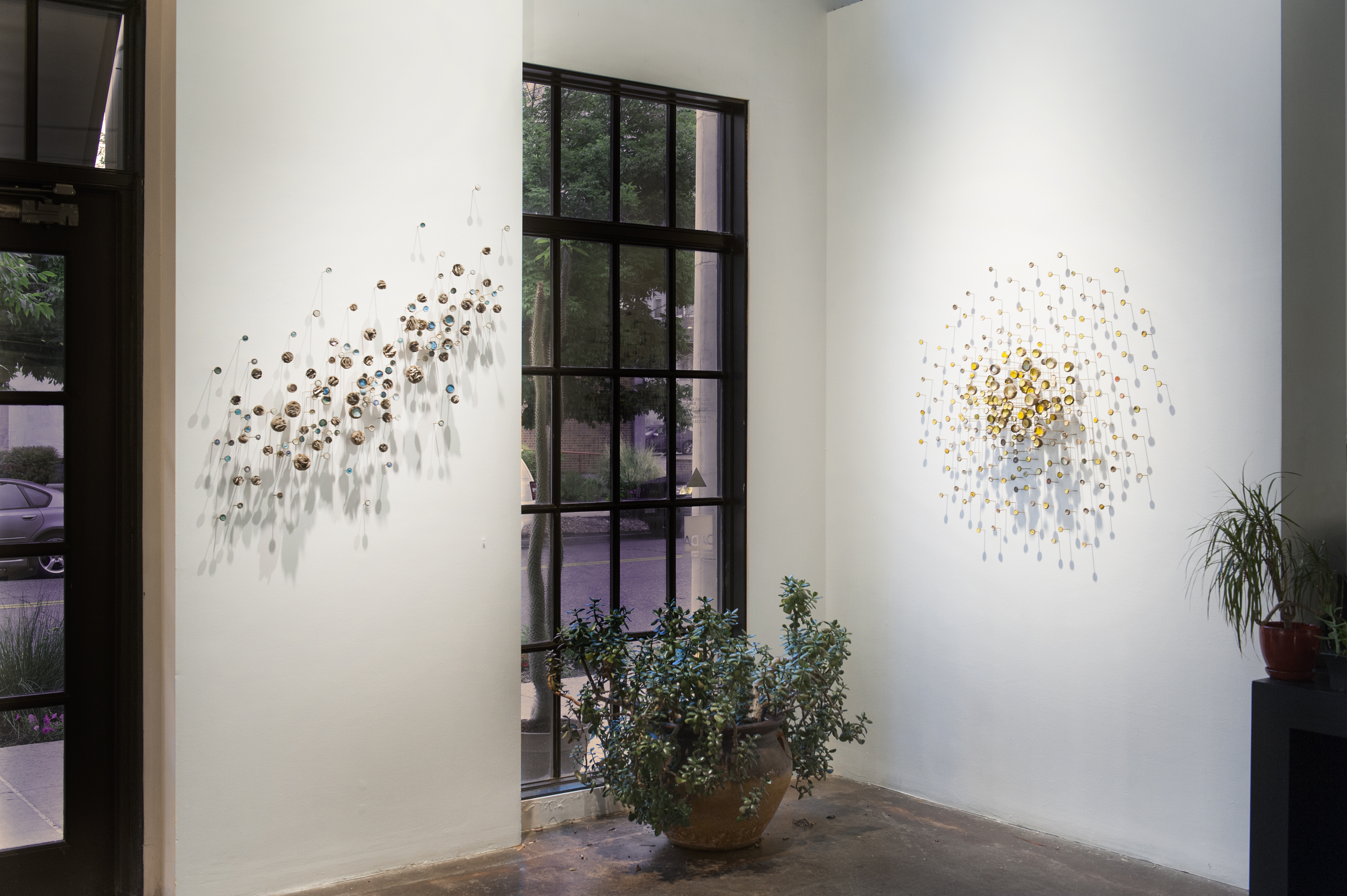 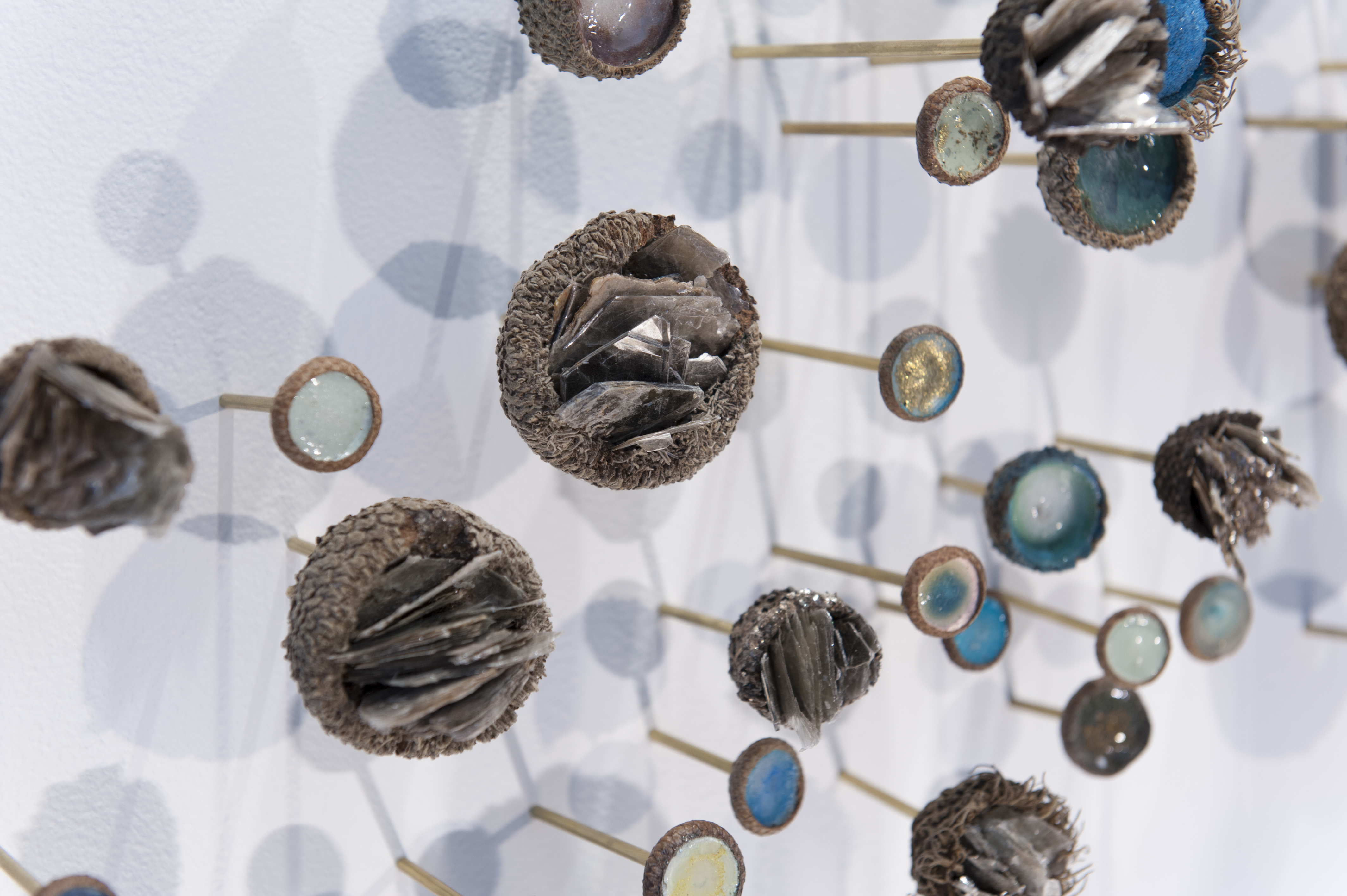 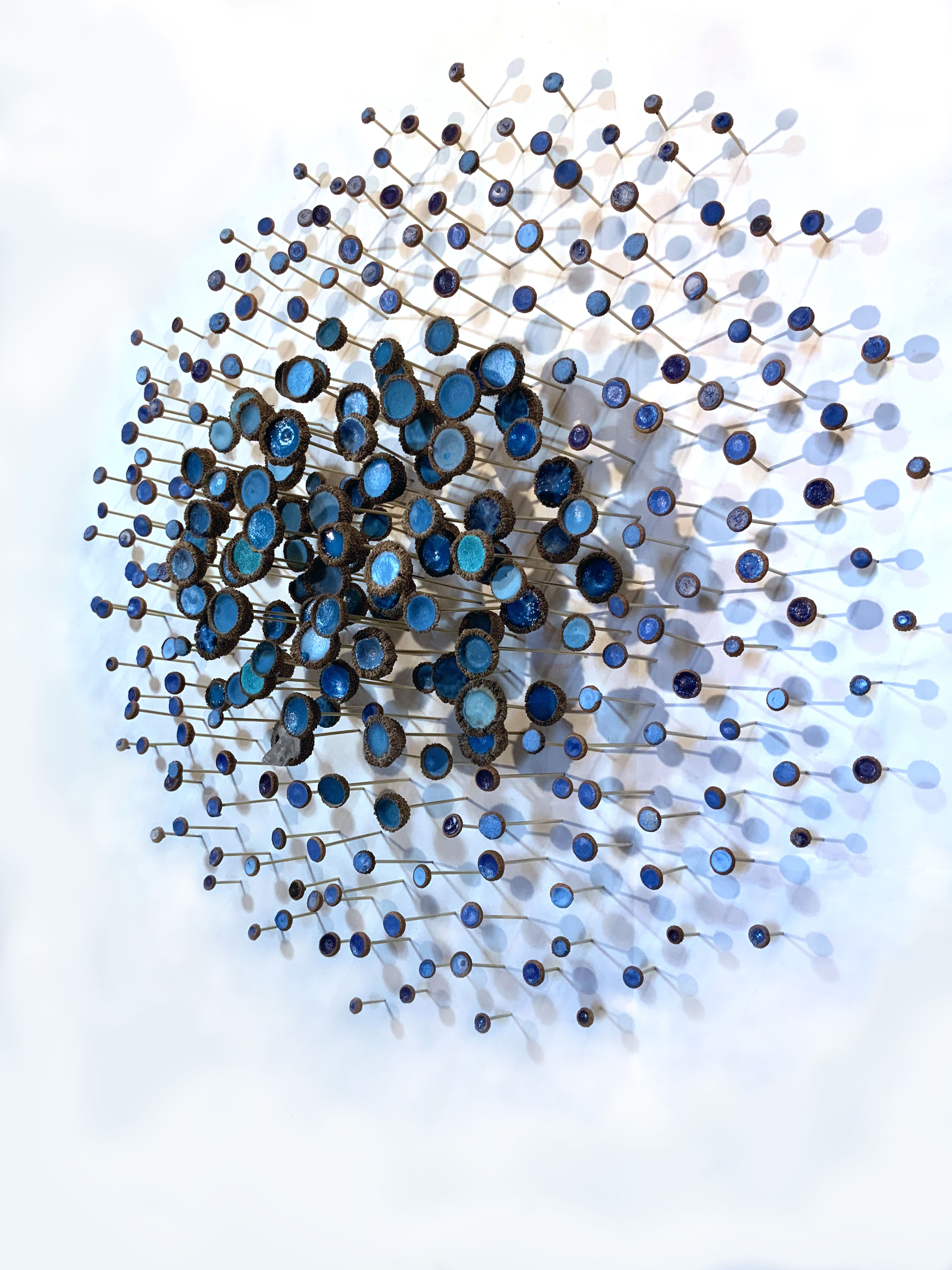 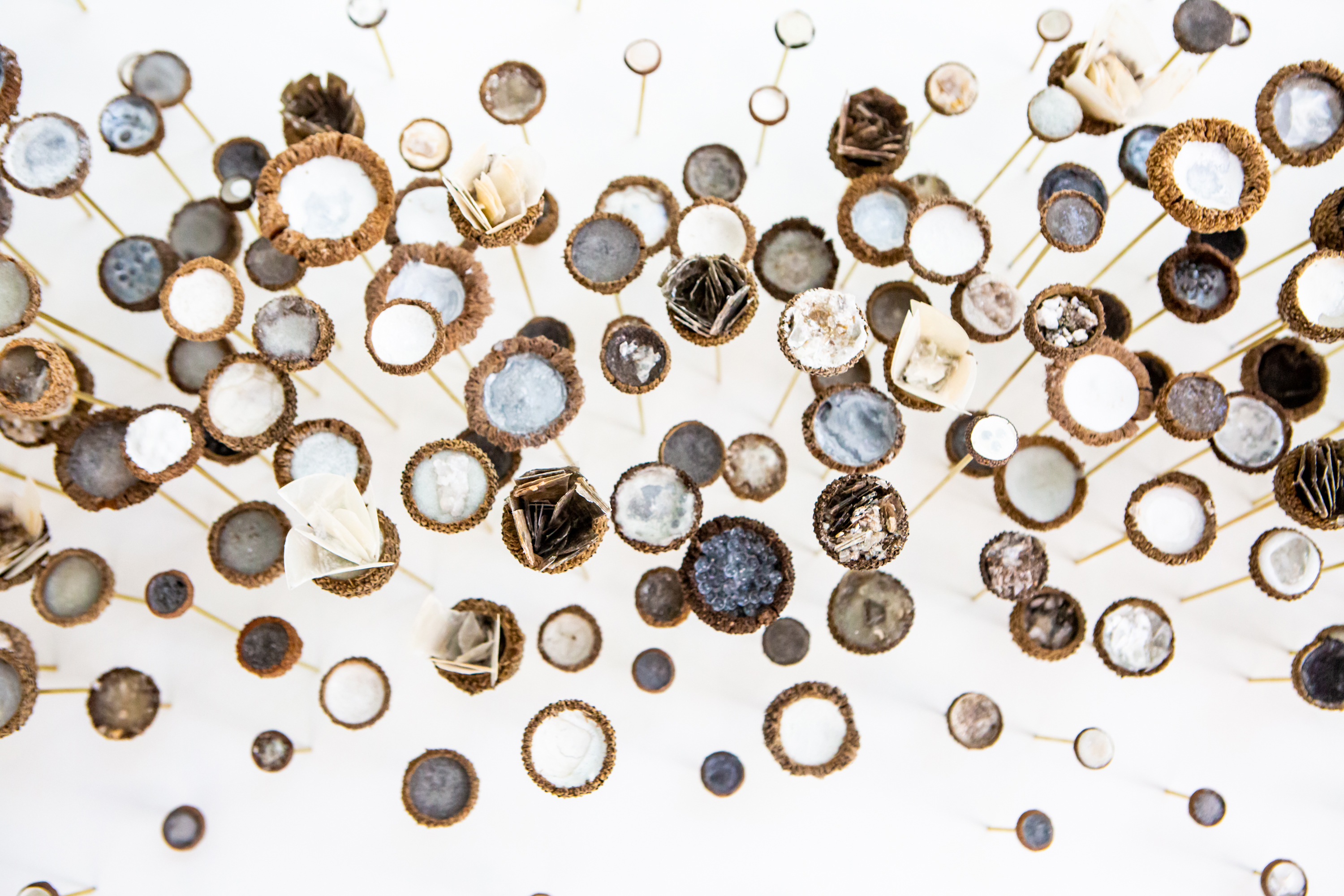 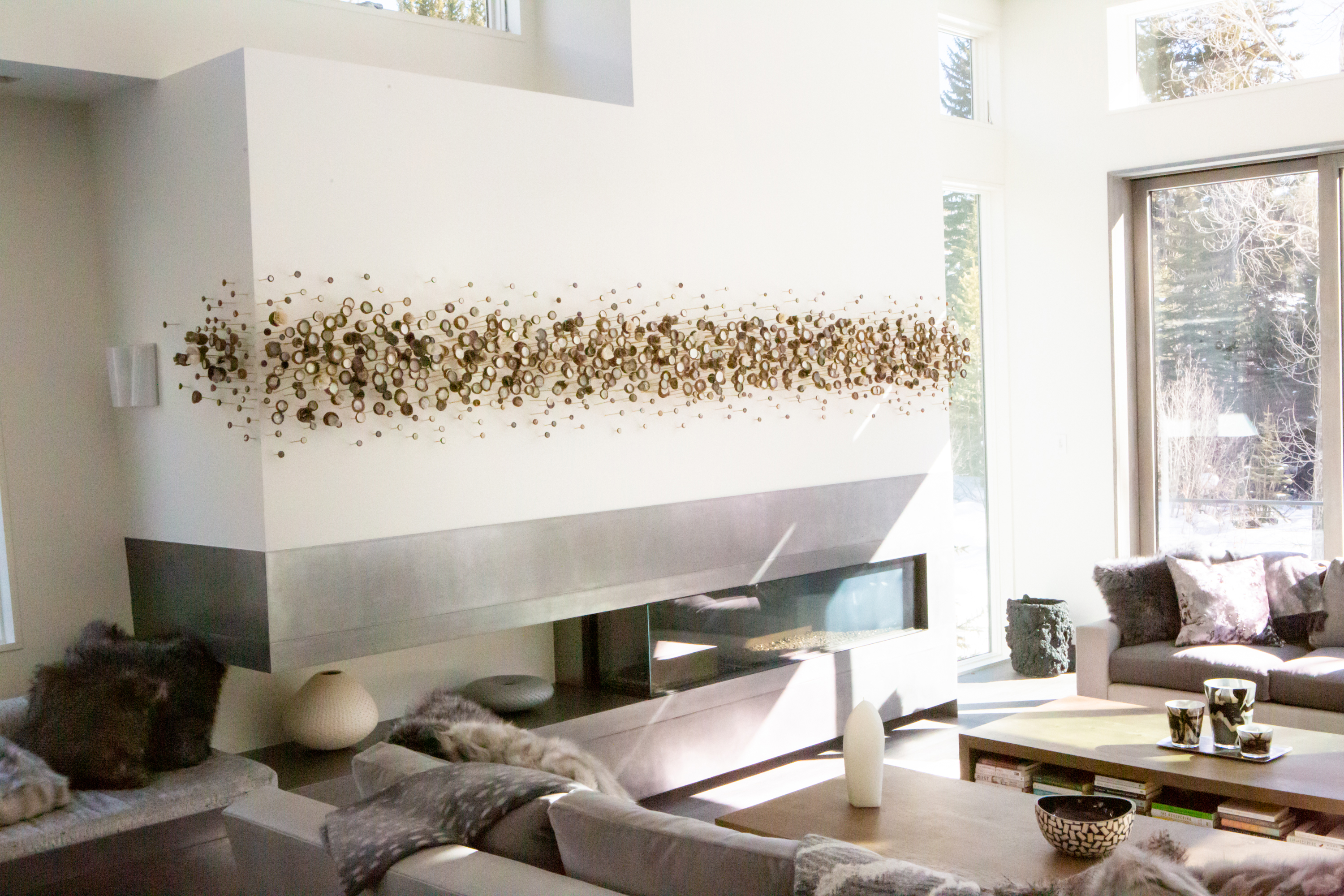