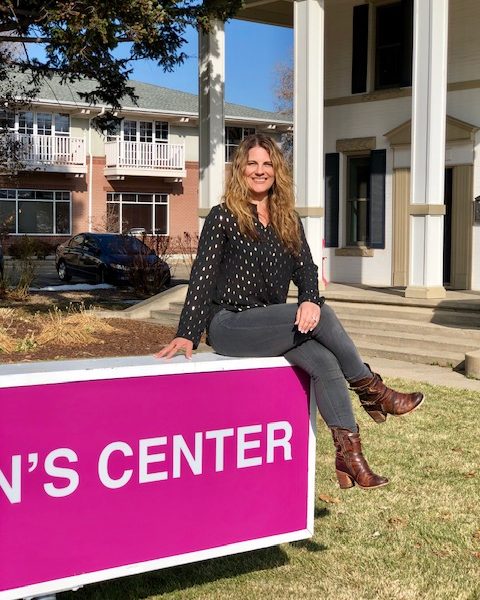 Today we’d like to introduce you to Kendra Miguez.

Thanks for sharing your story with us Kendra. So, let’s start at the beginning and we can move on from there.
I started a female empowerment/therapy center called Colorado Women’s Center in 2017. Before this, I had a private practice where I specialized in women’s issues, and I noticed that there was a big need for not only mental health support for women but coaching and inspiration as well. I also noticed that there was collective insecurity in women, showing up as negative self-talk, second-guessing, and feeling less than both at home and in the workforce. Working with these issues and recognizing them within myself, I became determined to help women discover their power, develop self-esteem, and become their own dictators of success. Once my practice became full, I expanded my business and began to hire therapists. Our staff continues to expand rapidly as we have recently opened a second location in Boulder, CO and have plans of opening a third.

My decision to become a therapist stems from one of my favorite quotes: “Be the teacher you never had.” My parents divorced when I was two years old, and my father’s presence in my life was very infrequent. And, after all of the education that I have had, I now know what a huge deficit that was–particularly for a girl. The father’s role in a girl’s life is to build confidence. He teaches her that she is safe and therefore, she can take on challenges that are conducive toward her development.

Due to my father’s inconsistent presence, I did not develop a connection to self, which is basically an inner guide and a solid sense of knowing who you are. And, because of this, I searched for connection outside of myself, which never ends well. I found myself in many, many dark places. And it really wasn’t until I became a mother that I realized how important this connection to self was–in fact, it’s vital!

Colorado Women’s Center was inspired by the lessons that I learned through pain and struggle. It was inspired by my deep need to give back and to make a difference. My earlier life was filled with co-dependence, insecurity, and self-destruction. I was lost and the only way that I could be found was to encounter a journey filled with steep mountains that I thankfully had no choice but to climb.

At the age of 31, I had my beautiful son, Caleb. The day he was born was a day filled with a joy only a mother can describe. However, we soon found ourselves alone and I was faced with the challenge of raising him completely on my own. Determined not to recreate the same patterns of abandonment, I knew that I had to do everything in my power to give my son a life of opportunity. Away from home and family, I turned toward education and government support. Always fascinated with human nature, when my son was eight months old, I started a graduate program in Psychology. I then went on to get two Master’s Degrees in four years while being a single mother.

My son gave me an inspiration to achieve like I had never felt before, and the moment he was born, I made the decision to write a new story for myself. As I wrote the new story, I realized how impactful it was and I knew that I wanted to share both the story and the lessons with other women so that they too, could learn to rewrite their own story and not be a victim of circumstance.

Great, so let’s dig a little deeper into the story – has it been an easy path overall and if not, what were the challenges you’ve had to overcome?
I don’t know if there can be any significant achievement without a struggle. The struggle is the growth. I struggled in every way imaginable. I was poor, scared, lonely, tired, and sometimes defeated. I cried myself to sleep more times than I can count. Every day I woke up not knowing where I would be tomorrow. I held onto hope, and I held on to myself–the deepest part that I was only able to meet because of the fear, the unknown, and the nights filled with tears. That self-discovery allowed me to find faith and courage. It forced me into the world and it forced me to hold my head high, regardless of the Single Mother stigma.

However, regardless of how much I believed in myself and my vision, I ran into many ups and downs to being a woman in my profession. One of the downs was realizing how much harder it is for women-owned businesses to get lending from banks. Even though the Small Business Administration says that women-owned new businesses are experiencing the fastest growth of any sector in the nation, the banks will still lend much more money for a startup that is led by a male than a female. So, just as we think we are making progress, we run into issues like this and it can be very disappointing.

How do we move through it? By supporting each other and coming together in cooperation versus competition. When we see another woman succeed, we need to celebrate her achievements because she is helping us all rise! The more we understand our worth, the more we can start demanding financial equality. But it takes individual and collective confidence for this to happen. I believe we are on our way!

Colorado Women’s Center – what should we know? What do you guys do best? What sets you apart from the competition?
Colorado Women’s Center specializes in female empowerment and we do this through therapy and coaching. At each location we have black and white photos on the walls of the women who have inspired us most; Amelia Earhart, Frida Kahlo, Rosa Parks, Malala Yousafzai, Oprah Winfrey, Maya Angelou, Michelle Obama, Ellen Degeneres, JK Rowling, Laverne Cox, and Billie Jean King. These women are on our walls because each one of them has found the courage and strength to break free from limitations, express their truth, and find the courage to live their lives fully. Some endured immense suffering, some endured ridicule, and some endured their own self-doubt. But, all of them managed to find their voice and their purpose, and as a result, made it possible for others to do the same.

We are different than just any therapy center because we believe strongly in our passion of female empowerment. And, our mission of building self-esteem in anyone who identifies as female, shows up in every inch of our center. We have bold colors throughout both locations, which represent the power of the female voice–Because we believe that women are not just meant to be seen. We also have inspiring women on our walls; they are African American, Caucasian, British, Mexican, Pakistani, Lesbian, and Transgender. We have named our therapy rooms after them and we help every woman who walks through our doors to find a similar level of inner strength. To say “No” when needed. To say “Yes” when scared. To not be a victim. To stand up for their worth. And, to discover their value. This has always been my vision and I have the most gifted and dedicated therapists to help me carry it out.

What moment in your career do you look back most fondly on?
Opening a location in Boulder, CO has been my biggest career milestone. It has been a dream come true to have a successful business in a city that is at the foothills of the Rocky Mountains. I feel blessed every day when I look out the window and see Boulder’s most iconic landmark, the Flatirons. There is so much health, education, natural beauty, personal growth and awareness in Boulder–It is wonderful to be a part of this community.

In addition, watching my therapists grow has been one of the most rewarding parts of my job. They are a huge part of my business. They show up with open hearts every day and touch lives in such a deep way. Being a therapist is not easy. We sit with people’s suffering. But, it also reminds us that we are all human, connected, and in essence… the same. Staying positive for my staff is essential. Letting them know that they are making a difference and changing lives is important. We all need validation–even therapists. As a team, we try to stay motivated and inspired. We have staff meetings and check-ins and are all dedicated to the mission of helping women. The energy of the Center is good–we know that we are a part of something special, something revolutionary. Women are rising! 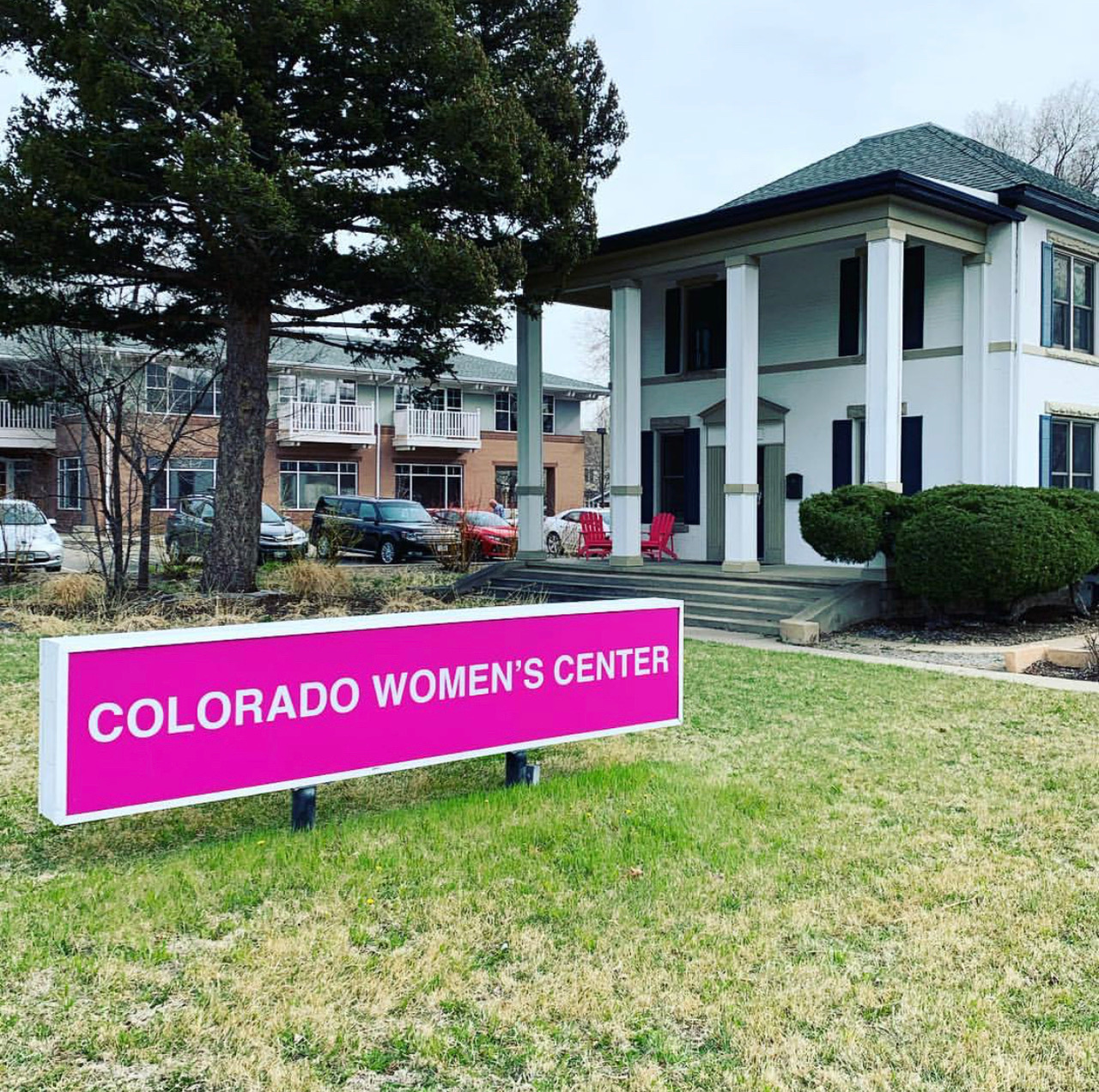 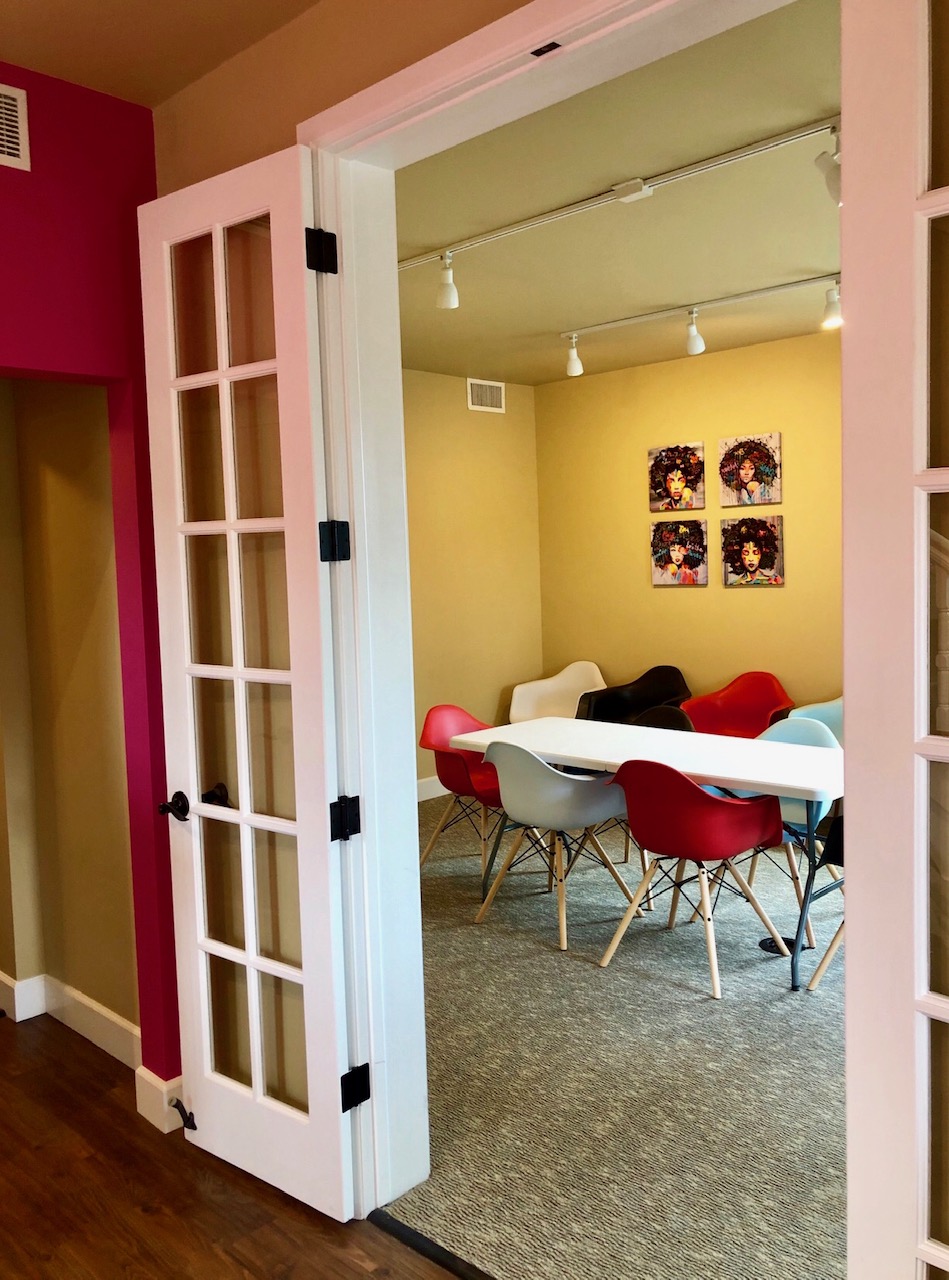 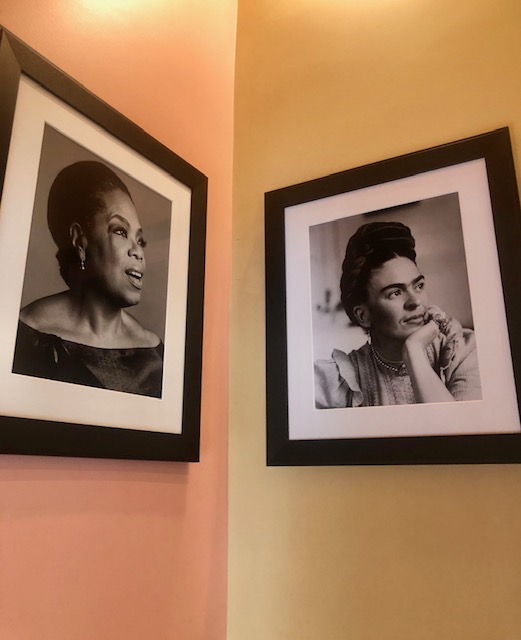 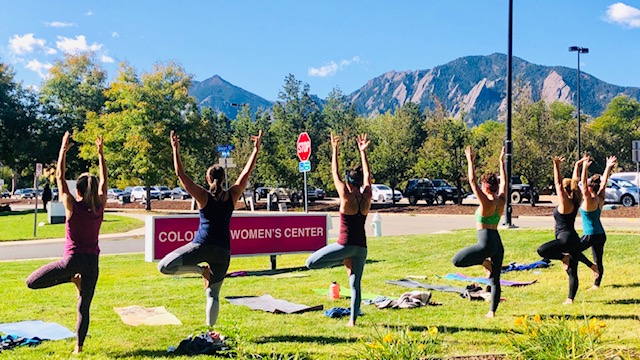 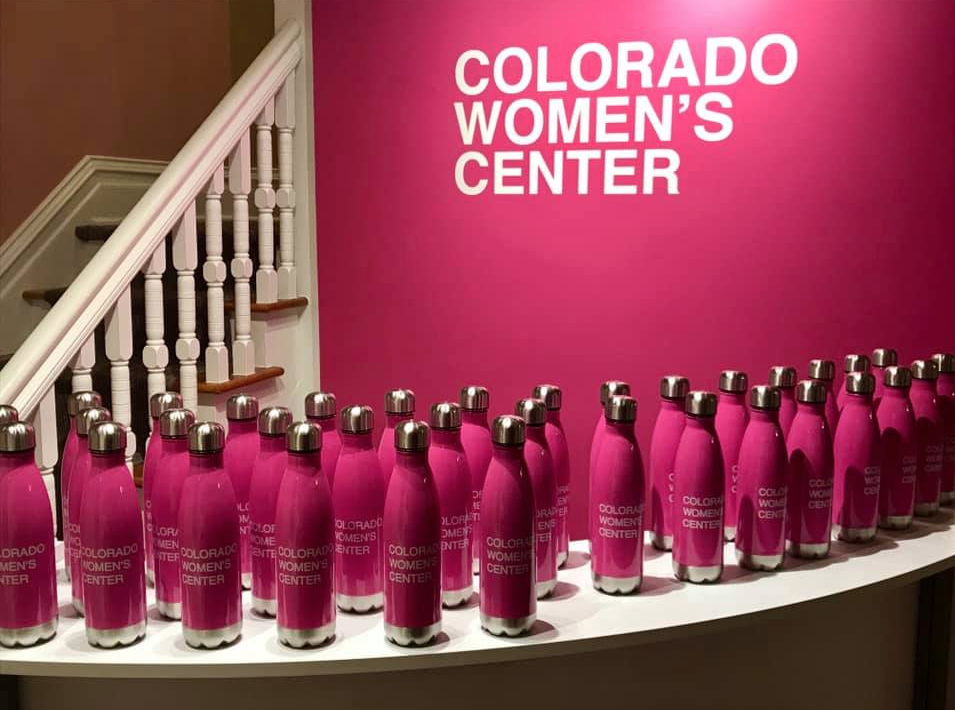 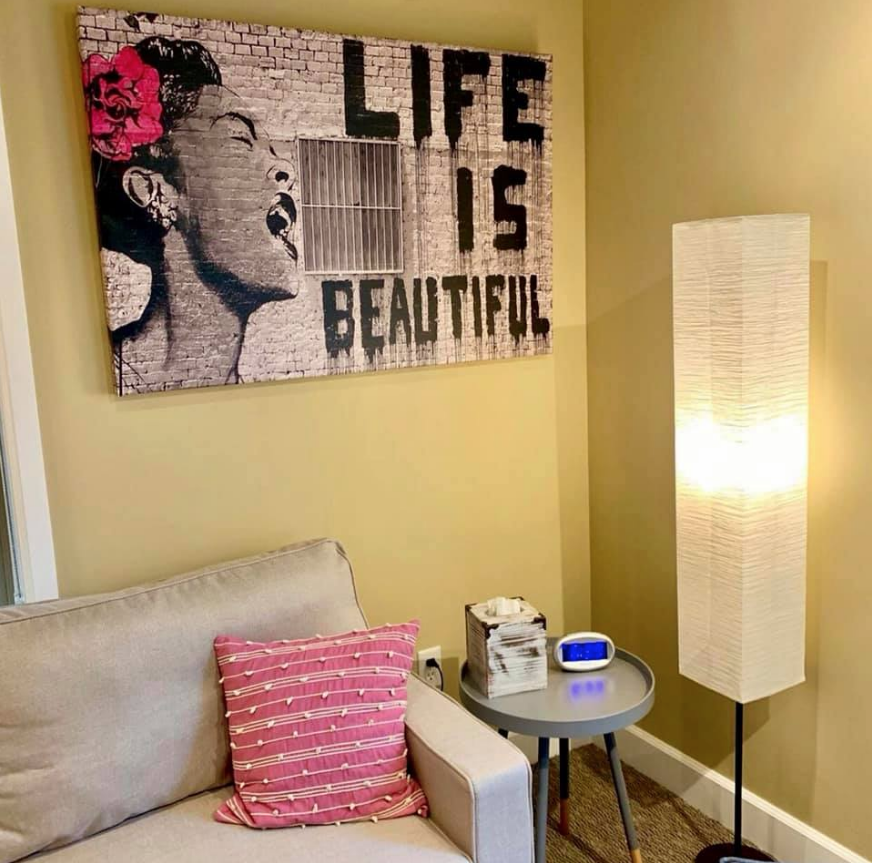 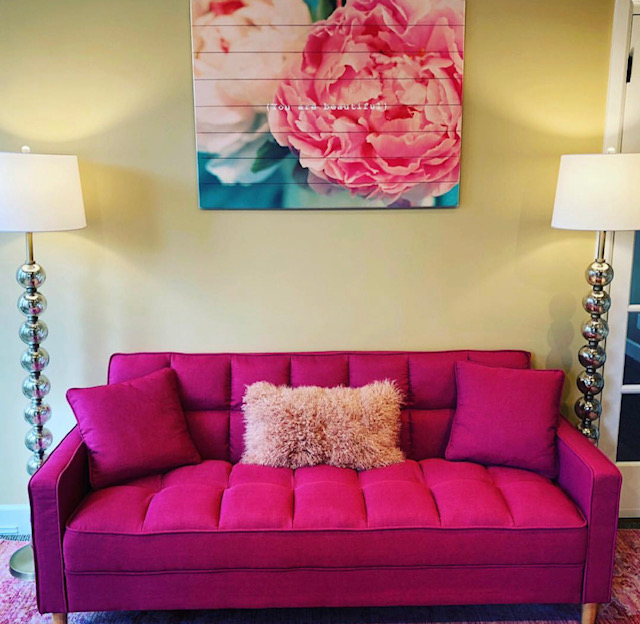