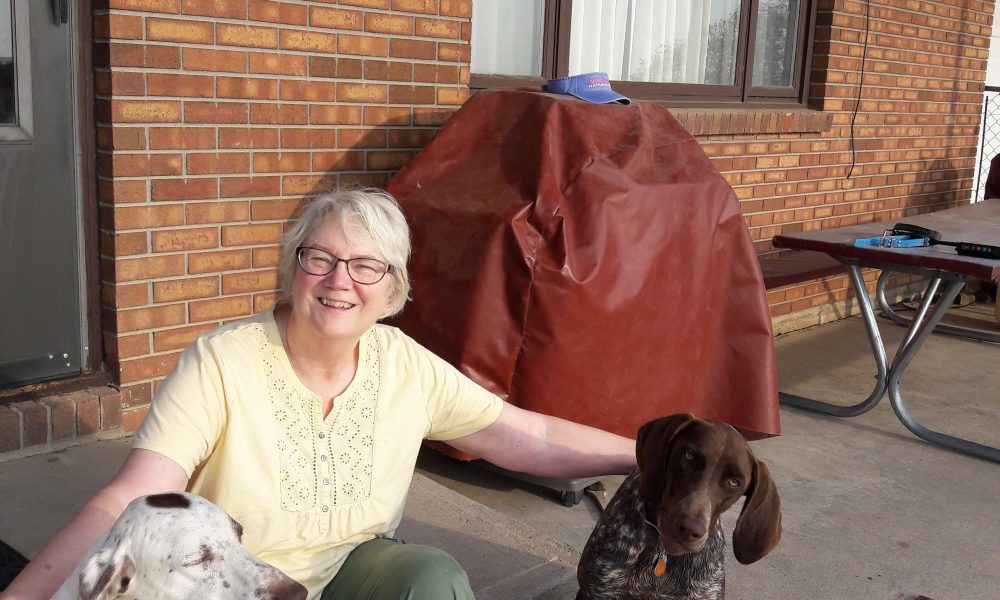 Today we’d like to introduce you to Margaret Mizushima.

Margaret, please share your story with us. How did you get to where you are today?
When I was a child, I wanted to travel the world and write stories. But a reality check in the guise of a school counselor and my mother stepped in during my last year of high school and guided me toward a career as a speech and language pathologist.

During the 1990’s, I was working hard in that career to establish and develop a Medicare-certified rehabilitation agency that offered occupational, physical, and speech therapy as well as social work services to children and adults with developmental and acquired disabilities. I put in long hours on the job but was still attracted to that rack of paperback novels at the grocery store checkout, and I yearned to be a storyteller with my own published books.

I sold my company in 1998 and was finally able to focus on career number two as a writer of fiction. I attended excellent Colorado writing conferences to study the how-to’s of writing craft: the annual Colorado Gold Conference sponsored by Rocky Mountain Fiction Writers and the Pikes Peak Writers Conference in Colorado Springs. After years of practice writing manuscripts in several different genres, a friend suggested I try my hand (and pen) at writing a mystery. I focused my study and education on that genre and came up with my first draft of Killing Trail: A Timber Creek K-9 Mystery. I worked on that manuscript for several years, revising and polishing until it finally earned me representation by literary agent Terrie Wolf of AKA Literary Management.

In fall of 2014, Crooked Lane Books, New York, NY, offered me a two-book contract for Killing Trail and the second book in the series, at that time unnamed and unwritten. We launched Killing Trail in December of 2015, followed by Stalking Ground in September of 2016. I’m extremely grateful that readers have embraced the series and it has been received well. Crooked Lane has since offered two more two-book contracts for a total of six novels in the series so far. Hunting Hour released in August of 2017, and Burning Ridge in September of 2018.

The last three books were all Colorado Book award finalists and Burning Ridge has garnered the Colorado Author’s League Award for e-book fiction as well as several national awards including a gold Next Generation award for action/adventure, a silver Benjamin Franklin award for mystery, and a bronze Foreword Indies book award for mystery. In addition, Burning Ridge was a finalist for the Willa Award in contemporary fiction from Women Writing the West, and a Silver Falchion award for police procedural.

It was also named a Best Book of 2018 by King’s River Life Magazine. Recently I was elected the Rocky Mountain Fiction Writers 2019-2020 Writer of the Year, an honor and an award I will treasure for the rest of my life. I’m so very grateful.

Book five in the series, Tracking Game, will release on November 12, 2019, and book six, Hanging Falls, is set to release autumn of 2020.

Great, so let’s dig a little deeper into the story – has it been an easy path overall and if not, what were the challenges you’ve had to overcome?
Writing a novel is never a smooth road, and for me, the journey took over a decade. Education is key, and attending writing conferences to learn how to develop characters, how to plot an intricate mystery, and how to approach agents and editors to pitch and sell the work were vital steps along the way.

In the meantime, a writer needs to develop a thick skin. I participated in critique groups to get feedback on how to improve my work, and sat in on many group and individual pitch sessions with agents and editors to try to sell my manuscripts after they were complete. I received countless rejections, revised my work countless times, and cried on many shoulders during those years. Thank goodness for my peers in the supportive writing community in the organizations I’ve joined, both for that support and the educational opportunities they provide.

Specific types of rejection that might be of interest: my own query letter to an agent sent back to me with NO scrawled across the front of it, an editor telling me that me pitching to him was like a guppy pitching to a shark—those were the worst. But for the most part, the agents and editors I’ve met over the years have been kind and professional, and some have given me valuable advice for improving my work.

We’d love to hear more about your art.
The Timber Creek K-9 Mysteries are police procedurals with heart. Each novel stand on its own as a crafted whodunnit while incorporating themes of family and social issues and a series arc for the protagonists who are dealing with those same themes. The series features Deputy Mattie Cobb, her patrol dog Robo, and veterinarian Cole Walker who work together to solve crimes in the fictional setting of Timber Creek, Colorado, a small town, mountain community that harbors secrets and danger.

Mattie is a spunky, K-9 handler with loads of baggage that she’s been unpacking slowly throughout the series. She was abused by a father figure as a child—which left her with connection issues and repressed memories—and abandoned by her mother at age six. After being in the foster system for years, she ended up in a good home with a foster mom who’s a significant figure in her current, adult life.

Cole Walker is a recently divorced single dad who is learning how to parent his kids after his wife suddenly left town. He and Mattie meet when his teenage daughter’s friend is killed in the first book in the series. Though they’re drawn to each other from the start, they both have issues to work through before they can get together. And Robo, Mattie’s patrol dog and new partner, is a high-energy German shepherd who helps Mattie learn to trust so they can become the best K-9 team they can be. He is a wonder dog, cross-trained in patrol and narcotics detection. Each book weaves together K-9 work, veterinary work, and a crime that involves both animals and humans.

I’m proud to have received industry reviews such as:

“Winning heroine…strong debut…a realistic view of how a K-9 team works, treating Robo as an important character but never stooping to anthropomorphism. And it’s impossible not to fall in love with Robo.” ~Publishers Weekly starred review

“A terrific debut with a refreshing detective duo—Deputy Mattie Lu Cobb and Robo, her K-9 partner! Margaret Mizushima has crafted a compelling and savvy mystery that explores the big secrets in a small western town. I was cheering on Mattie and Robo every step of the way.” ~Margaret Coel, author of The Man Who Fell from the Sky

“Books like Burning Bridge make me appreciate the series format so much because…characters become so real, they feel like friends. Mizushima’s sleight of hand as a genre writer (she’s particularly adept at red herrings) only makes this fine series that much more enjoyable. I’m very much looking forward to my next encounter with Mattie Cobb.”

What moment in your career do you look back most fondly on?
Being elected Writer of the Year by the membership of Rocky Mountain Fiction Writers is my proudest moment so far. This organization has been key in my educational process in how to become a fiction writer. It’s a great organization that provides opportunities for education and professional support. I’m so very grateful for this honor, and it has offered wonderful confirmation that I’m on the right track! 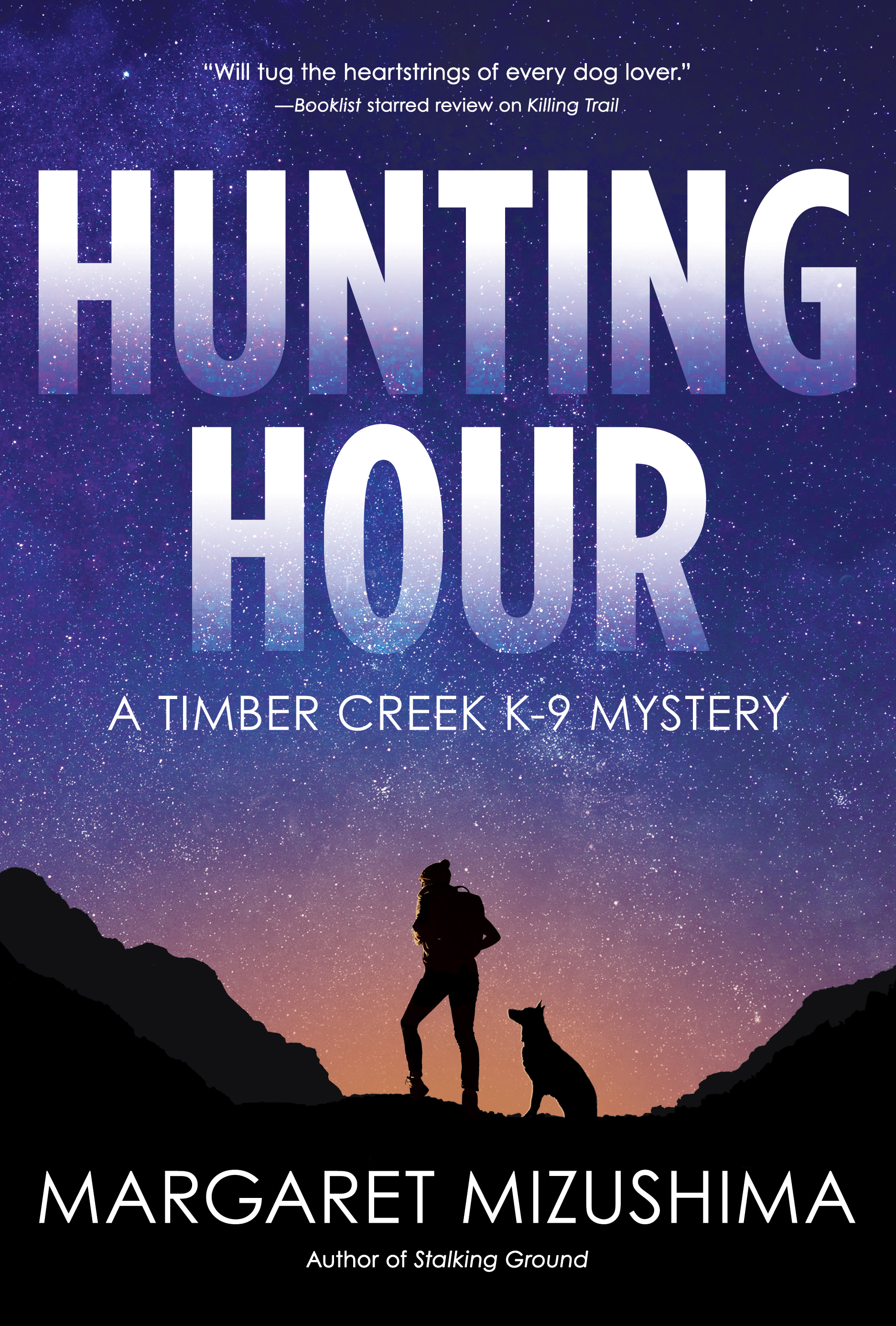 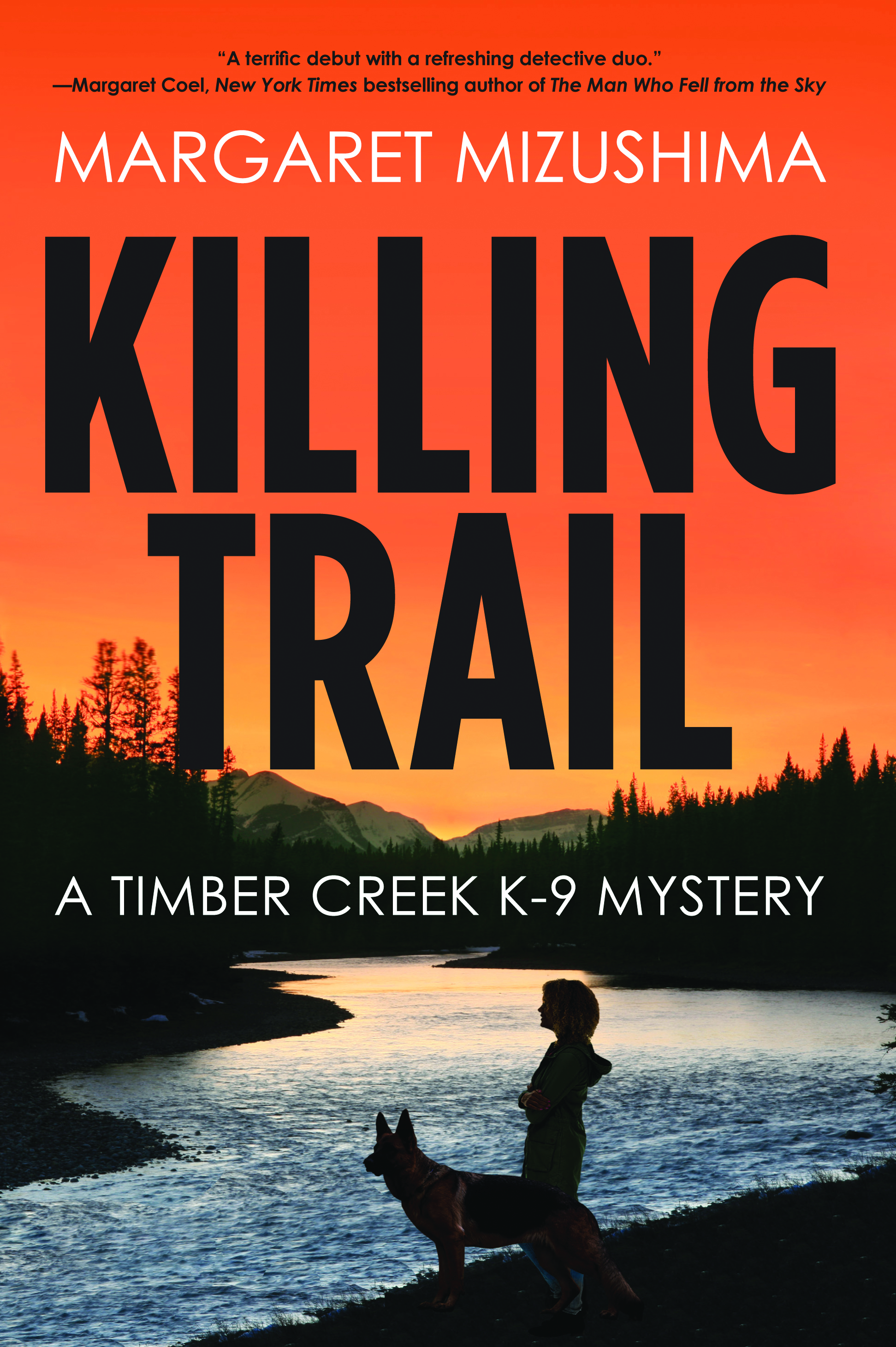 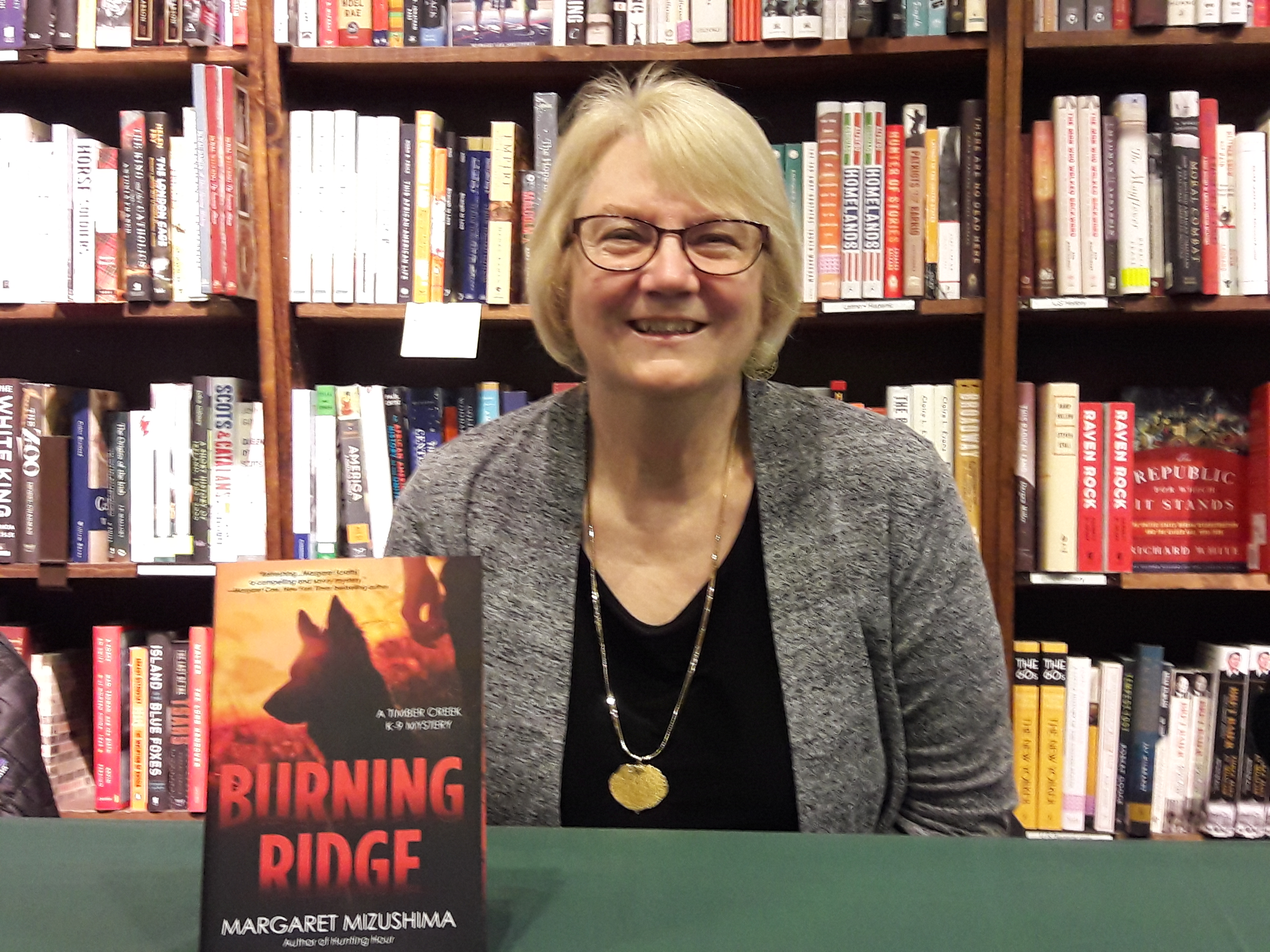 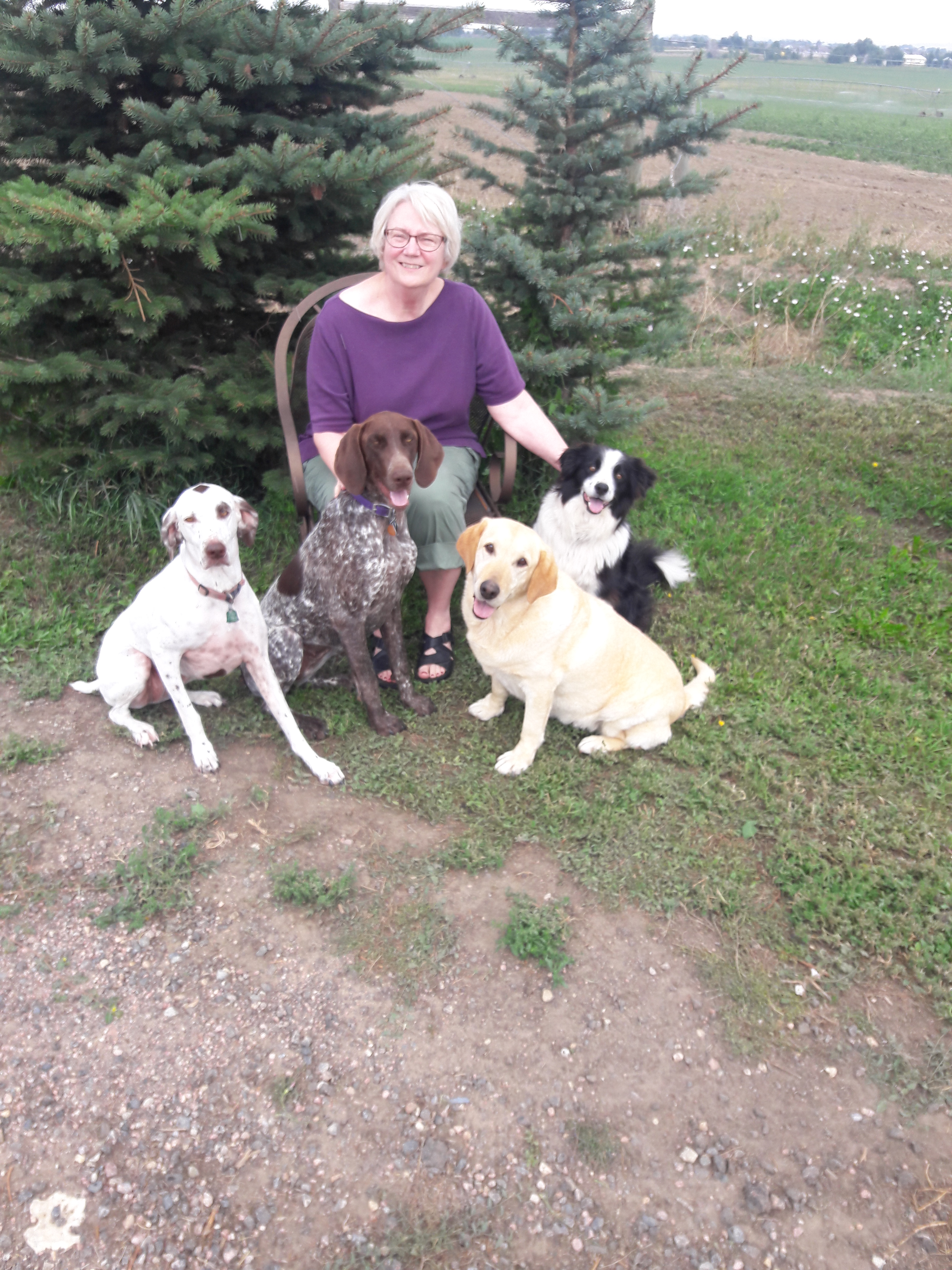 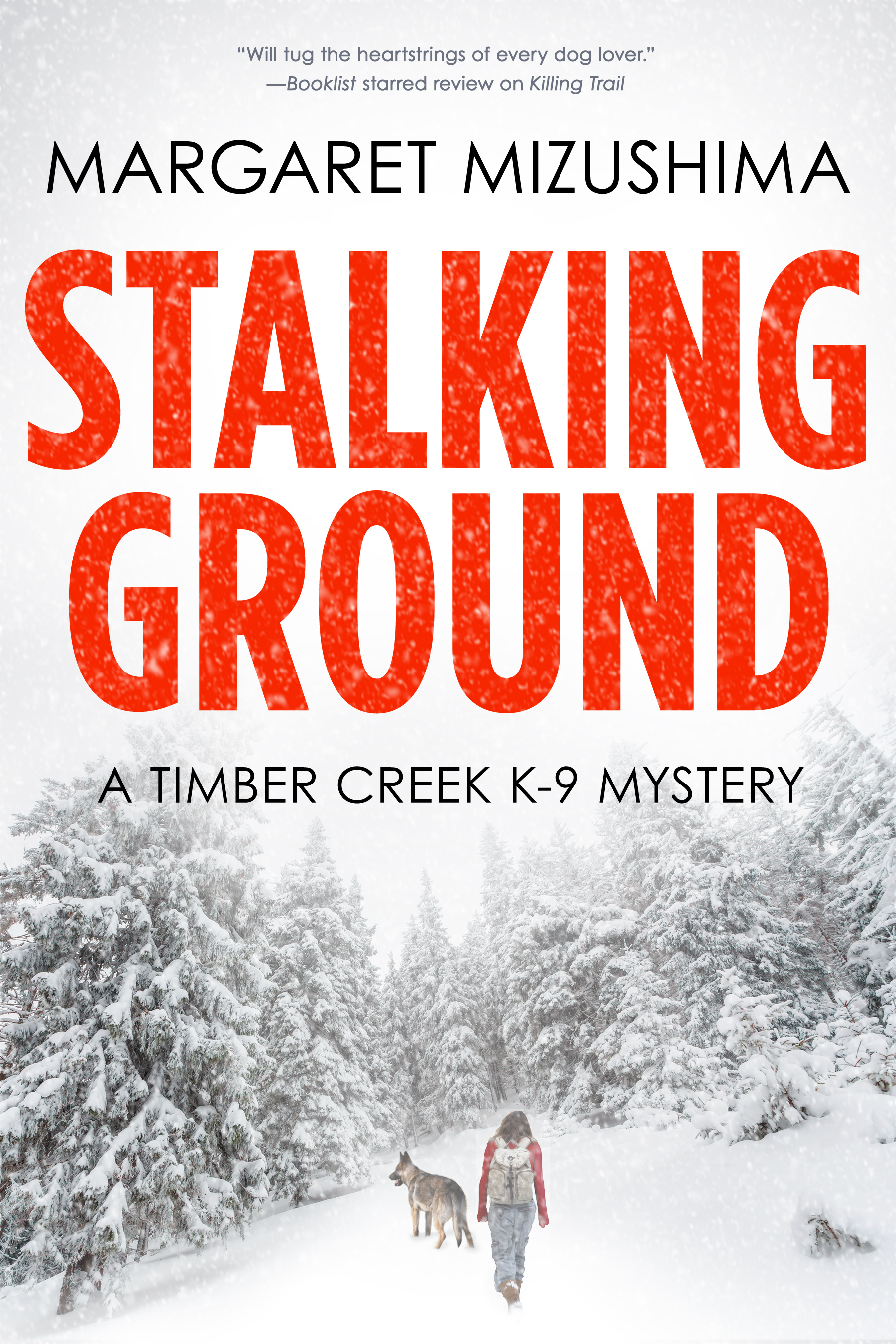 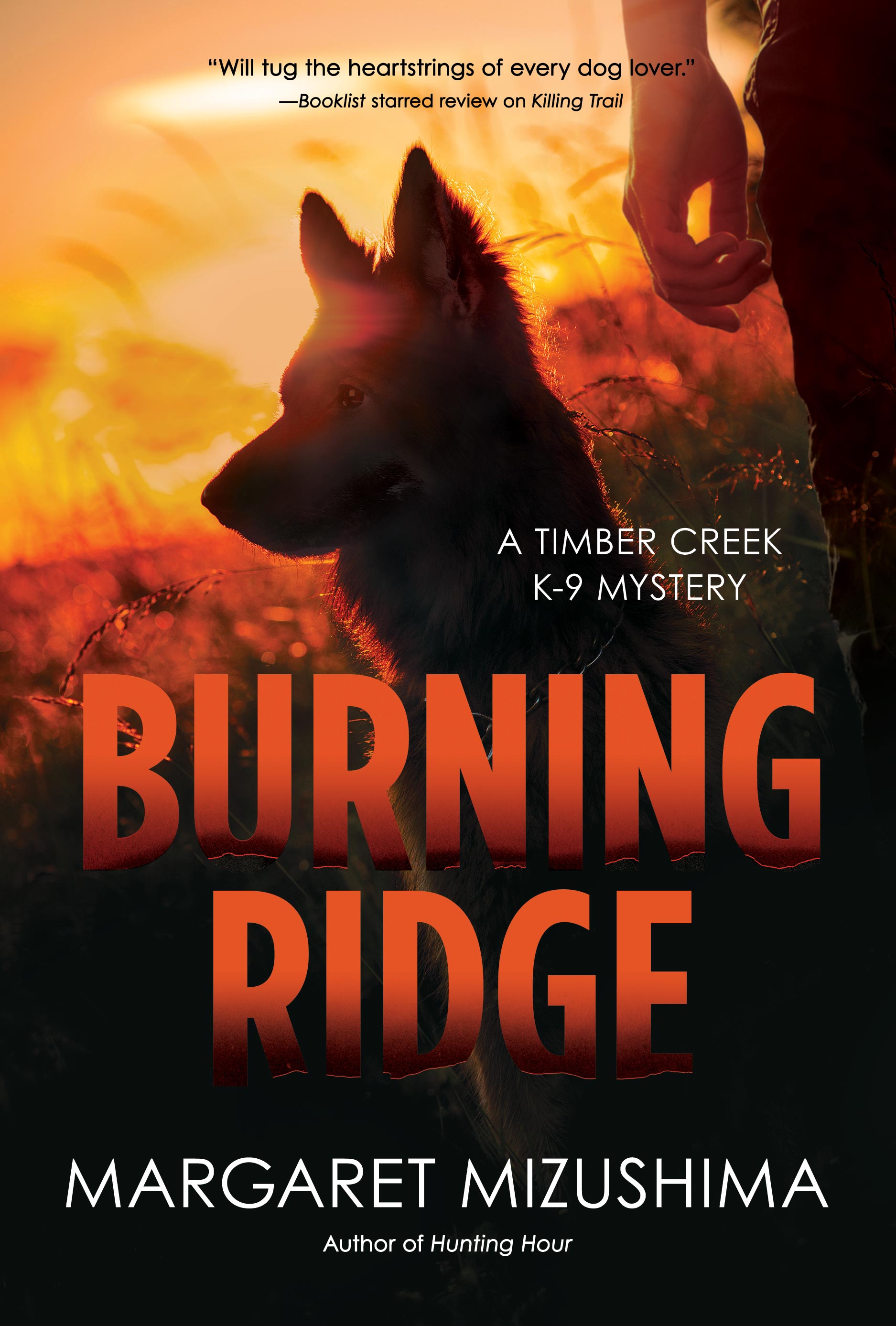 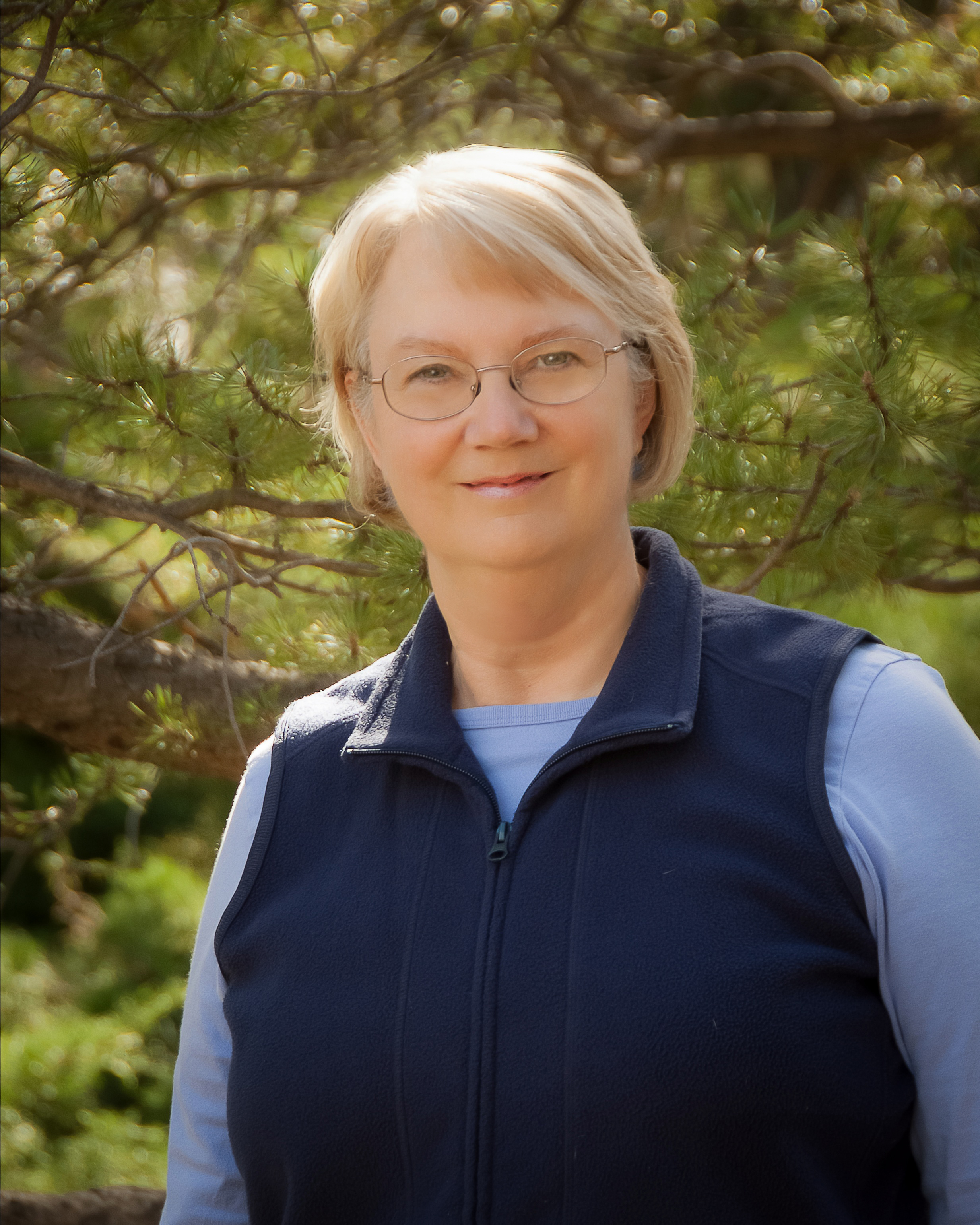 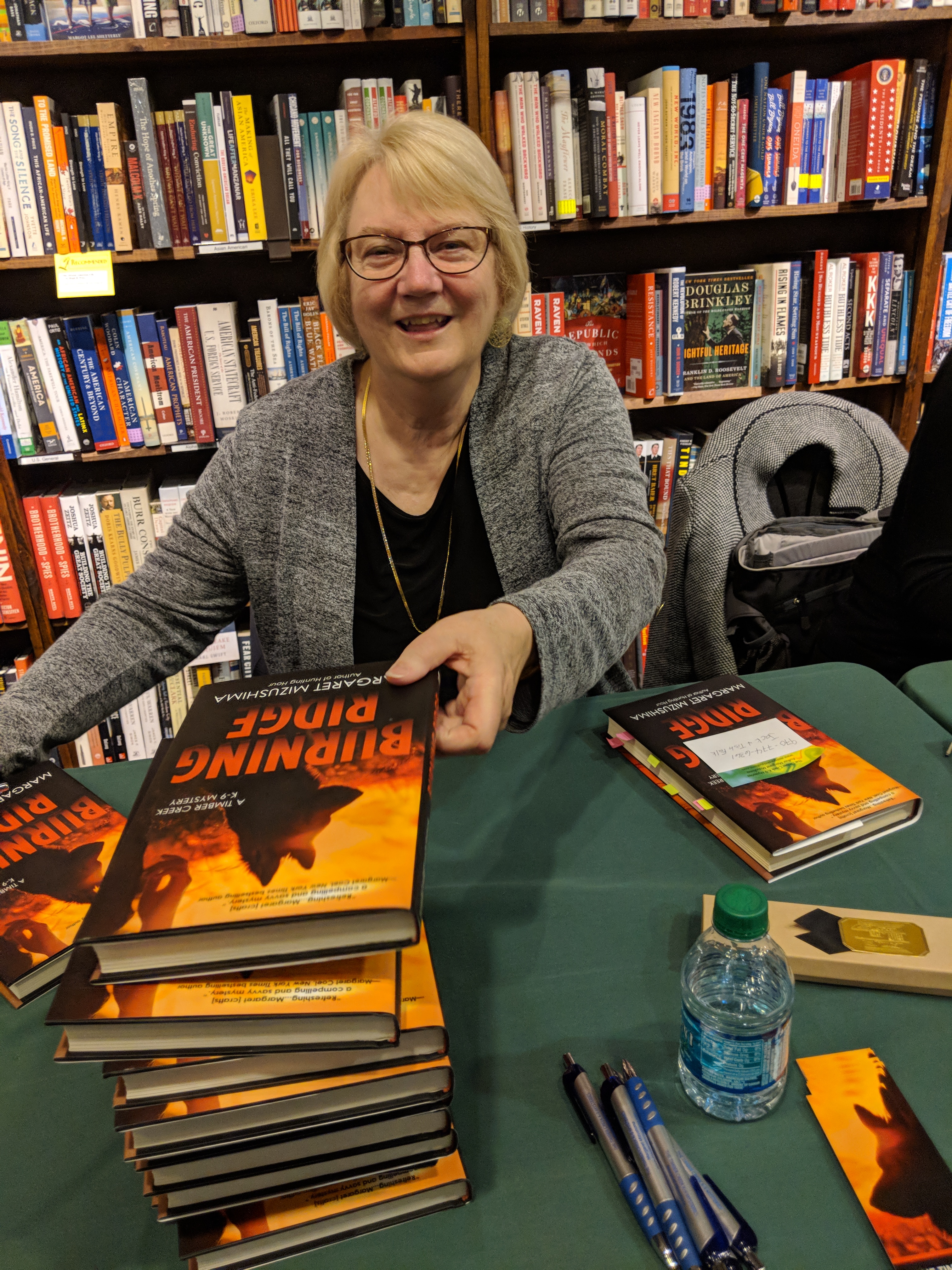 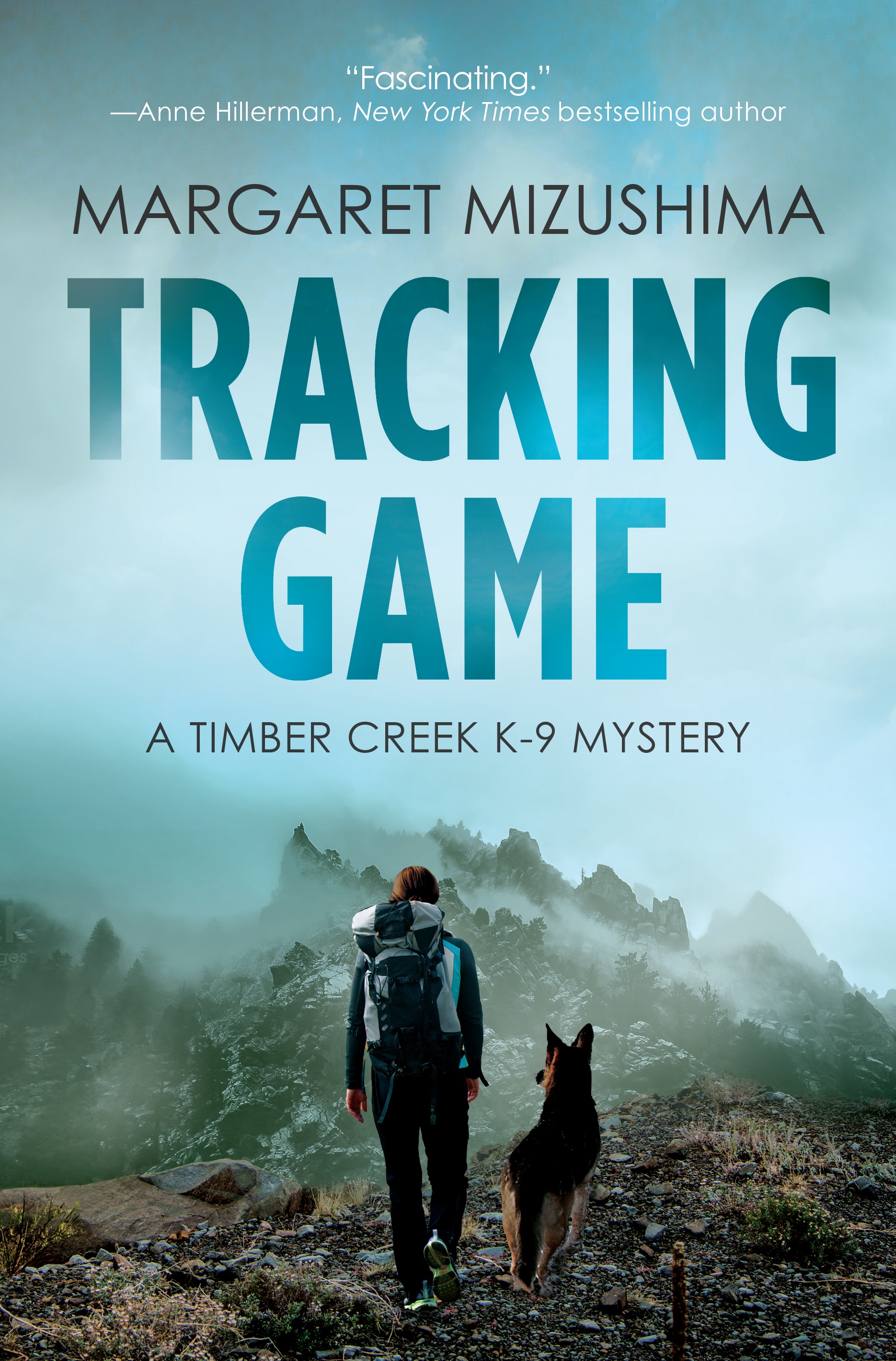