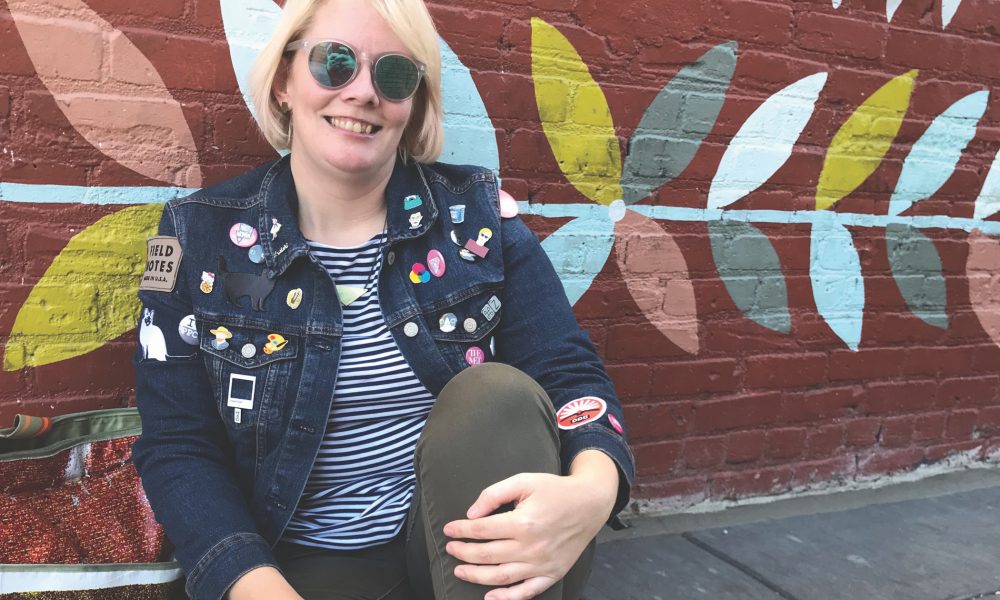 Today we’d like to introduce you to Noel Dolan.

Thanks for sharing your story with us Noel. So, let’s start at the beginning and we can move on from there.
I started my interest in graphic design as a kid when my dad gave me a bootleg copy of the very first edition of Photoshop. I was only around six, but I immediately started playing with the software and creating. I kept packages and advertisements growing up because I liked their design or typefaces. I just didn’t quite know what I was looking at or that even graphic design was a career.

As I got into high school, I began to seriously think about pursuing a career in design. Unfortunately, my high school art teacher told me I was terrible at drawing and had no future in art. At the time, I didn’t understand the difference between art and design, and I was also intimidated that I’d have to take fine art classes as part of a design program.

I majored in English with a creative writing concentration at Colorado State University, but the only job I could get after graduation was doing graphic design for a small promotional products company. It was then I realized how much I really loved design, but also that I knew nothing about it. After a year of working, I decided to go back to school at The Art Institute of Colorado in Denver. Shortly after starting school, I secured a part-time production assistant position with the National Strength and Conditioning Association (NSCA) in Colorado Springs.

I worked 25 hours a week and commuted to Denver until I graduated. NSCA then hired me on full time as a production assistant. I was really grateful to have a position in the industry, and I learned a lot about the technical side of design such as print production, but the creativity was lacking. I kept hitting walls when I tried to be different, creative, try new ideas. At first, I thought it was my supervisor, but after he left, I was promoted to run the department, and the same push-back and narrow-mindedness was still there from the internal clients and upper management.

The last three years I worked there, I became extremely beaten down emotionally. The majority of the feedback I received was not constructive criticism, but personal attacks. Nearly every new idea I tried to pitch was shot down. I wasn’t seen as a value to the company with my creative ideas. I was paid well, and I was useful for production work as well as managing vendor relationships and designers under me. But, the environment for creative expansion was stale and toxic.

During that time, I reached out to some local Colorado Springs design firms to see if they wanted to meet and talk shop. I was starved for creative mentors and getting involved in the community. Luckily, they welcomed me with open arms, and I was asked to join the board of the AIGA Colorado satellite chapter in Colorado Springs. I’d finally found my tribe and felt accepted. However, most of me felt like I didn’t belong. Everyone was kind and welcoming and complementary of my work, but I always felt like I was at the kid’s table. The caliber of my work was nowhere near theirs, and I felt trapped with my employment that I’d never get out of it.

Being a part of AIGA was helping me through a dark time and giving me an outlet for my creativity, but the imposter syndrome persisted. I was frustrated with the roadblocks at NSCA, and I felt inadequate among my fellow designers. Things were getting so bad at work, I was questioning if I should leave design just to leave that job since no other opportunities were available. I really started to believe I wasn’t good at design, because interviews came and went with either no offers or offers that involved a large pay cut and lack of benefits.

This was one of the lowest points in my professional life. I was discouraged, trapped and felt like I had no way out. I knew I didn’t have the portfolio to get me a better position because of the limits at my job. I tried to do freelancing and passion projects, but it was a lot of the same. I finally had a chance to do a great project at NSCA, one that I believed could win awards. Awards were very important to the industry I worked in, and I felt that if I got awards for design, that I’d finally be valued for my creativity.

I won two ADDYs (American Advertising Federation Awards) for the campaign I did. I thought it would change things. Just a few weeks after winning, one of the leaders at the company told me I’d devoted my entire life to a career path nobody cared about or thought was important. I was devastated. I didn’t even know how to process the information. I’d worked so hard to win the ADDYs, but I’d also worked so hard to make the company better through good design. I’d worked through lunch. regularly and met every deadline on time.

Luckily, a position finally opened at Pikes Peak Community College, and thanks to referrals from my colleagues in AIGA, I was given the job. My boss took a chance on me, which I will never forget. I’d told him in my interview, “look, I know I don’t have the portfolio that many of my peers have, but I know it’s in me to be a great designer. It’s my passion, the only thing I want to do in my life and I work really hard. If you give me a chance, I know I can do great things for PPCC.” He took the chance, and it changed my life.

I’ve been at Pikes Peak Community College for two years. During this time, I’ve won 13 awards for my work. I won regional and national awards from the National Council for Marketing and Public Relations (membership association for community college marketing teams) and local and regional ADDY awards. In May 2019, I was named the American Advertising Federation Designer of the Year for the Colorado Springs chapter. I was also contacted by Ladyfingers Letterpress to teach calligraphy and sell my prints at their shop. None of these doors would have opened had PPCC not given me a chance. But, they also wouldn’t have happened had I not taken the steps to reach out and get involved with my design community. This industry is all about who you know, and it’s what lead to my dream job.

Overall, has it been relatively smooth? If not, what were some of the struggles along the way?
It has been a very turbulent road. I struggled from day one with my art teacher telling me I had no future in art through my colleagues at my first job telling me I was bad at design, wasted my time studying it and pretty much wasn’t worth anything beyond being a production assistant. I struggled so badly with self-esteem and imposter syndrome during the majority of my 16-year career.

The last three years at my job, it was so bad, I used to dream about driving my car into a tree just so I wouldn’t have to go to work. Let me be clear that I was not suicidal, but it was more that I needed an escape from the pain of going into work. I’d have anxiety attacks every Sunday night and whenever I’d get back from a vacation.

I tried to leave. I tried over and over to find a new job. I’d either get really close, or I’d get offers where I couldn’t afford to leave. I’m single, and I have only my income. I had to be careful not to jeopardize my finances and ensure that I’d have health insurance. So, unfortunately, that trapped me even longer.

We’d love to hear more about your work.
My company, Noel Dolan Creative, is only a small part of my design career. I work full time as a designer with Pikes Peak Community College and then I freelance on the side.

I’m generally a jack-of-all-trades as a print designer, but my favorite areas are branding design, invitations and projects where I can incorporate hand lettering or calligraphy. I tend to only take on freelance work where I really believe in the client’s mission or want to help their business, or it’s an amazing opportunity. I recently landed the dream client of getting to do packaging design for Sakura of America. They make art pens such as gelly roll pens, paint markers and brush markers. I own the majority of their products, so when the referral came along to design their packaging, I went insane. That’s probably been my favorite project for Noel Dolan Creative. I also really enjoy teaching calligraphy and selling prints at Ladyfingers Letterpress. I love to make things that are more artistic and less corporate, and that’s a great resource.

I think what sets me apart is that since I only take on select jobs when you’re my client, you’re my only client. You get all of my free time devoted to your project until it’s done. I’m also really passionate about design and want desperately to make the world a more beautiful place.

Any shoutouts? Who else deserves credit in this story – who has played a meaningful role?
There are so many people who deserve credit. First of all, I have to be cliche and thank my parents first. They offered so many words of encouragement when I’d cry about the latest drama at work or felt like I’d hit an emotional rock bottom with my career. They helped keep me going.

The two design firms I first reached out to were Design Rangers (owned by Chris and Jenny Schell) and Fixer Creative (owned by Troy and Sara DeRose). Their owners took me under their wing. They were the ones that invited me to join the AIGA COS board and helped me get involved with the community. They became my rock and some of my closest friends. I absolutely would not have made it without them. Design Rangers were the ones who recommended me to my current boss, Warren Epstein at Pikes Peak Community College. I literally owe my job to them and to Warren, who believed in me enough to take that chance.

I have so many colleagues in my life now both at work and through AIGA that continue to enrich my life personally and professionally that it’s too numerous to name names. However, Chris, Jenny, Troy, Sara, and Warren are the ones who changed my future.

I am so grateful to them that I am trying to pay it forward. I work closely with many of PPCC”s design students as a mentor and help them improve their work. I served as field director of AIGA COS for two years and created programming that expanded our creative community. I will always continue to pay it forward and help those that are struggling and need a hand up. 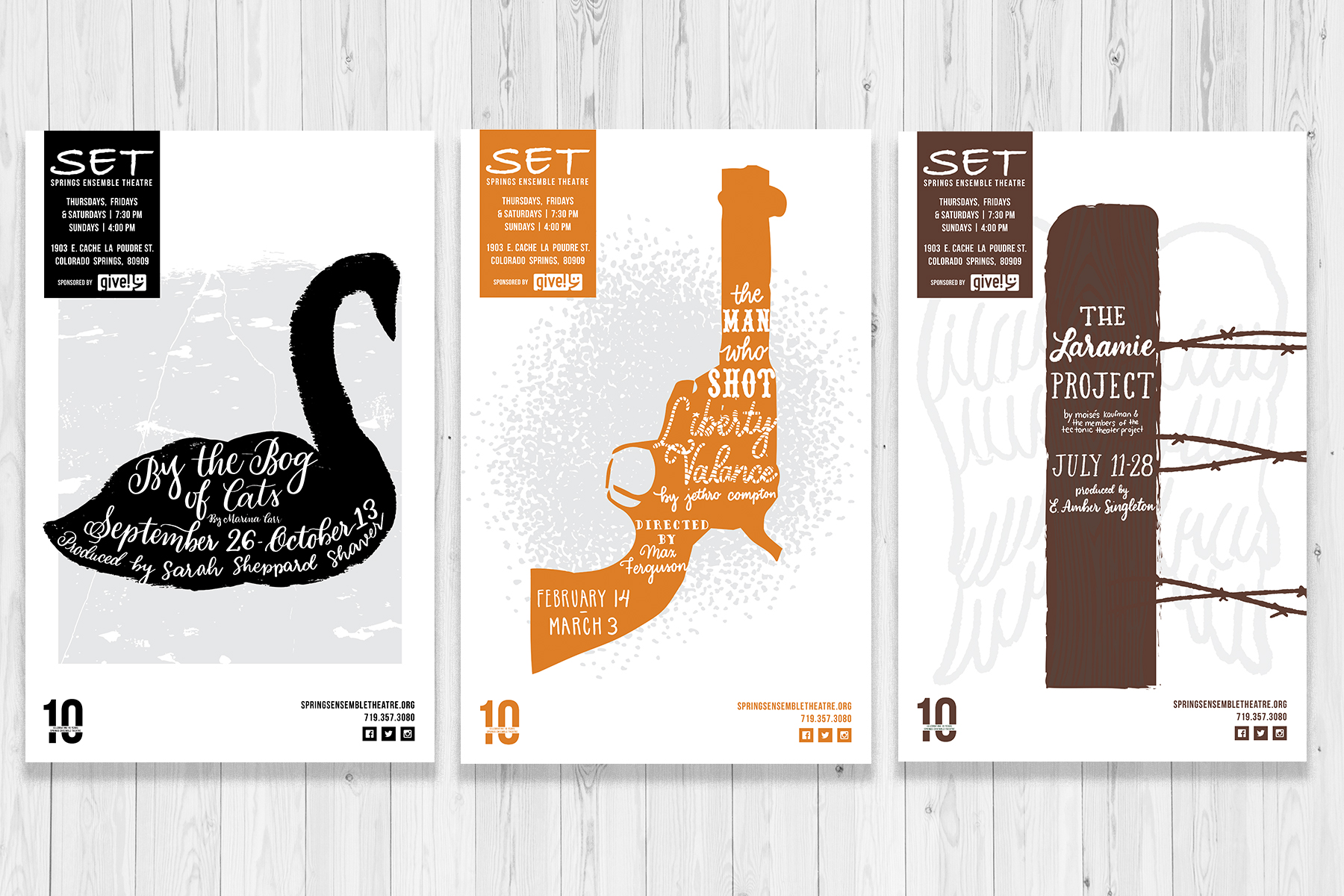 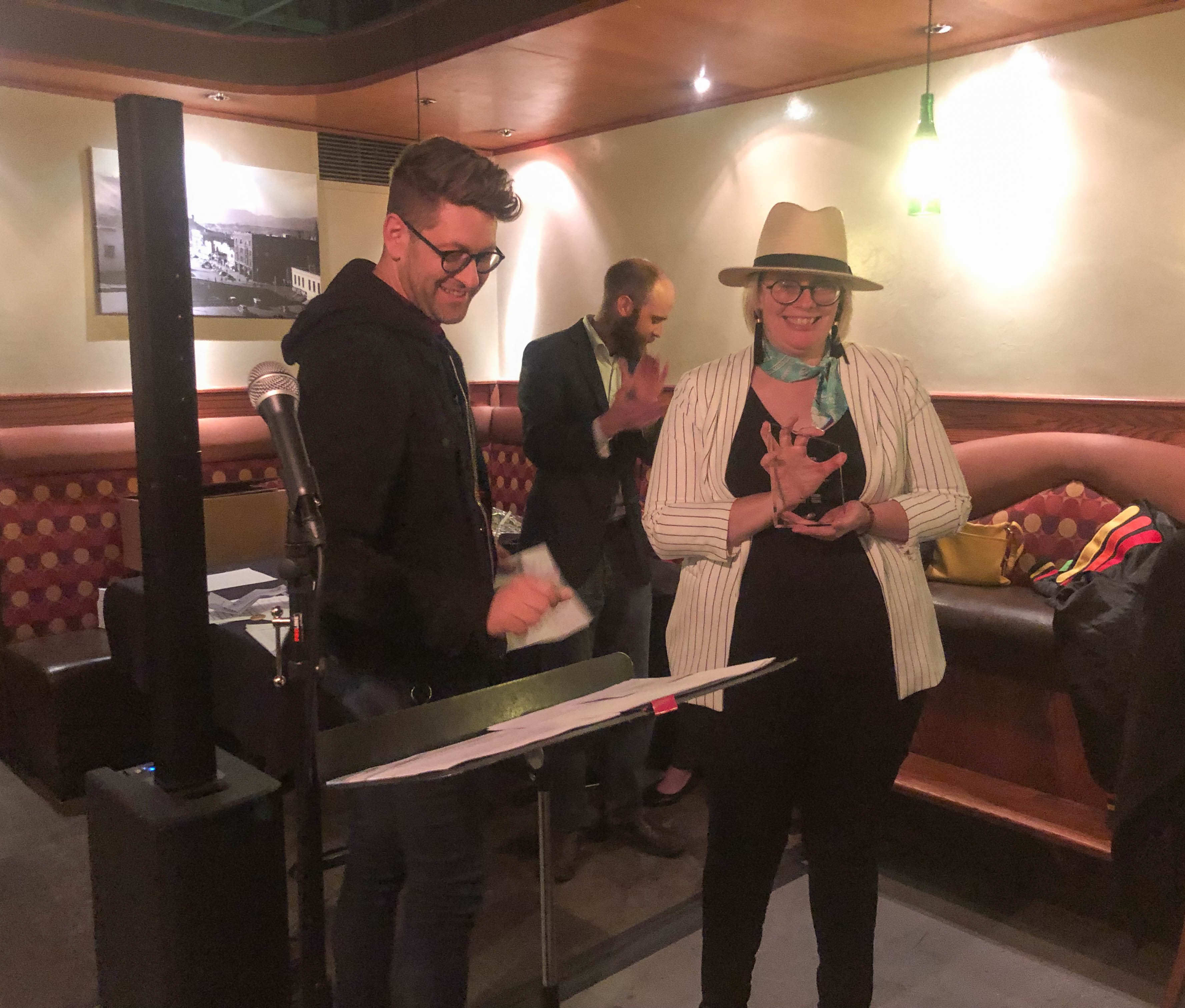 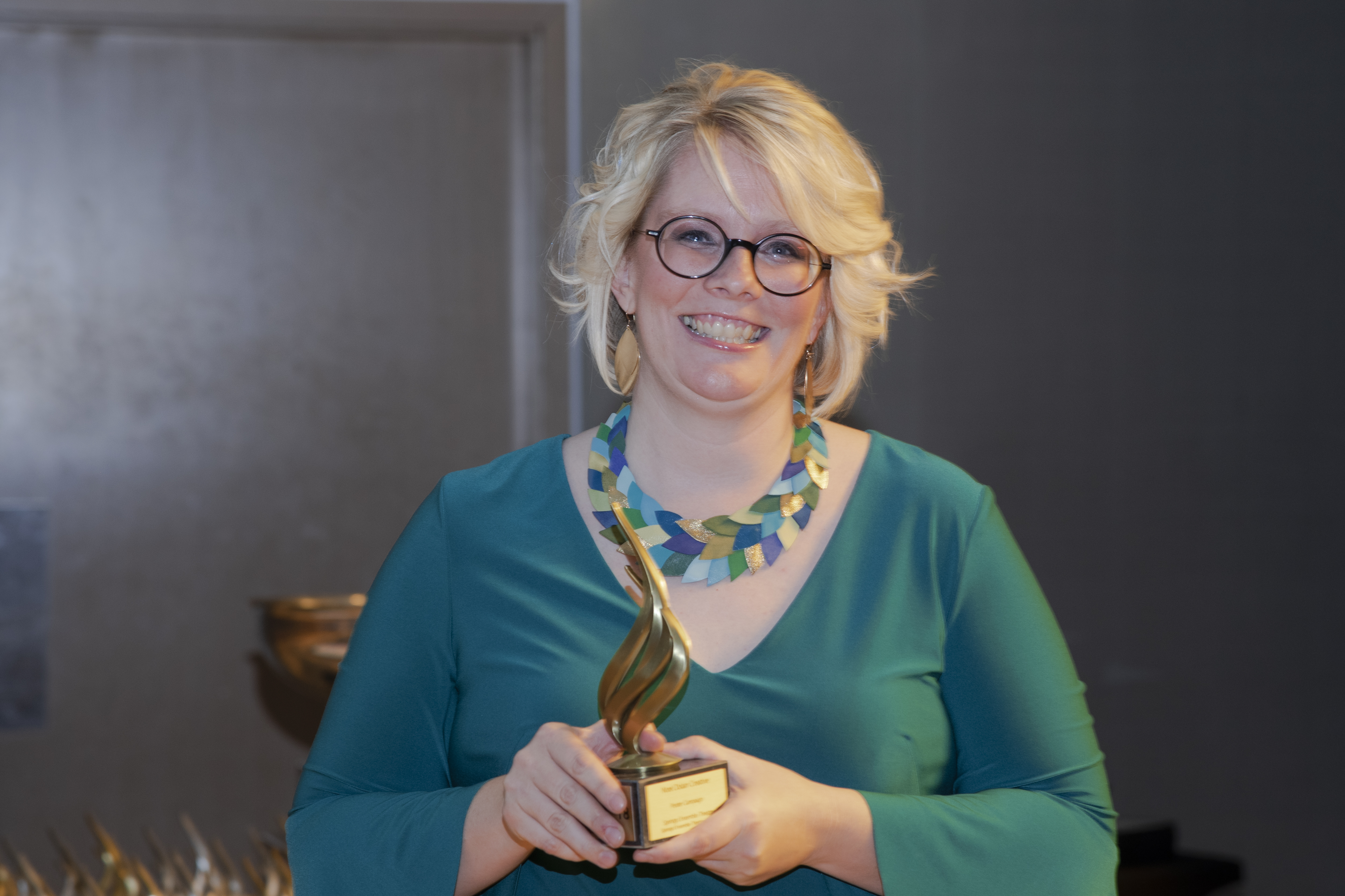 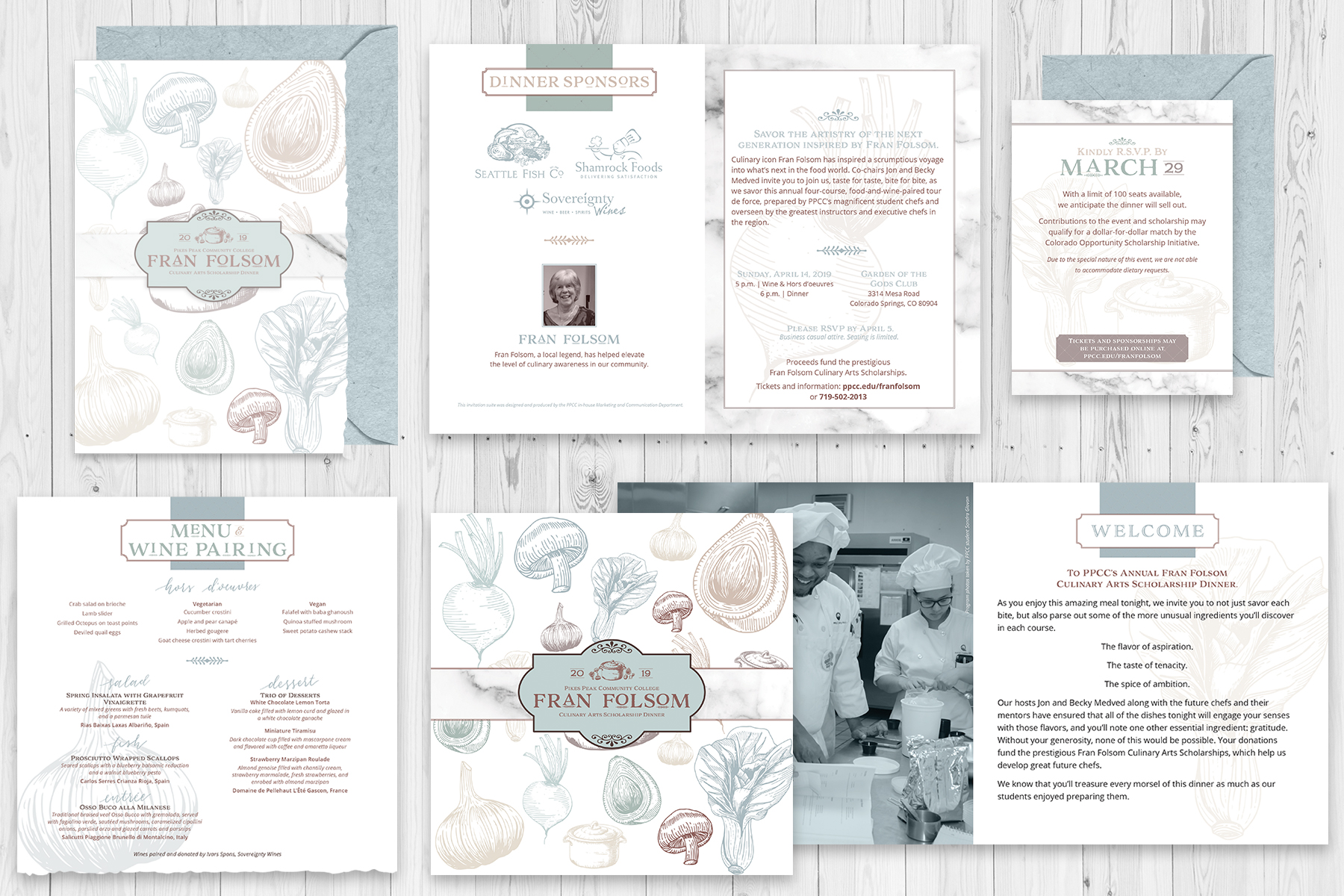 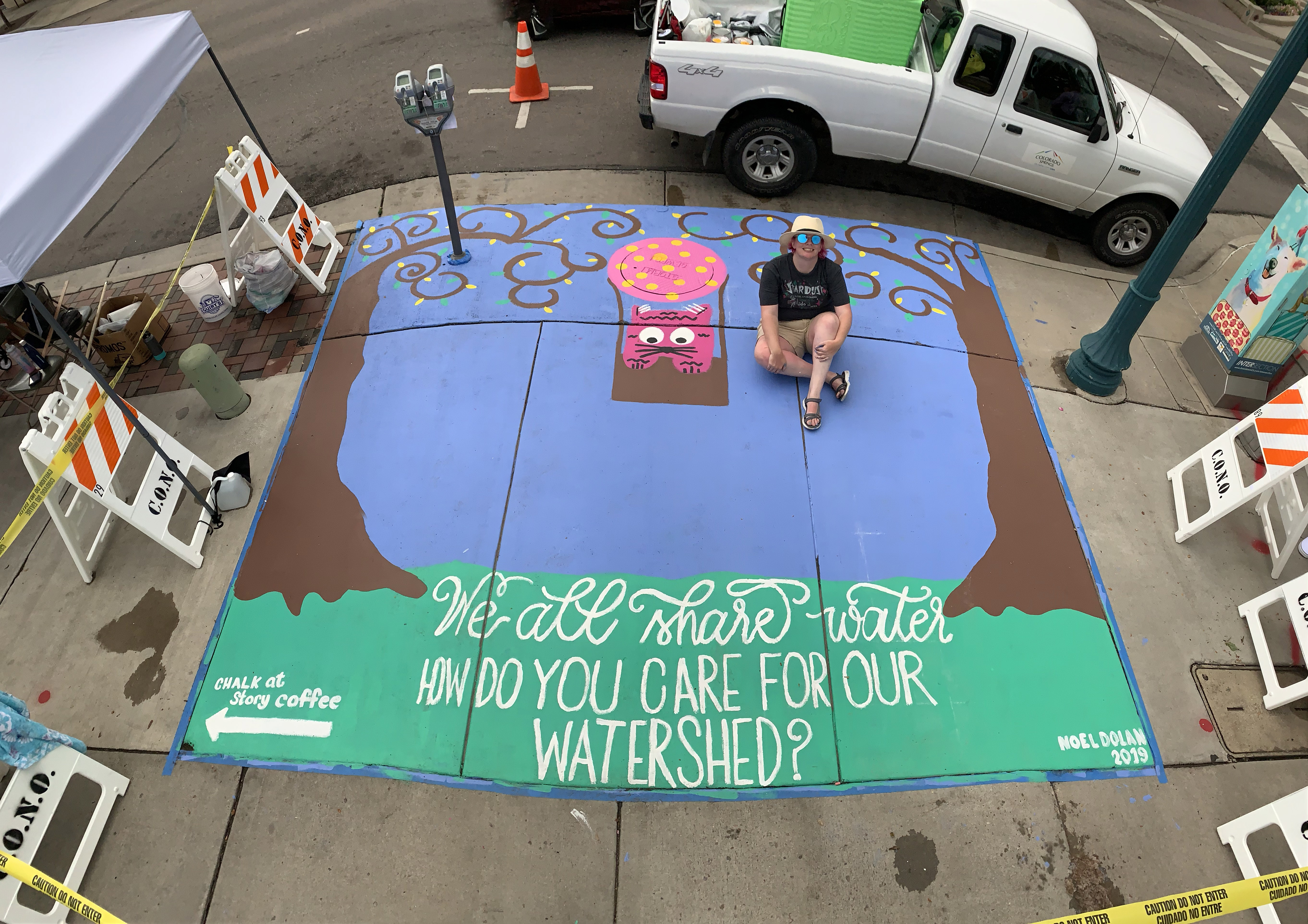 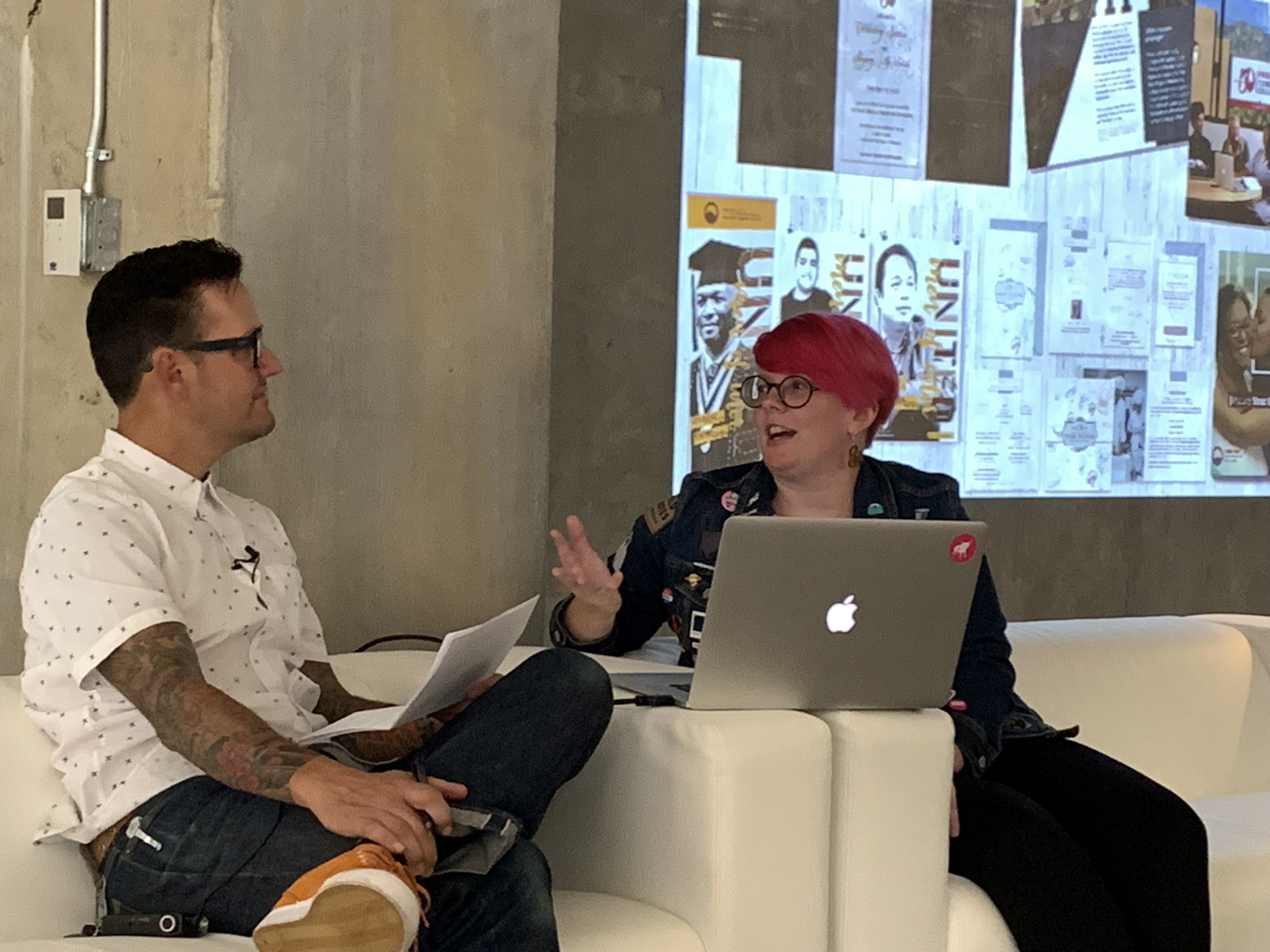 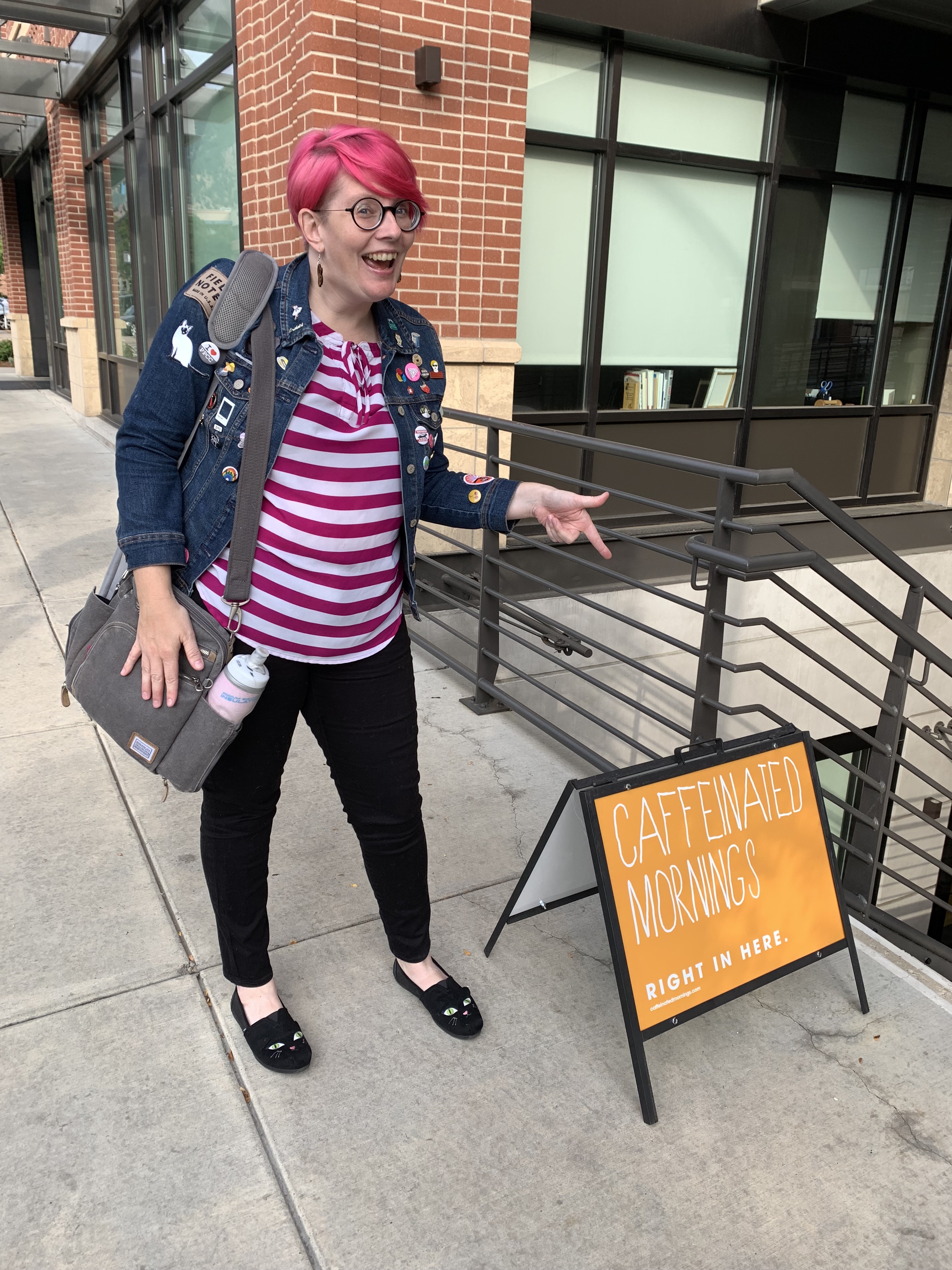