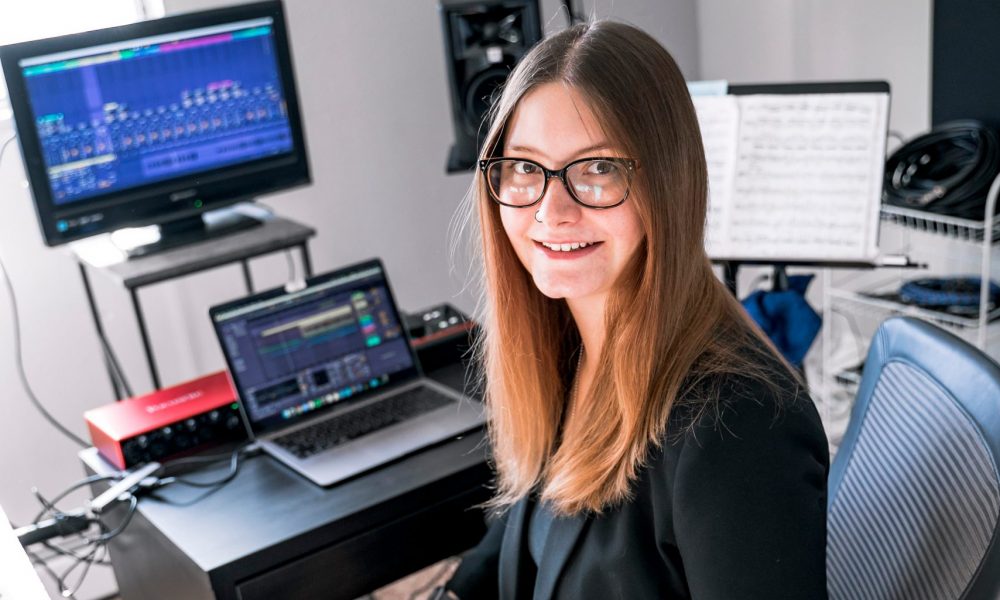 Today we’d like to introduce you to Jessica Jewell.

Hi Jessica, thanks for sharing your story with us. To start, maybe you can tell our readers some of your backstories.
As a child, I was always musically inclined. I started my journey in the middle school orchestra learning viola because it was the closest I could get to playing guitar like Brian May. Then, eventually, I taught myself rock guitar at 13. I was really into active listening and music was my whole life since I was 8. In high school, I signed up for a class at the Career Enrichment Center that was advertised for musicians called “Music Technology”. It was there that I learned the basics of recording and editing audio, and I fell in love with it. I decided to go to CU Denver for Recording Arts in 2016 and it was here in Denver that I found opportunity and my people. I quickly got involved in live sound when I was invited to shadow the engineer at a church in Littleton. When the lighting person had passed away, I unofficially took over for a few weeks as the sound engineer and I really took to it. It was there that I also honed in on my event planning and production managing skills.

In 2019 I became a studio assistant at the school and really advanced my studio chops. I also got to run sound for basically every event that the music program put on, plus for several of the school’s ensembles. Another major event that happened in 2019 was that I found a home with Equinox Theatre Company. I was called in to mix my first musical: “I Love You, You’re Perfect, Now Change” by their former sound engineer. Equinox used the same console that I was learning how to use in the school studio. Sitting down in front of that Mackie console and knowing what each button and knob did, and also being PAID for that knowledge, was the first time that I ever felt like a real sound engineer. I also became their sound designer, and even won BroadwayWorld Denver’s award for Best Sound Design of a Musical for Sweeney Todd in November 2019. I stuck with Equinox until the pandemic hit in March 2020.

Once the pandemic hit, I was close to graduating from CU Denver and I had no idea what to do. Here and there I have gotten to live mix for various shows, such as the The Spark’s Songs for a New World, the Colorado New Musical Festival, and Tango on the Rocks. It just wasn’t the same career prospects in live sound that I was experiencing before, though. I was on unemployment and my savings was growing because I was being supported by my partner’s family. I decided to take the opportunity and downtime to get a bigger apartment and build a home studio.

From my home studio, I have recorded, mixed, and mastered various projects for my friends to build my portfolio. I also edit and sound design a theatre podcast with my former Equinox family, directed by Kathryn Gourley, called Travesty Hall. I also started teaching violin, viola, and art to pay for this home studio. It was all thanks to my connections at Castle Rock Music and the portfolio that I was able to build that I landed the job of a lifetime: assistant engineer at Tenderdyn Arts.

Tenderdyn is one of the only Dolby Atmos studios in Colorado, where artists like Purnell Steen, Lisa Downing, and Vohn Regensburger have recorded. Since starting at Tenderdyn I have had the opportunity to work on immersive music projects such as my partner, Dylan Kober’s, single “Stillwater”, and the feature film “The Longest Walk: The Charles Burrell Story.” Moving forward there are many opportunities at my feet with this studio, and I am grateful for the opportunity to be at the cutting edge of music technology. So many exciting clients are coming through our studio now, but I can’t share all of that just yet.

Alright, so let’s dig a little deeper into the story – has it been an easy path overall, and if not, what were the challenges you’ve had to overcome?
One of my biggest struggles in the past still plagues me to this day: impostor syndrome. Anticipating a gig going wrong and thinking that I won’t know what to do is my biggest enemy. I know that I am proficient at what I do, but when I am preparing for a gig, there is something in my mind that is always telling me I’m not good enough. Every once in a while, too, (and I’m sure many female or nonbinary engineers can relate), there is a man telling me that as well. At this point in my career, I am moving towards more advanced gigs and being given harder tasks, and there is something that tries to hold me back from these opportunities that has been engrained in me since I was a child: I am not a man, and therefore I am not meant to be a technician, an engineer, an authority figure, etc. I am meant to be seen but not heard. It can be so hard to believe in my own point of view and my own knowledge when there are so many forces out there telling me not to. I have found ways around the performance anxiety that arises from this inner conflict, and I find inspiration in other engineers who struggle the way I do, but I have not yet cured my imposter syndrome.

Alright, so let’s switch gears a bit and talk business. What should we know about your work?
I am an audio engineer and musician. I specialize in studio engineering, immersive mixing, live sound for theatre, dialogue editing, and sound design. I work at New Terrain Brewing occasionally as a live mixer, I record, edit, and design the podcast Travesty Hall, I run a home studio and live sound company, and I am the assistant engineer at Tenderdyn Arts. I am most proud of my accomplishments with Equinox Theatre Company as a sound mixer. It was there that I was able to truly marry my musical inclinations with mixing, and I think that’s what sets me apart as both a live mixer and a studio mixing engineer. I am also very proud of the work that I am doing on the Charles Burrell documentary as a dialogue editor. The fact that I get to do my part in sharing entertaining content, great music, and inspirational stories makes me feel very fulfilled as an engineer.

Are there any books, apps, podcasts, or blogs that help you do your best?
Soundgirls.org has made all the difference in my life. The stories and resources they feature inspire and educate me above everything else. Just knowing that there is an organization competing against the lack of diversity in the audio field makes me feel more hopeful that I can be accepted and embraced as an engineer. Audiotools is also a very necessary app for the beginning sound engineer. 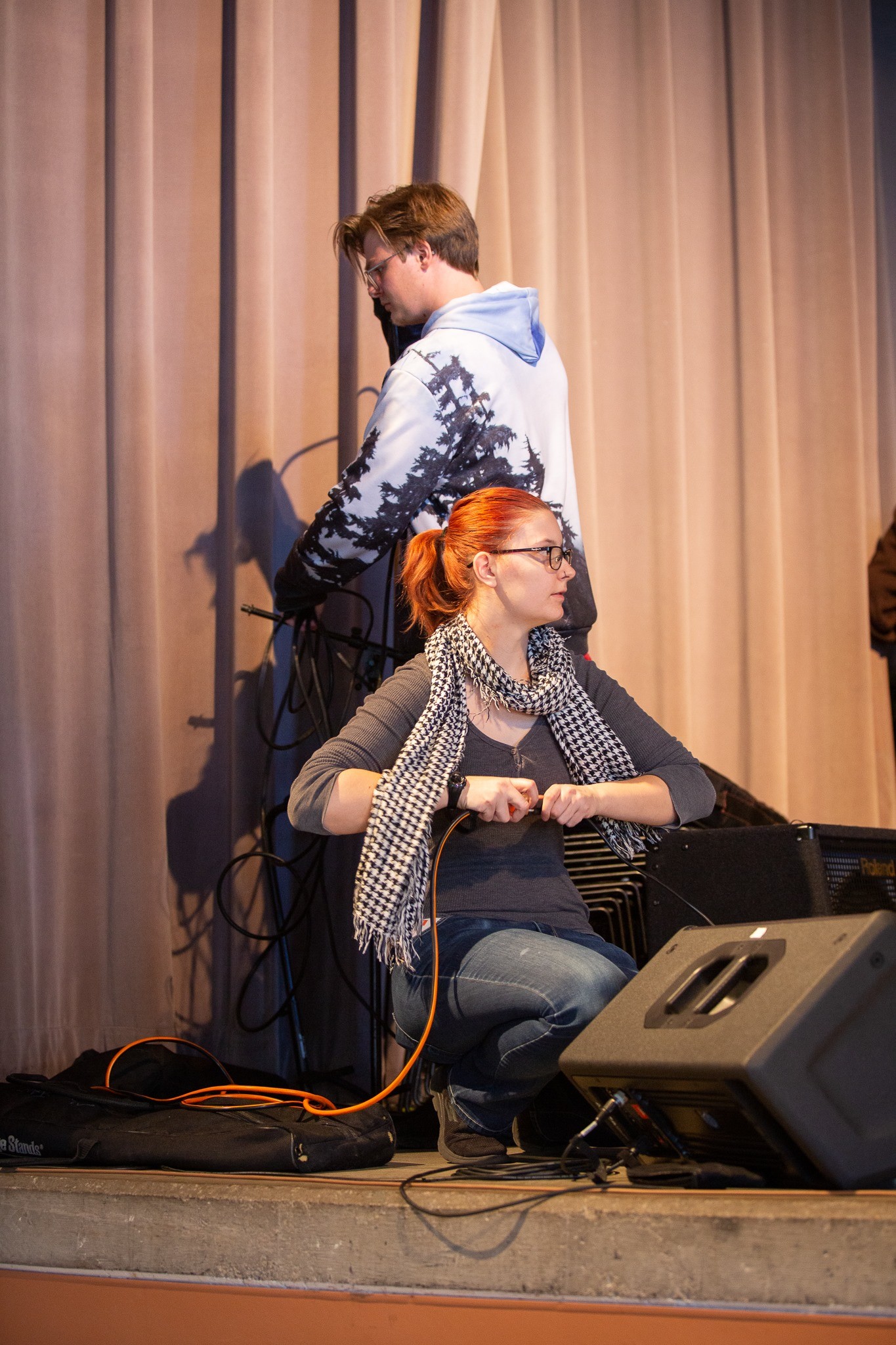 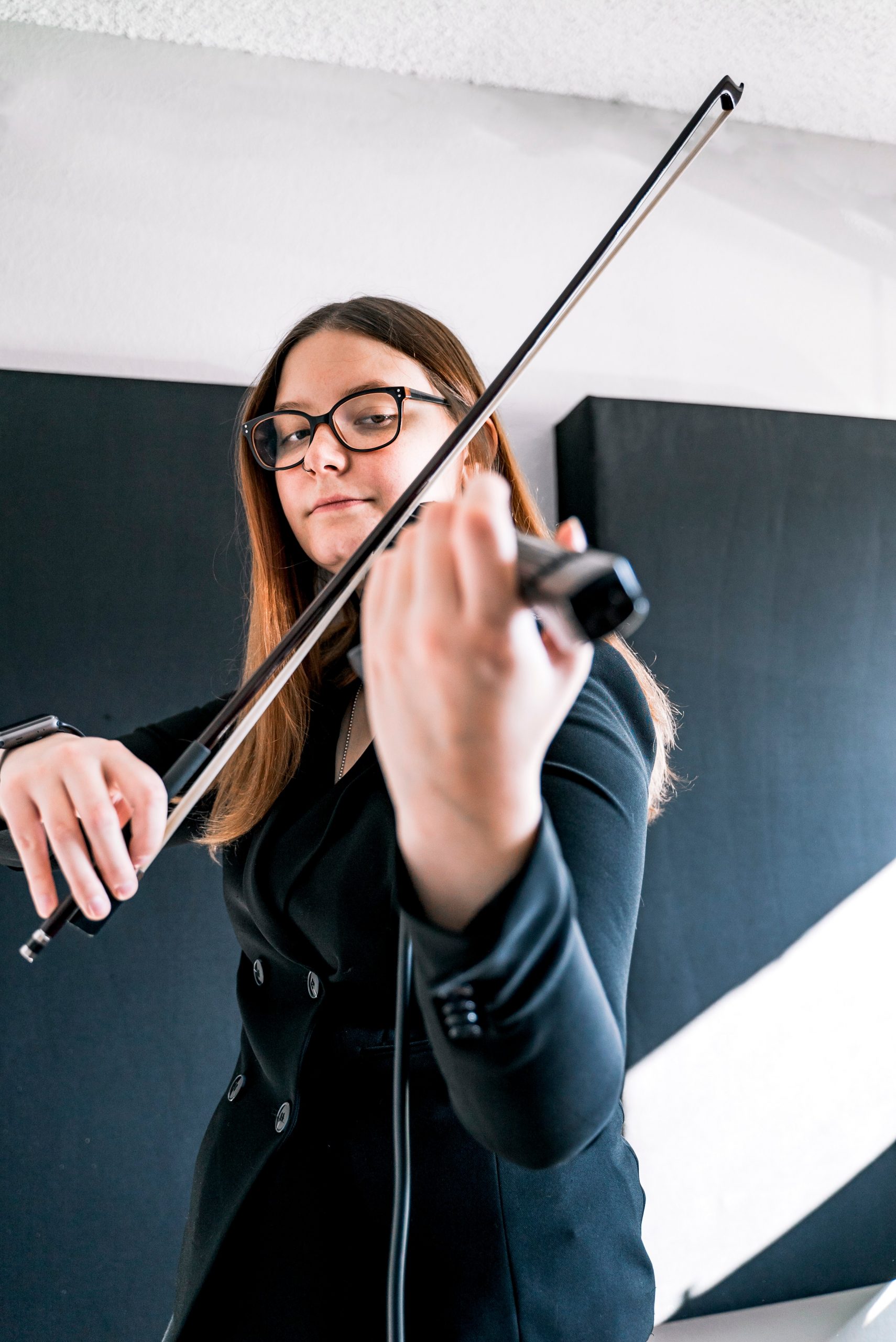 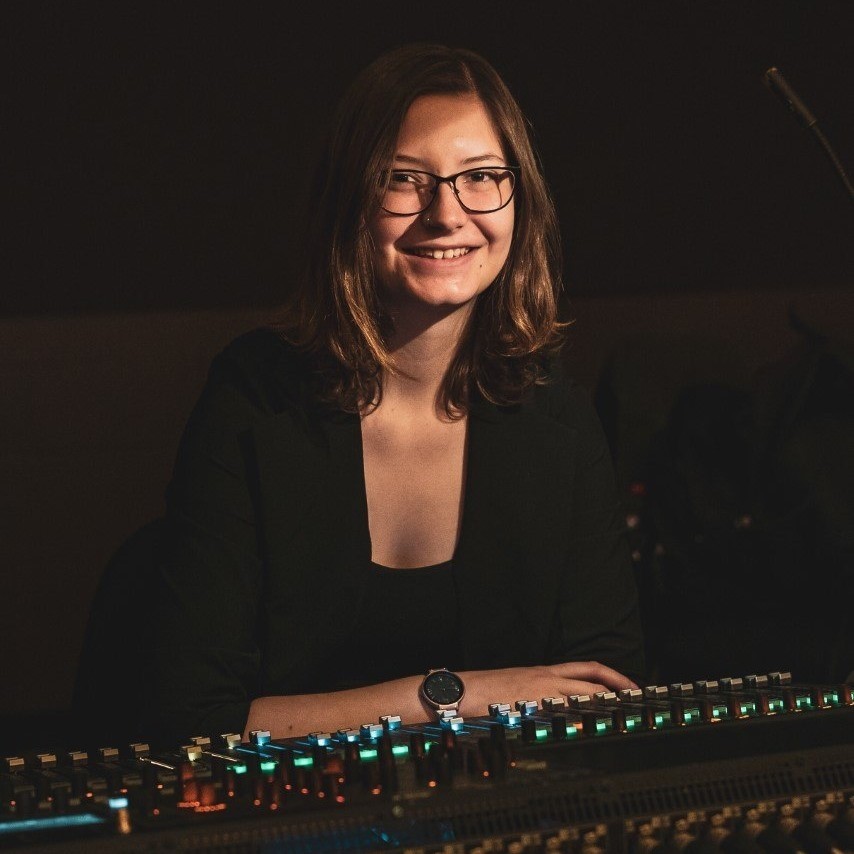 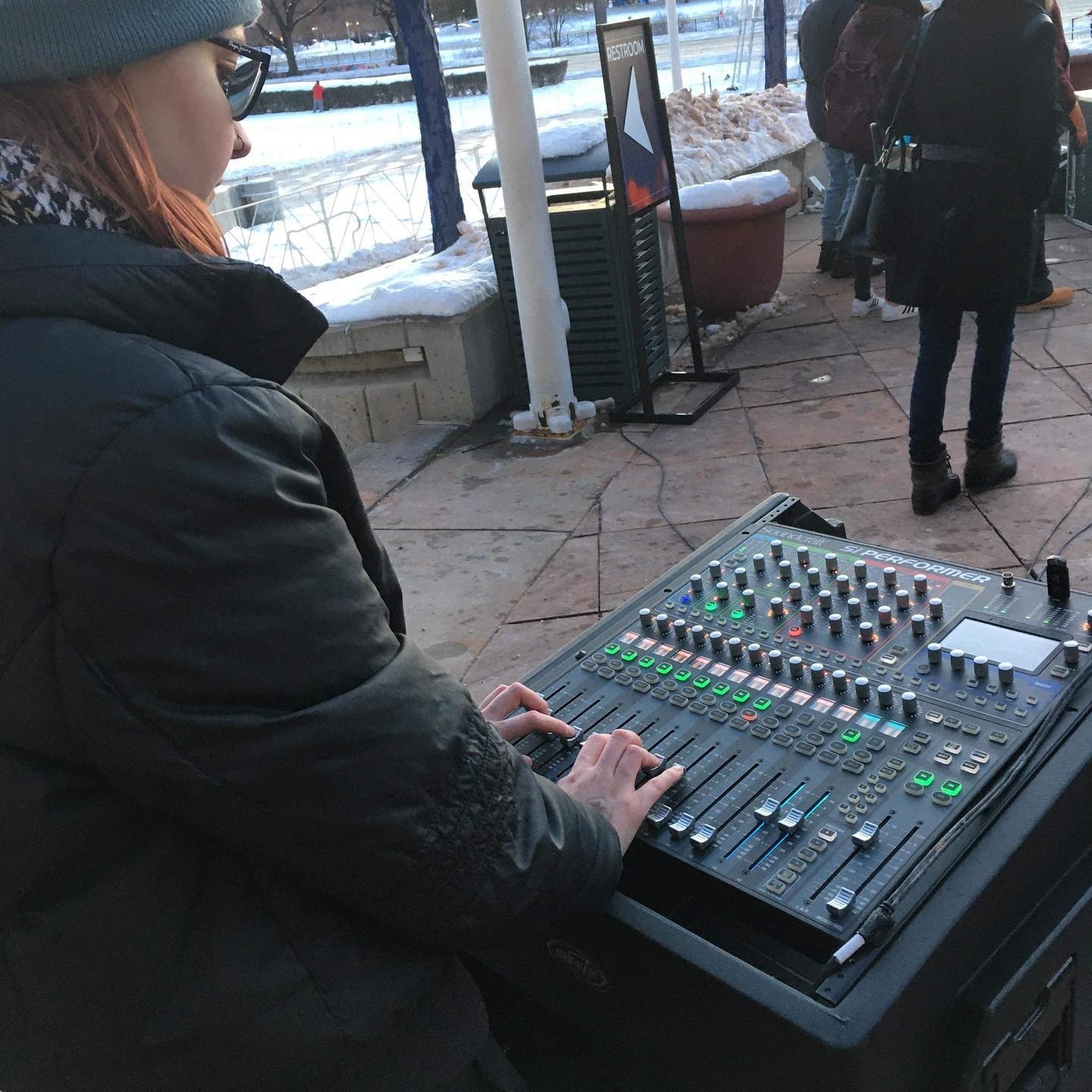